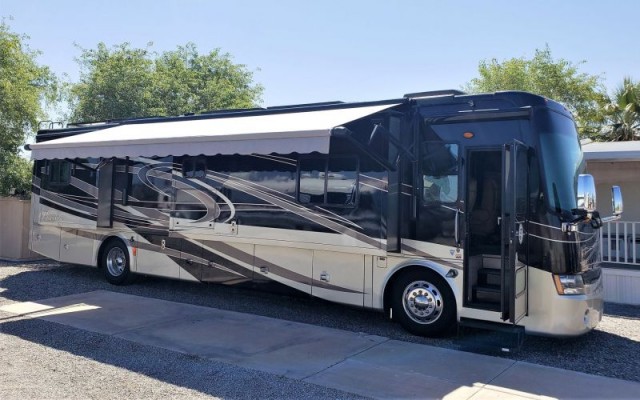 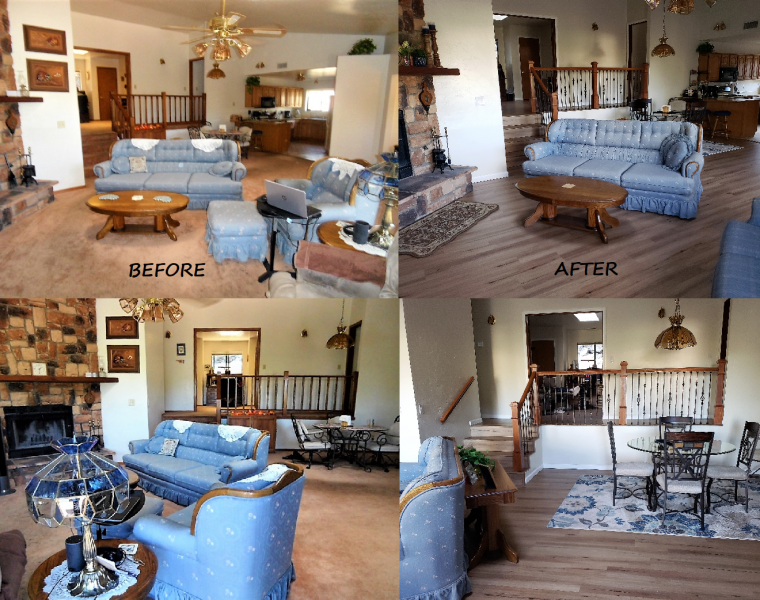 It's hard to believe that we've been in Prescott, Arizona for almost a year now. We moved here mid-July, 2020. We bought Larry's parents house and have been busy repairing and upgrading it. Some of the work was contracted out, and we did some of it ourselves. It's been fun. We're finally finished with all of the big projects we had planned.  Here's the major projects we completed: 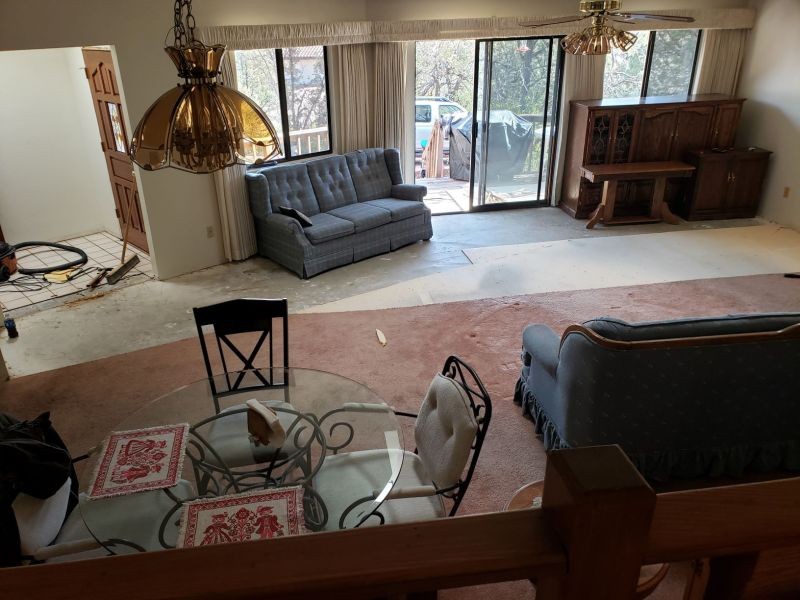 The house had 33+ year old laminate flooring and carpet. It was pretty worn down. We had ceramic tile installed in the kitchen, laundry room, and two bathrooms. The rest of the house got wood-looking luxury vinyl plank flooring.

While the interior paint wasn't too bad, there were several places that needed the drywall repaired. We could also see variations in the existing paint from previous repairs. We had some holes and repairs done, with the entire interior being painted.

Since new flooring was going in, the baseboards needed to be removed. We decided to replace all of the baseboards and door casings. While Larry liked the existing wood finish, we replaced them all with larger baseboards painted white. This was a DIY project. Larry became proficient making miter cuts and Connie became pretty efficient with the caulk, filling in corners and splices. We're proud on how they all turned out. 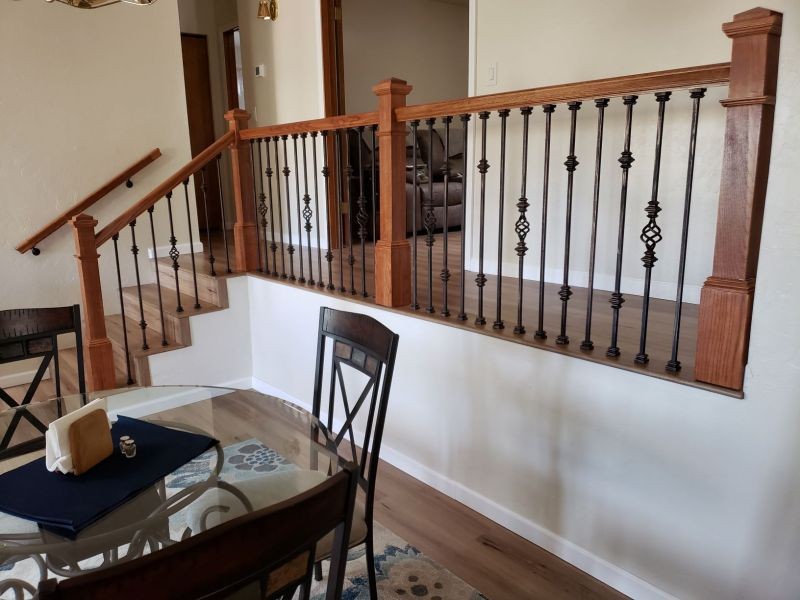 As part of the flooring replacement, we tore out the existing wood railing. When the new flooring and stairs were finished, we installed new posts and railing, using iron balusters. This was another fun DIY project that (we think) turned out very nice.

An inexpensive way to help update the house was to replace all of the light switches and electric outlets to a modern "designer" look.  As part of this DIY project, we also added several home automation switches to several lights.

When we moved into the house last July, the Air Conditioner didn't work. Since we were preparing the house to be sold, Larry's Dad paid for a new Air Conditioner and Heater. The existing unit was 33+ years old. This was a frustrating project, as the contractors changed plans after their initial quote. Eventually, it all worked out. We're very happy with our new A/C, especially since we've been having 100° + heat lately. 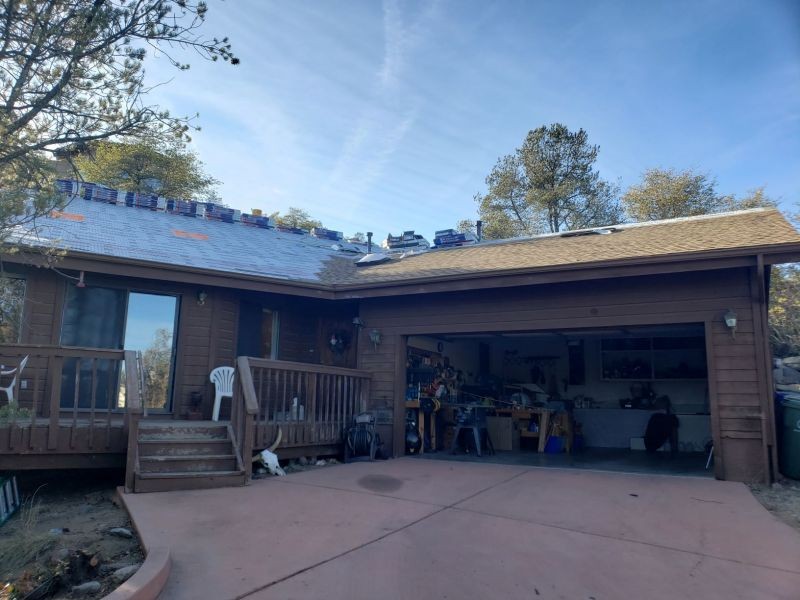 New roof being installed, This is the old decking, lighting, and paint.

The house had the original roof, pretty much down to bare asphalt. Luckily, there were no (known) roof leaks. It needed to be replaced. It looks good now!

This was one of the most needed projects. The house paint was very weather worn and made the entire dwelling look terrible. We were worried about some of the wood siding as it was very weather worn. I thought some of the boards needed to be replaced, but the painters assured me it would look fine once painted. We kept the current color of the house, but changed the color of the trim and garage door. It turned out fantastic! The house looks 200% better now! 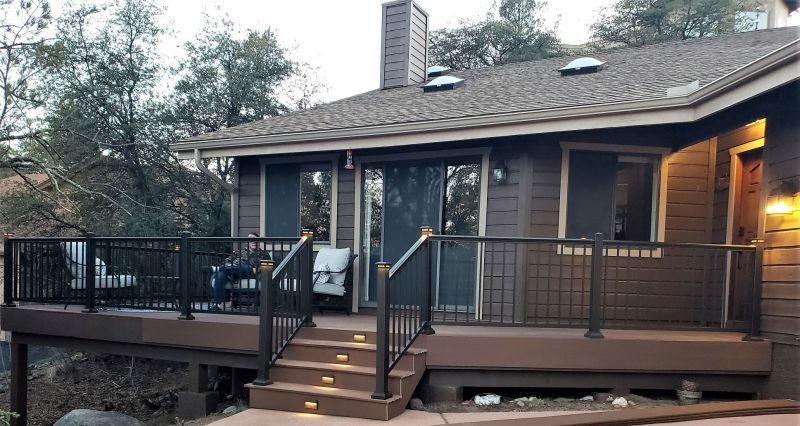 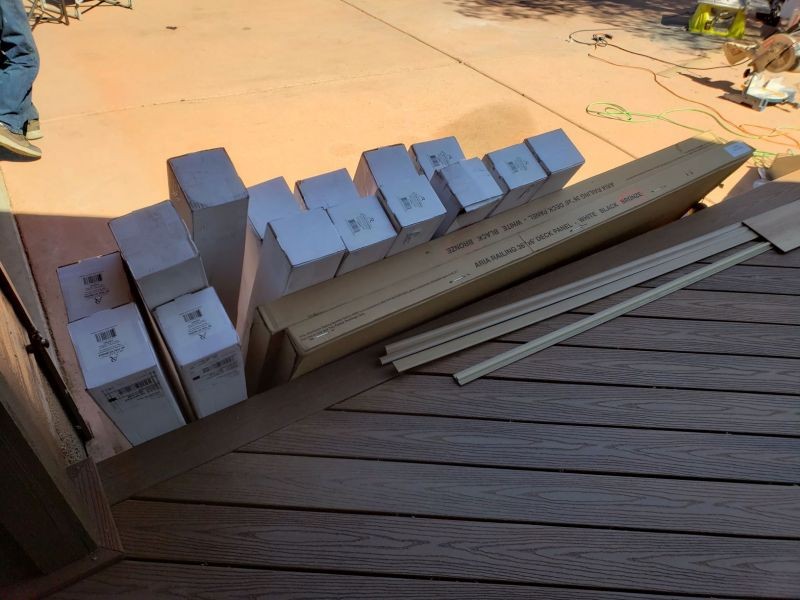 Railing waiting to be installed. 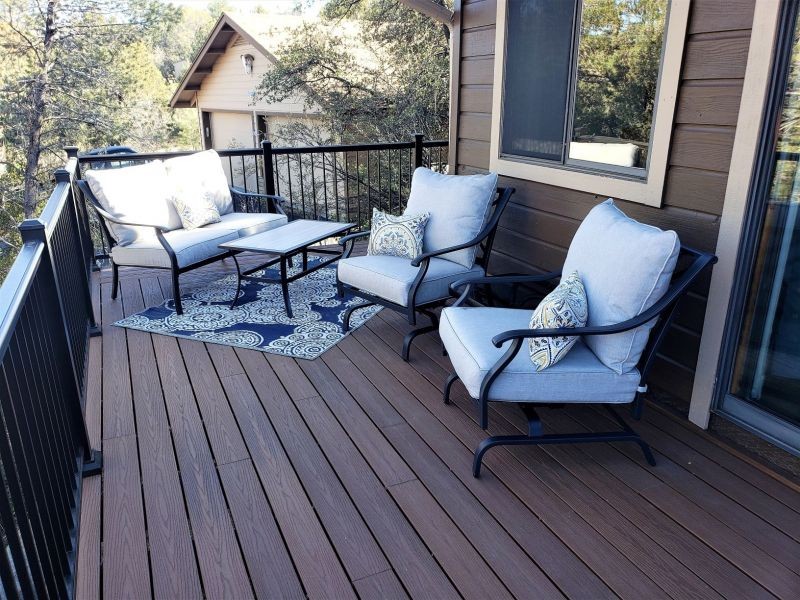 The original deck was extremely worn. The corner support post had rotted, causing the entire deck to have a 6" slope. The wood decking was very fragile and rotted, with several patched spots. It looked terrible and was a safety hazard. We had new "Fiberon" vinyl decking installed, replacing the rotted post and footing. Although the new deck didn't turn out as nice as I had hoped, it still looks great. We rebuilt the stairs and replaced the deck railing. Adding lighting to the stairs and railing was also a nice touch. Everything turned out very nice, bringing the house to a new, modern look.

While the existing gutter was in fair condition, it did leak water in a few places. Since we were having the roofing replaced, I decided to also have the rain gutter replaced. It wasn't expensive, but contributes to the newer look of the house. 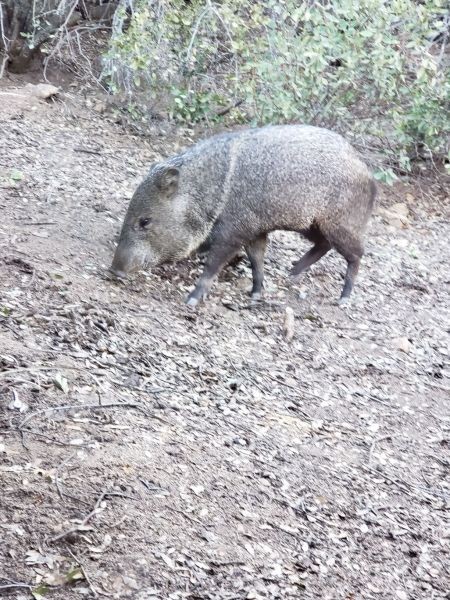 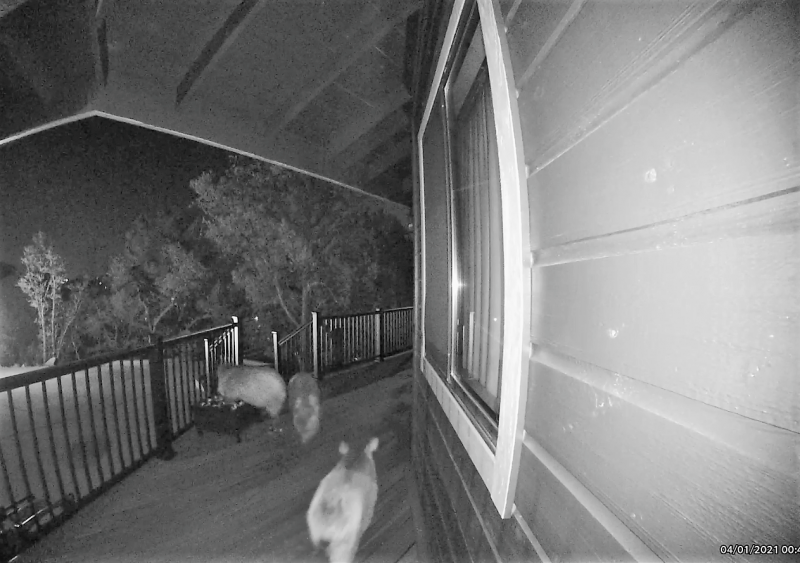 Javelina caught in the act! 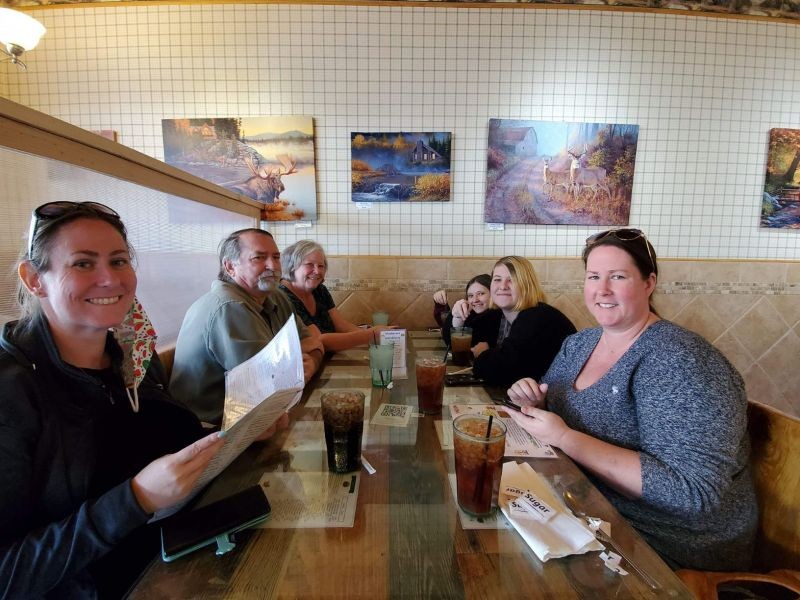 The entire family together again. 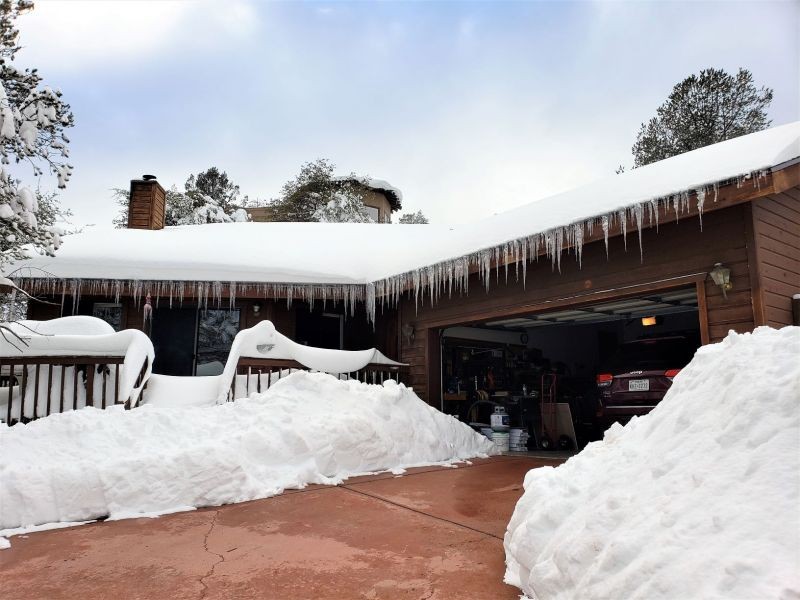 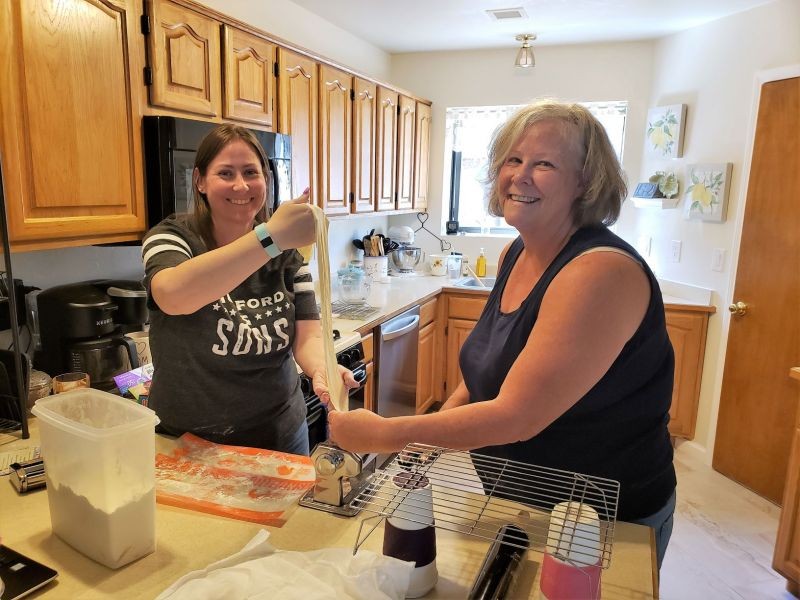 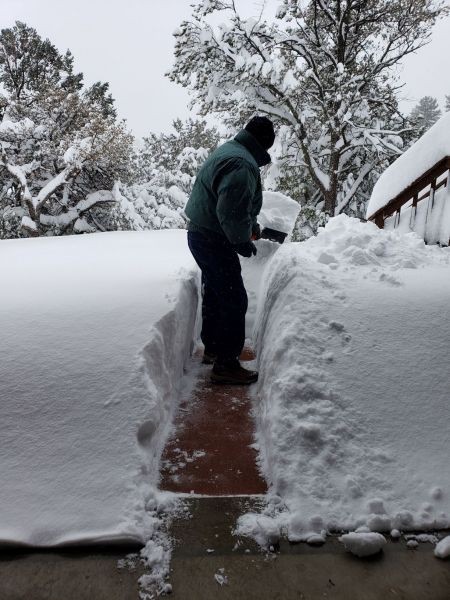 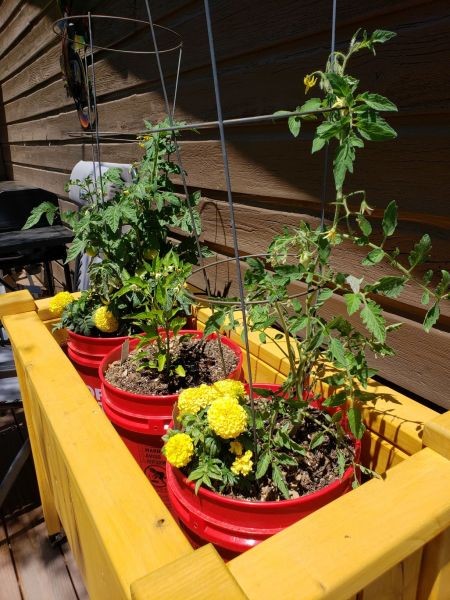 Between home improvement projects, Connie's been slowly decorating the house. This is probably what she missed most while we lived in the motorhome. She enjoys decorating and making her house a home. We sold some furniture and purchased some replacement furniture. We had a large garage sale, selling about 2/3 of the "stuff" we no longer need. The rest will be donated to charity. We've also been enjoying having a patio garden. However, we quickly learned to protect our veggies from the neighborhood thieves. Javelina are very common here.

We've seen our youngest daughter, Cynthia, several times this past year. She only lives a few hours away. Our eldest daughter, Leslie, and grand-daughters Kaylee and Khloe came down from Seattle, Washington to visit for a week.

Probably the most shocking news in our life is the decision to sell our beloved 40' Tiffin Phaeton motorhome. We bought her new in 2010 and traveled and lived in her for the past 11 years. Since we now have a sticks and bricks house again, we decided we didn't need that large of a motorhome. We emptied her out and couldn't believe how much stuff we had in the RV. We cleaned her up and placed an ad in RV Trader to sell her. She was sold to the 2nd person looking at her, although that sale isn't 100% completed yet. The buyer's loan company should have our payment ready at the end of the week.

In the past 6 months, we've only taken the RV out once. About a month ago, we took a week's trip to Yuma, Arizona. This was partly to just "get away", but was primarily to have some maintenance done on the rig. The main awning was ripped and needed replaced. We also had the front two slide-topper awnings replaced. A complete oil change and servicing, along with a good wash and wax and she was ready to be put up for sale.

While in Yuma, enjoying our 2 week vacation, we met up with some of our RV friends. It had been a long time since we had given hugs to our friends. We also met a new couple that were parked across from us. It was great that we made our happy hour (which started around 3pm) at the RV park's pool and usually lasted several hours. On Cinco de Mayo we invited Bill and Sharon to join us on a trip down to Los Algodones, MX. They had never been there, so we were happy to show them around. We even bought a few metal pieces for our deck. We enjoyed lunch and we crossed back over well before the border closing time of 2pm!

Our new travel plans are actually part of our previous travel plans. We're re-thinking about traveling in Europe again. Since we've been vaccinated for COVID and the international borders are opening again, we've made plans to visit France and Germany this summer for a month.  We'll be flying into Paris, France, where we have a motorhome reserved for the month. We'll spend the first week touring Paris and visiting EuroCampingCars.  This is a business that helps non European citizens license a motorhome in France. We'll then spend a week to slowly travel North to Düsseldorf, Germany, to attend the Caravan Salon (motorhome show). We'll be there for a week looking at various brands and floor-plans of motorhomes. We'll then take another week to return to Paris for our flight back. This trip is to "test the waters". An option we're considering is to purchase a motorhome in Europe and travel 6-months there, and return to the Arizona house for 6-months.

That pretty much catches us up for now. With Europe travel plans back in full swing, I'll be sharing what we're up to more frequently.

Missed hearing your stories and look forward to your new adventures!

Can’t wait to hear about your adventures in France & Germany!

Things are falling into place and looking good. That is awesome! Looking forward to your adventure updates. Safe and fun travels!

1 Cancel Reply
Things are falling into place and looking good. That is awesome! Looking forward to your adventure updates. Safe and fun travels!
Cancel Update Comment

You will love exploring Europe in an RV. We did it many years in camper vans starting in 1989. We were glad we did it then because now we are not as adventurous. Go for it!! We will be looking forward to reading about your adventures. Hugs, Mary & Elaine

1 Cancel Reply
You will love exploring Europe in an RV. We did it many years in camper vans starting in 1989. We were glad we did it then because now we are not as adventurous. Go for it!! We will be looking forward to reading about your adventures. Hugs, Mary & Elaine
Cancel Update Comment

Mary, you made me laugh! You and Elaine are still the most adventurous people we know!! We are very excited and a bit anxious though.

0 Cancel Reply
Mary, you made me laugh! You and Elaine are still the most adventurous people we know!! :D We are very excited and a bit anxious though.
Cancel Update Comment

When I first read that you had a "house", I quickly panicked at the thought of you guys giving up this site. Then I read more, and now I am looking forward to your reports about famcamps in Europe, if there are any. What fun. Congratulations!

0 Cancel Reply
When I first read that you had a "house", I quickly panicked at the thought of you guys giving up this site. Then I read more, and now I am looking forward to your reports about famcamps in Europe, if there are any. What fun. Congratulations!
Cancel Update Comment

Thanks Paul, There's not many U.S. Recreation Facilities in Europe. Only one I can think of, in Germany. But we'll still be keeping up with the U.S. Military Campgrounds and RV Parks website, since we'll have Internet access anywhere we are.

0 Cancel Reply
Thanks Paul, There's not many U.S. Recreation Facilities in Europe. Only one I can think of, in Germany. But we'll still be keeping up with the U.S. Military Campgrounds and RV Parks website, since we'll have Internet access anywhere we are.
Cancel Update Comment