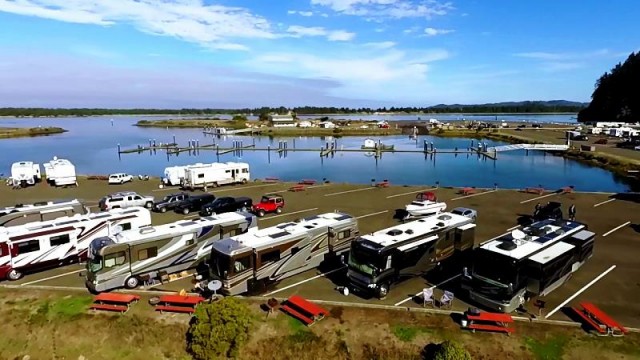 After returning back to the "lower 48", we stayed at the Angel of the Winds Casino on Aug 27th for the night (free, 48.215229, -122.183998) again. This was the same casino we stayed at before going into Canada. They've recently created a new dry camping area on the northern parking lot. Food is still good there. We then headed to Burien, WA and stayed at the Elks Lodge RV Park for 2 weeks (Aug 28th - Sept 11th, $20 a night, 47.47728, -122.33358). Our daughter Leslie, her hubby Andy, and granddaughters Kaylee and Khloe live nearby. This Elks Lodge is the best location for us to stay with the RV. There's just no RV Parks close by. We've stayed here many times before and like it there.

During our two week stay, we did a lot of bonding and watching of Kaylee and Khloe. They were scheduled to start school, but the school district went on strike. Leslie also started a new teaching job, but she started work before the girls were to start school. It was good timing for them that we were in the area. It was also good for us, as we only get to see them once or twice a year. As usual, Grandma Connie helped supplement their new school clothes wardrobe.

The primary reason we changed our return route from Alaska was to attend the Boomers "Crabarang" in WInchester Bay, OR. The "Boomers" is a social sub-group of the Escapees RV Club. We've been with this group for over 13 years and have many friends. For the past few years, many of the Boomers have got together in Winchester Bay to go crabbing (catching Dungeness Crabs). But we've never been able to attend as we're normally still working until mid-October. Since we took this year off working, THIS was the year we could attend the "Crabarang".

We arrived a bit early on Friday Sept. 11th and will stay until Sept 27th. The event didn't start until the 17th. Being the weekend, the entire marina was about full. The Winchester Bay marina (43.680672, -124.181519) has numerous RV parks and campgrounds. They've also converted most of the large paved parking lots into dry camping RV spaces. For $15 a night, or $90 a week, you can dry-camp in the parking lot. They do have restrooms, hot showers (fee), and a fee dump station. We took what seemed like the last open space and were going to relax until friends arrived.

We didn't have any plans made to work again next summer. But we did tell our summer employer that we wanted to take this year off (2015), so we suspected they would make us a job offer for 2016. This job offer came on the Sunday after we arrived here. They asked if we wanted to be the Operations Manager and Admin Assistant in the White River National Forest of Colorado. We had previously mentioned to them that we would like to work in Colorado (we're tired of returning to California each summer). We got permission to fly out to Colorado and check out the area and see where we would be living for the summer. So we flew out of Portland OR on Tuesday to Denver CO and returned on Saturday. We felt safe leaving the RV at the marina. Bottom line - we loved the area and accepted the jobs for next summer. We'll be managing the USFS campgrounds in the Dillon Lake and Vail areas, which is about 90 miles west of Denver. These are beautiful areas at around the 9000' elevation.

When we returned to Winchester Bay, many Boomer friends had arrived and the "party" had begun. It was great catching up with each others travels and lives. Connie rented a couple crab pots and tried catching us some crabs. The RV camping sites are right next to the crabbing docks. Monday, Connie also went with some friends on a Rock FIsh and Ling Cod fishing charter. The weather was rough and it wasn't the most pleasurable fishing trip, but Connie caught her limit of 7 Rock FIsh (but no Cod). The rest of the week was spent socializing with friends, having potlucks, and playing with my sUAS (Drone). Connie kept checking on her crab pots severl times each day. After 5 days of crabbing, Connie has only caught 2 crabs!!! Actually, she's caught a few dozen, but only 2 were legal to keep. Luckily, friends have taken pitty on her and have "donated" another 4 to her cause. I'm glad she's having fun, but I think she's getting tired of pulling crab pots out of the water to find no "keepers", then tossing the pots back out again.

A couple weeks ago, after leaving Seattle WA, we stopped in Portland OR for Larry to purchase his new small Unmanned Aerial System (sUAS), Flying Robot, Drone, Quadcopter, whatever you want to call it. The new 3DRobotics "Solo" was announced in late May and I'd been doing a ton of research since then. We waited to buy the Solo in Oregon and save on sales taxes. This system is smarter than my original 3DRobotics Iris+, which is pretty smart. Being in Winchester Bay all week, I've had the chance to fly both systems and make a video of the Boomer event. Reluctantly, I also have sold the 3DR Iris+, but at least it's going to a good home - a fellow Boomer. I would have liked to keep both systems, but that wasn't practical.

This aerial video was taken with the original 3DR Iris+. I still need to get some more parts for the new 3DR Solo: