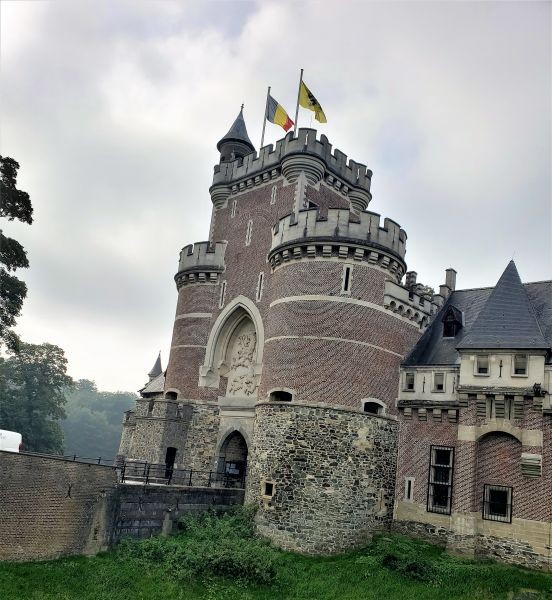 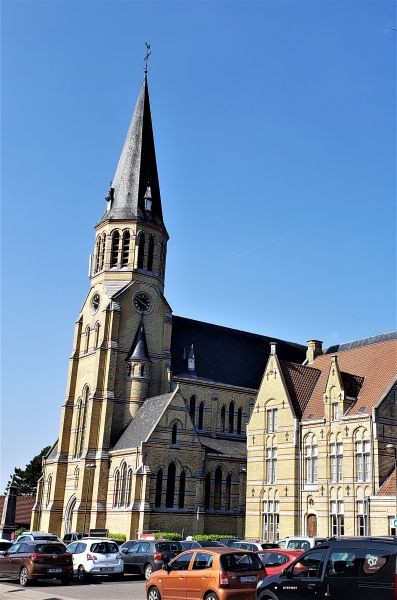 Since we planned to slow down and enjoy the small country towns, our next stop was in Roosdaal, Belgium. We planned to spend a couple nights in one small town, then travel to the next stop. After a few stops like this, we'd be back in Paris.

We hooked up our electric and I started working on the last blog entry. Connie went for a walk and went grocery shopping (again). Don't get me wrong, it's always just a few items. All seemed like this was going to be a relaxing stop. Wrong! It was Friday and later that afternoon, the sporting complex became very busy. It was time for the kid's soccer games. This lasted until way after midnight, and we were just a few feet from the parking and playing field. During the afternoon, another 6 motorhomes came in. Four of them ended up parking for the night in the lot next door (without electric).

We decided this isn't the quiet place we wanted, so we decided to only spend the one night. The next morning, we headed out to see the nearby windmill at Hertboommolen. However, every road that we attempted to use was closed for construction. We could see the windmills not too far away, we just couldn't figure out how to get to them. They were closed (only open on Sunday), but we figured we could at least see it from the outside. Oh well - I gave up the search for a road that was open (if there was one).

Our next tourist spot was the Gaasbeek Castle. We knew the castle itself was closed for renovations, but we'd be able to walk around it and the gardens. The predecessor to the current castle was built in the thirteenth century as part of the wider line of defense to protect Brussels. Over the centuries that followed, the castle was repeatedly devastated and rebuilt. What's there now is pretty and has been renovated several times. We decided not to visit the museum and gardens, as we could see the gardens from outside the wall. The grounds were almost vacant, but we did see a 40' American motorhome, with quad slide-outs in the parking lot. It was spending the night there. How they got it there through these tiny streets and tight corners, we'll never know! This is the first American motorhome we've seen. We did see an American 5th wheel in a parking lot last week. 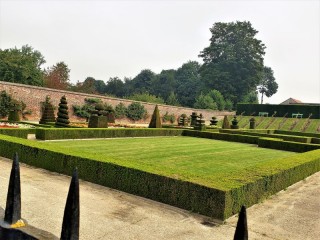 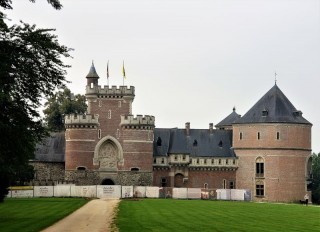 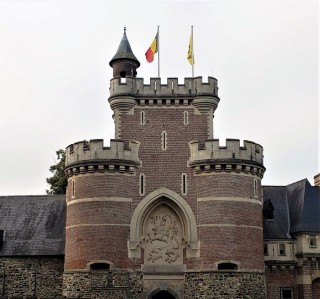 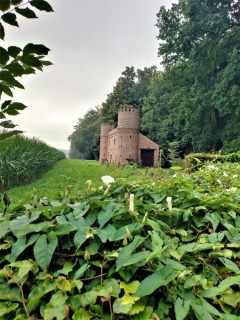 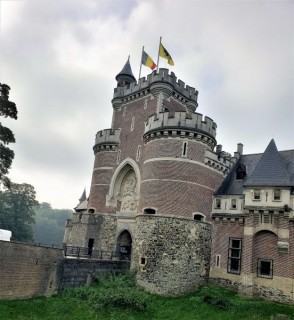 One of the reasons we came to this part of Belgium was to see Europe's largest "Boat Lift". Until 5 years ago, it was the largest boat lift in the world (China has a taller one now).  The L'ascenseur funiculaire de Strépy-Thieu (Strépy-Thieu boat lift) lies on a branch of the Canal du Centre near Hainaut, Belgium. With a height difference of 73.15 meters (240 ft) between the upstream and downstream reaches, it was the tallest boat lift in the world upon its completion, and remained so until the Three Gorges Dam ship lift in China was completed in January 2016.

The "boat lift" works like a huge elevator, lifting water and boats up or down the 73 meters between the Meuse and Scheldt rivers. It's like a vertical lock for boats and barges. This boat lift can lift 1350 tons of boats/barges. This doesn't include the weight of the water! It's massive - much larger than what we expected to see. We were lucky enough to see it lifting (slowly) a boat up the 240 ft. 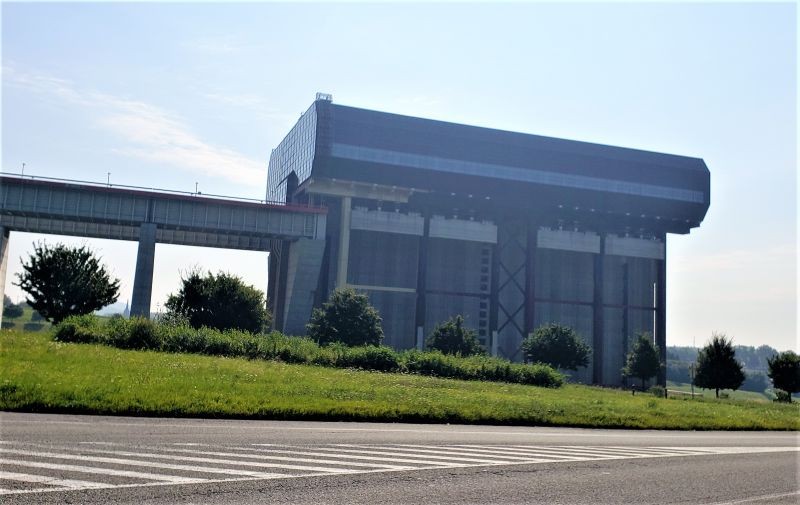 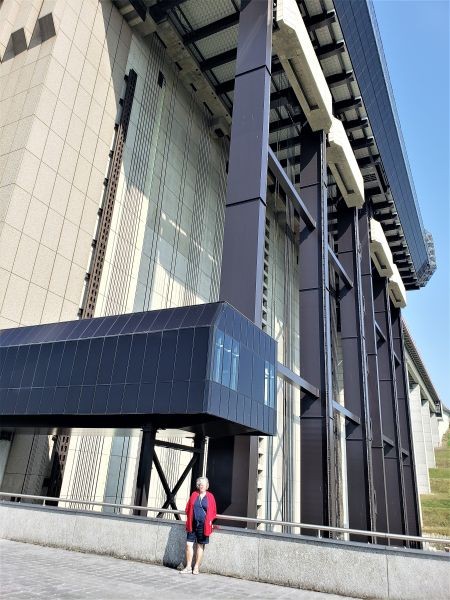 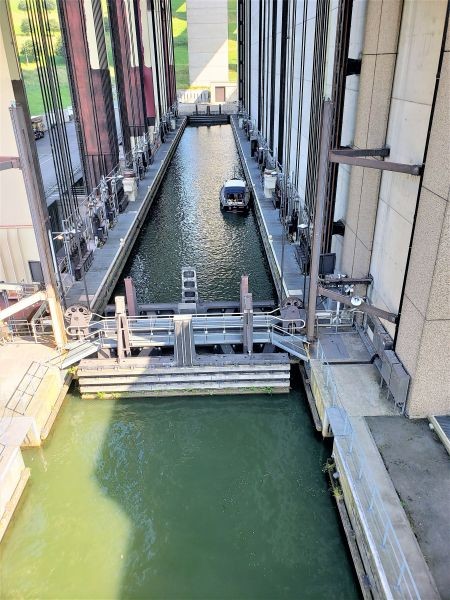 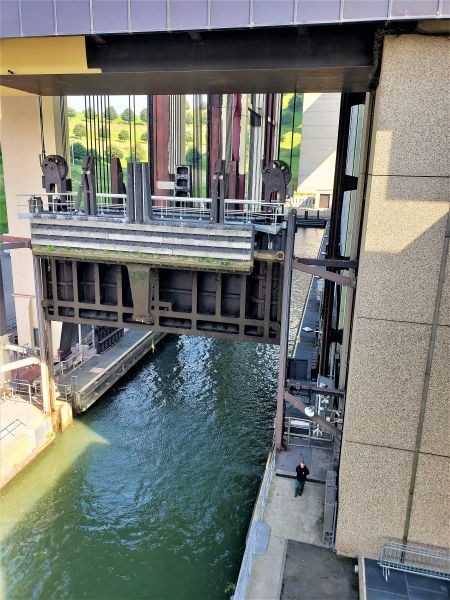 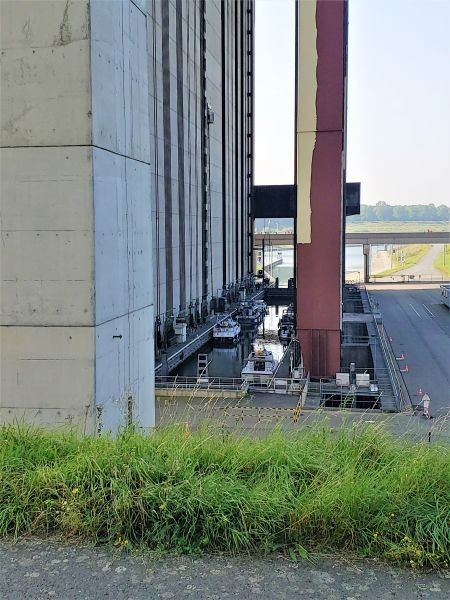 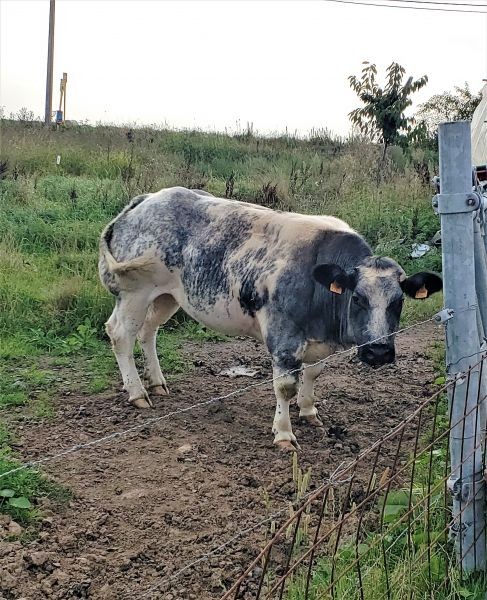 Our host for the night

After our site-seeing stops, we continued on for a couple more hours to Merbes-le-Château, Belgium. I had read great reviews about a farm that invited motorhomes to visit and spend the night. It was free, with free electricity. This sounded like a wonderful place in the country to spend a few days. The trip took us though several small towns. We safely found our way to the farm and parked up, There were 2 other motorhomes there. However, there wasn't any electric to be found. That's okay, we can do without electricity for a couple days.

After a couple hours, the owner of the small restaurant they operate came out and welcomed us. She also had us move to another site, as we were parked in the restaurant's parking lot. It was a nice spot, next to the playground and a cow. We were serenaded all evening by this lone bovine. It was also hot. Again, we decided this wasn't the place we wanted to spend a couple days at. We made a shout out to friends looking for recommendations of where to visit before we returned to Paris in 6 days. They came through, and we've moved on to the next location. Read about it in the next issue....