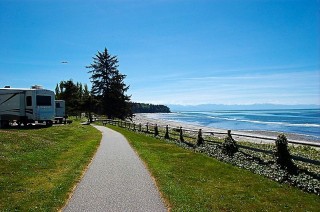 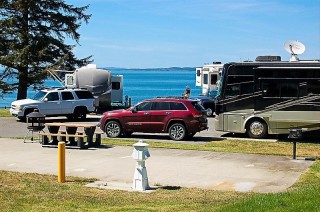 After leaving the Tacoma area, we headed further north to Whidbey Island. We had heard so much about the Cliffside RV Park at the Naval Air Station Whidbey Island and had always meant to visit here. We finally made it and this was a great RV Park. VERY well maintained, with manicured landscaping and plenty of flowers. There's lots to do there and the views are fantastic. The weather was perfect for our short visit. We watched Grey Whales off the shore from our RV.  We toured around Whidbey Island for 4 days, but decided to cut our stay a little short. This would be a good time to take the motorhome into the shop and get the "Check Engine" issue fixed (again).

During the drive onto Whidbey Island, we noticed a Freightliner repair shop near the Interstate in Burlington, WA. We returned to this shop and had the motorhome issue looked at. We were dreading another multi-thousand dollar repair. Luckily, this was a simple $200 fix. The "Fuel/Water Separator Sensor" was the issue. Specifically, the sensor was just loose. I'm sure it was a result of our recent repairs and service. Oh well - all fixed and working fine again (hopefully forever). After only a few hours at the repair shop, we were ready to go visit our eldest daughter and granddaughters in Seattle. This involved heading into the Seattle Friday evening traffic. No way! We drove a short distance and stopped for the night at the Tulalip Casino in Tulalip, WA. A nice casino with a large designated RV Parking area. You're allowed to stay here free for up to 3 nights, but you need to have a (free) players card. We only stayed one night and were ready to head into Seattle on a Saturday morning. This time, there wasn't much traffic. 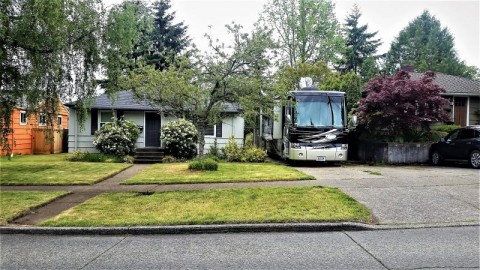 Usually when we visit Leslie in West Seattle, we stay at the Elks Lodge in Burien. They have 8 RV sites with full hook-ups for traveling Elk members. We've belonged the Elks for about 14 years and have used their RV parking many times across the nation. However, this visit, we decided to see if we could fit our 40' motorhome into Leslie's long driveway. Wow! We arrived and the neighborhood was having yard sales. The residential streets are already narrow, now they were filled with cars parking on both sides of the road! This left room for a car to barely drive down the street. I didn't have a choice, as I was already committed. I very nervously made my way with the motorhome down the single lane (two-way) road with about 2" to clear on either side. There was NO WAY we were going to back into Leslie's driveway. At least not until later that evening. Luckily, I found a school nearby and we left the rig there for the day. As evening approached, the streets were clear, but I had problems getting back to Leslie's house. Dead end streets, streets with small "round abouts" at the intersections, and a VERY steep hill blocked my route out. I finally made it back to Leslie's house without causing any damage. Although we blocked traffic, backing into her driveway went pretty smooth. Her neighbors allowed us to partially fill their driveway as well, allowing us to extend our slide-outs. 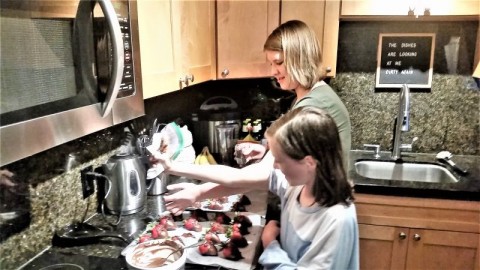 We visited with Leslie, Kaylee, and Khloe for the week. Connie and I did yard and housework for them while they were in school and working. This reminded me of one reason I don't miss not having a "sticks and bricks" house. We also had time to do laundry and wash the motorhome. We visited every evening for this first week. Since we were going to be in the Seattle area and had the time, Connie and I had booked a  week-long cruise to Alaska. The timing worked out good, as Kaylee and Khloe weren't going to be home this second week of our visit, and we had a secure place to leave the motorhome.

In 2015, Connie and I had taken the summer off from working and drove to Alaska. It was a fantastic 4-month trip from Washington state, through British Columbia and the Yukon, into Alaska, and back down to Washington. We drove the Alaska Highway, over Top of the World and returned on the Cassier Highway. We visited several locations in Canada and Alaska, including Chicken, Tok, Anchorage, the Kenai Peninsula, Homer, Denali (Mt. McKinley), Fairbanks, Valdez, and the Article Circle. You can read our detailed Alaska trip log in the 2015 Blogs. 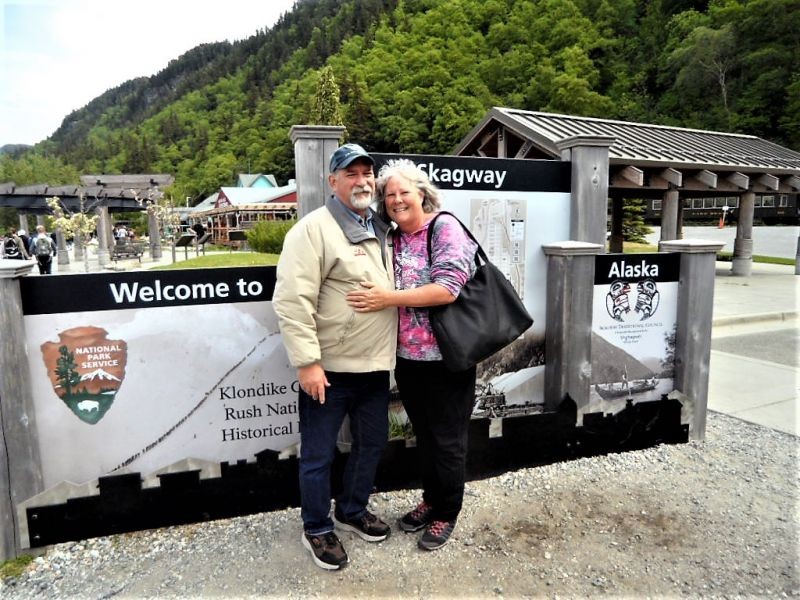 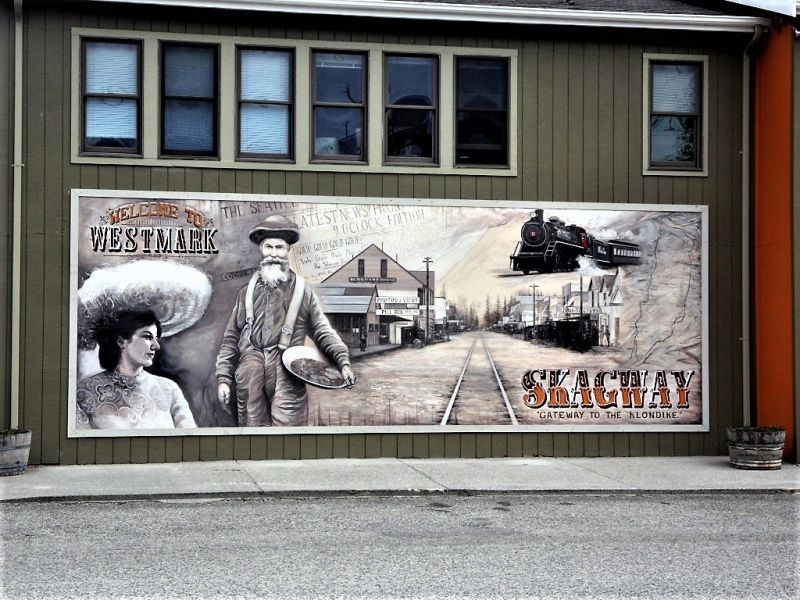 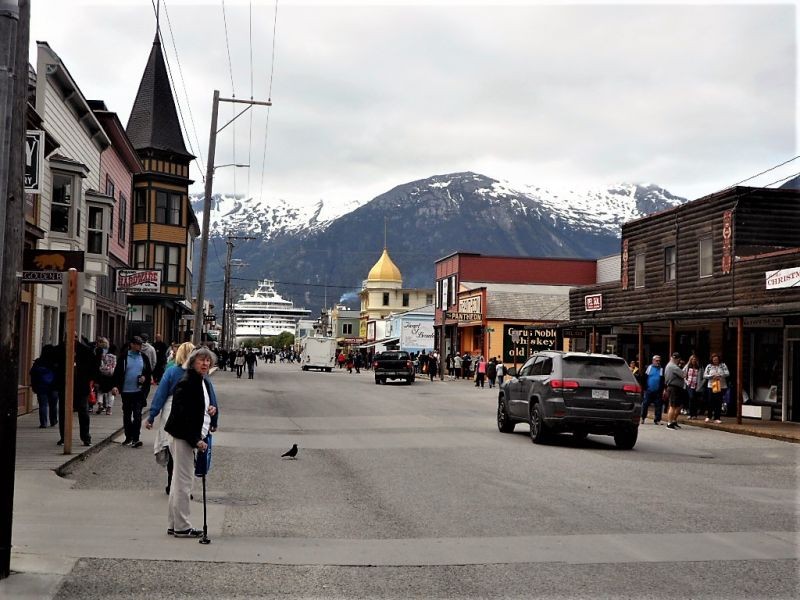 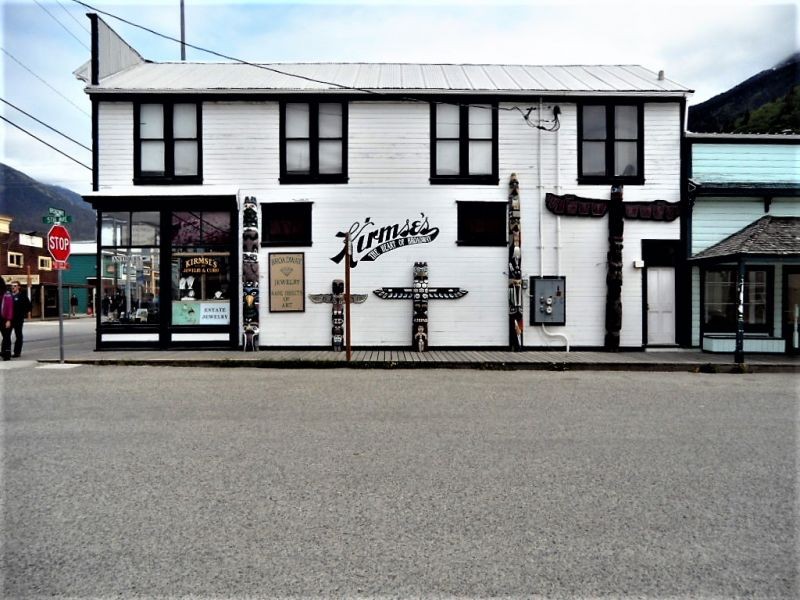 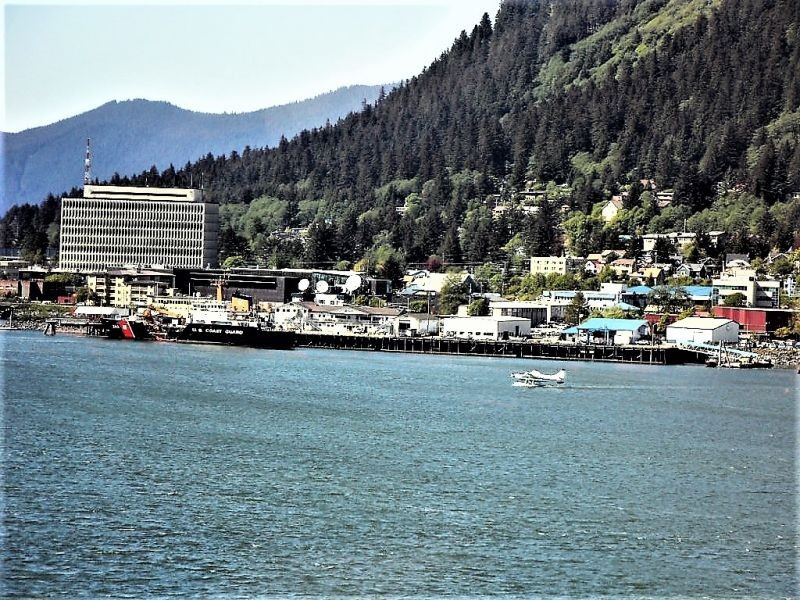 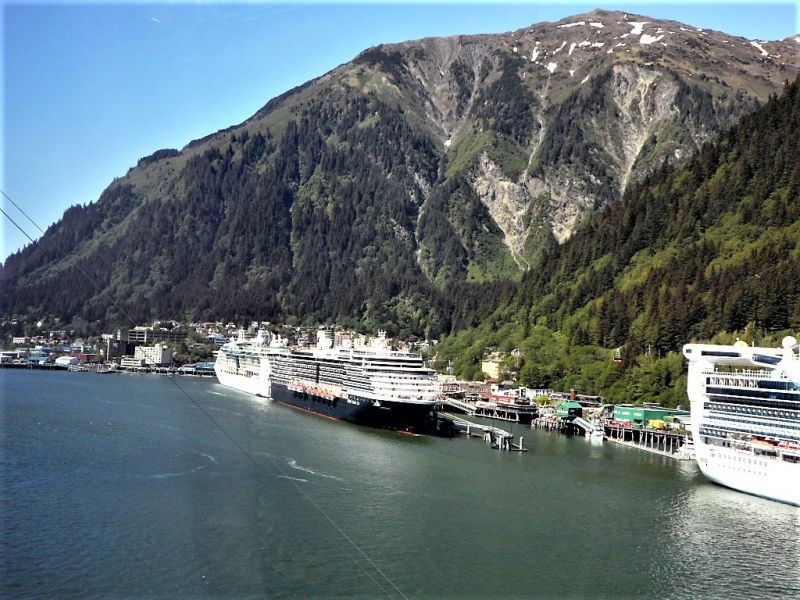 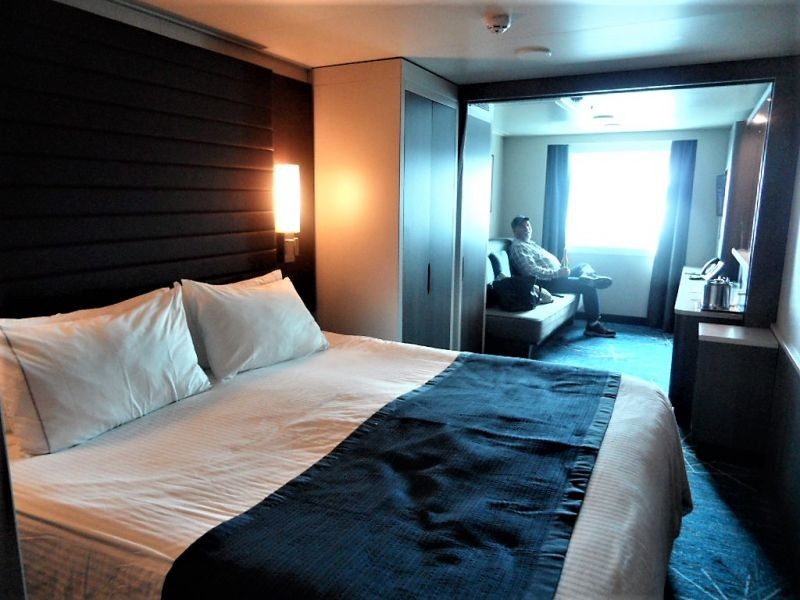 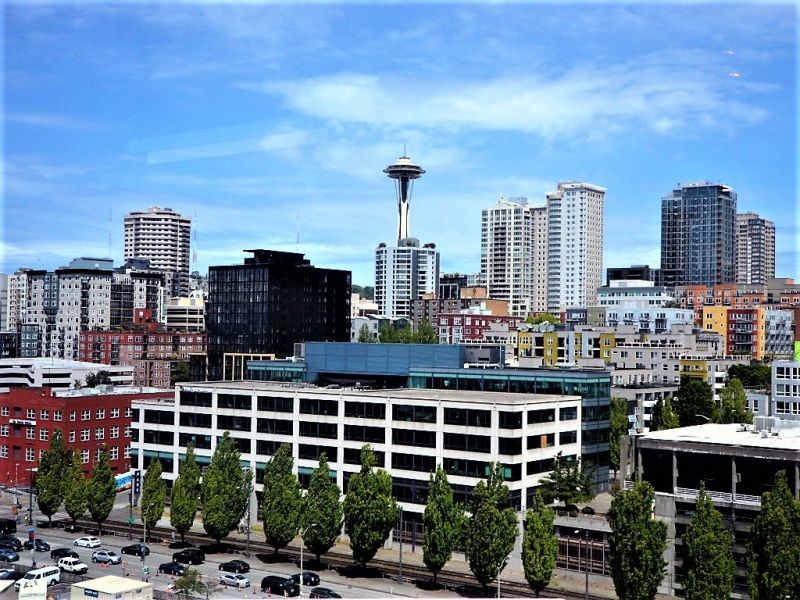 Seattle, WA from the Port 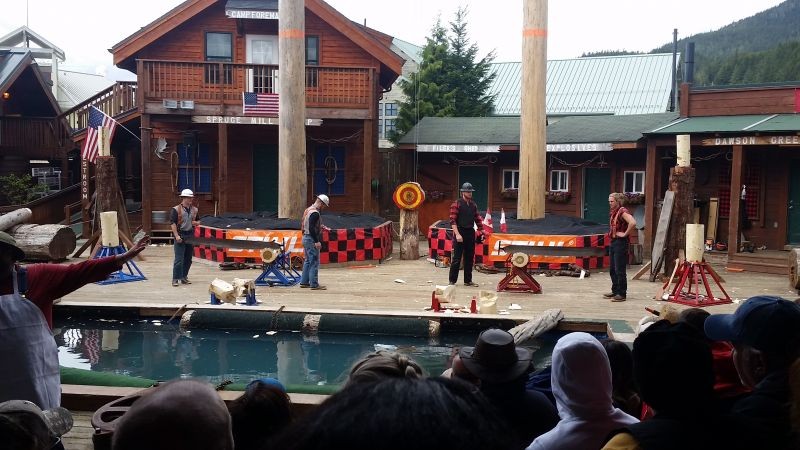 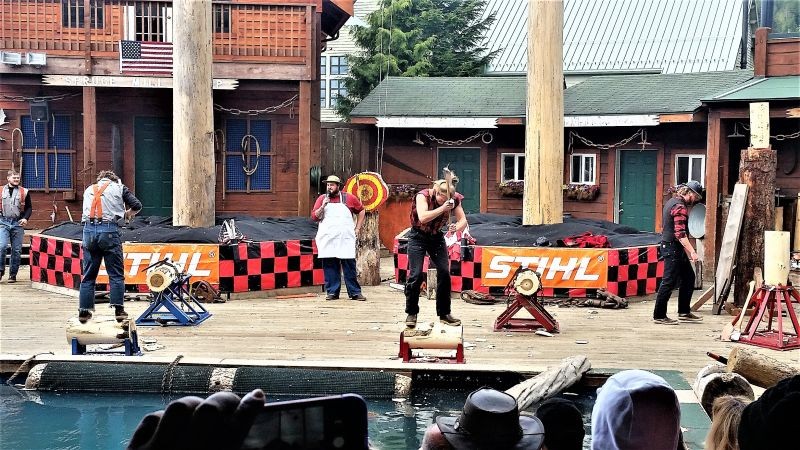 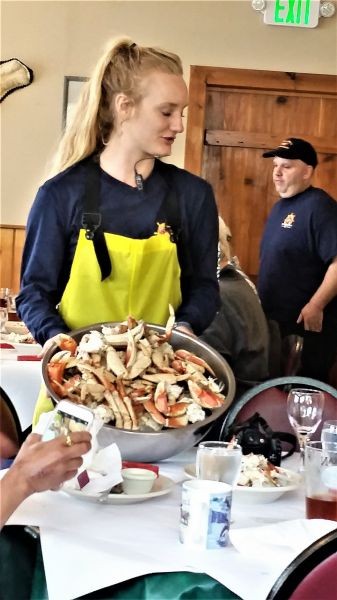 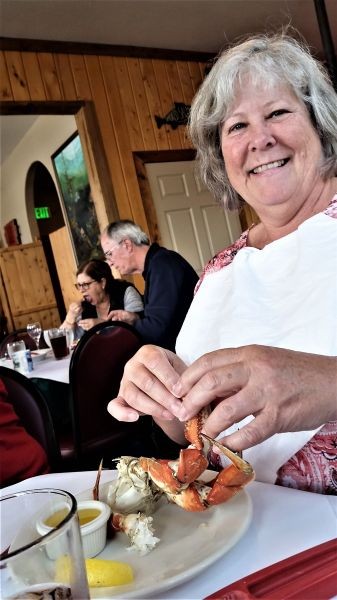 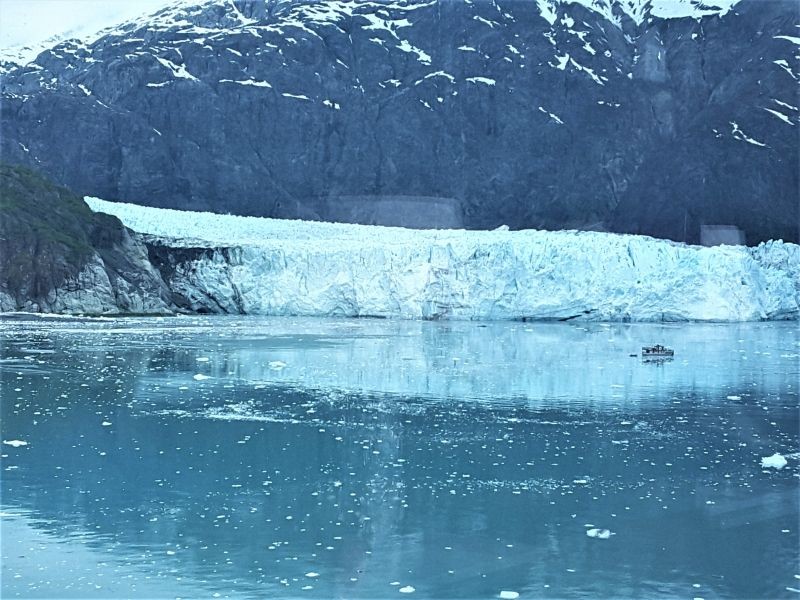 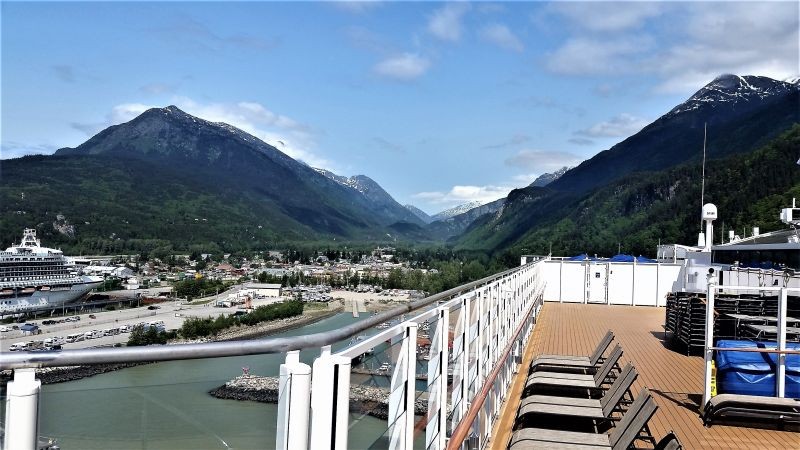 For this short Alaska trip, we took a week-long cruise through the "Inside Passage". We left Seattle with the first stop in Juneau. AK. Next, we stopped for most of the day in Skagway, AK. Then the cruise ship spent half a day floating around Glacier Bay National Park with Park Rangers on board the ship giving us a tour of this large park. You can only get to this National Park by boat or plane. We were able to see a large glacier "calfing", or breaking off a section. We also saw whales, porpoise, and sea otters. The next stop for the cruise was at Ketchikan, AK. Here, Connie and I had booked a side-trip to a "Crab Feast" and Lumberjack show. We enjoyed as much Dungeness  Crab as we could eat, at 9:00 in the morning! Then it was over to the Lumberjack show, which was fun and exciting. Most people book these "excursions" through the cruise line. Connie found the exact same Crab Feast and Lumberjack show online, but for $160 less than what the cruise line was asking. Our last stop was in Victoria, Canada for a few hours. All in all, it was a very relaxing and fun week. But cruising and seeing a few ports in Alaska doesn't beat seeing Alaska at a slower pace from the mainland.

You can view the entire Photo Gallery of our 2019 Alaska Cruise here. We're here in Seattle for another couple of days, then it's time to start moving east.

Photo Show of Our First 2 Weeks in Canada