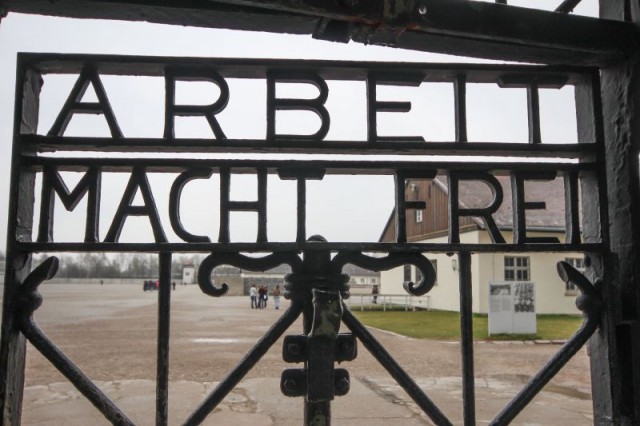 We moved about an hour away to the small town of Hochspeyer. Along the way, we detoured to the US Military Base in Sembach. We were stationed here from 1983-1986 when it was operated by the USAF. Since then, they've turned half of the base over to the community and it's now an industrial area. The other half is now operated by the US Army. We were curious to what it looked like now. It looks much the same, but it brought back some fond memories.

Along the way, we detoured to the small town of Enkenback-Alsenborn. This is where we lived for those three years. We wanted to see our old house. Wow! This entire area has grown in the past 35 years! There's been plenty of new development. We forgot to get a photo of our old house, which we just rented the top floor of. Our youngest daughter was born in Germany. The owners lived in the bottom floor and operated a piano shop. The piano shop is now gone and has been turned into another apartment. We were surprised how over grown most of the village was.

We stopped for the night in a "Wohnmobile Stellplatz" in Hochspeyer. This was a small parking area with optional electric, water, and dump station near the town's public swimming pool. Here, it was €5 for the night ($6.00 US). Electric was only €.50 (60 cents) for a few hours. However, the people that stayed before us left enough money on the meter that we got 5 hours of electricity for free. While here, we walked into town and did some needed grocery shopping and had a wonderful chicken lunch. 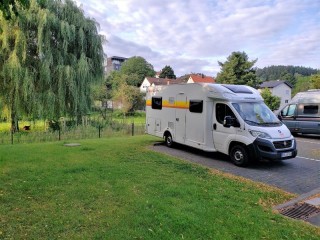 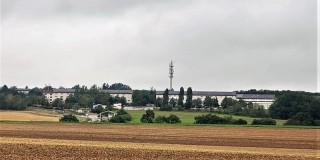 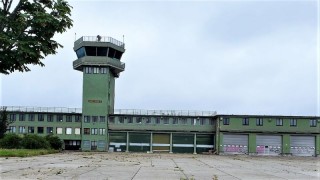 Today was a bit of driving. We drove for about 4 hours to Sulzemoos, near Munich. There was a motorhome dealer here that we've seen videos of and decided we wanted to visit them. "Der Freistaat", The Free State Caravanning & More is one of the largest caravanning trading centers in Europe. They also provide free camping for up to 3 nights. Of course, electric and water costs. However, again we got free electric for several hours from the previous occupants leaving money (time) on the meter.

When buying electric via these meters, it's usually for a kilowatt. Depending on how much your electric demand is determines how long it will run. We really only need electricity to charge the computer. Everything else is charged by USB from the motorhome batteries. The motorhome batteries are charged while driving and will last a couple days. 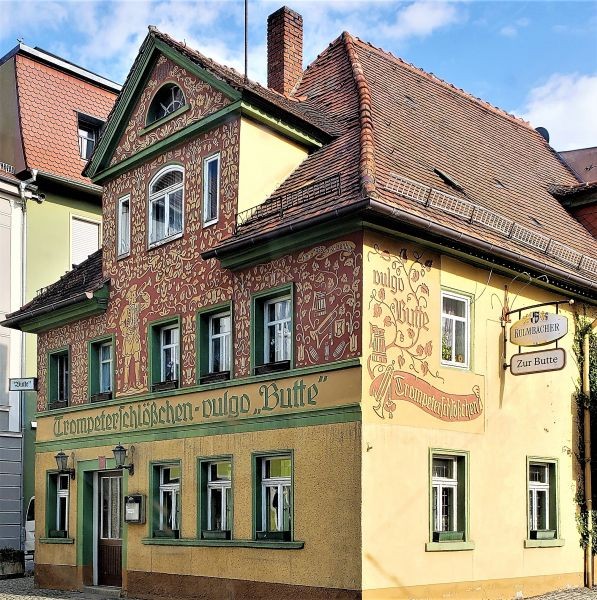 A Shop in Eisenberg 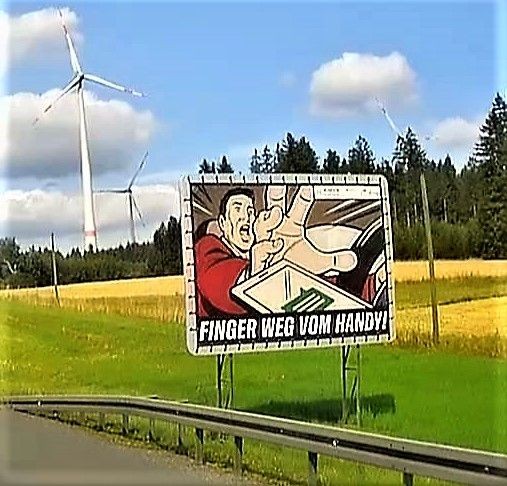 Entertaining Hwy Sign - "Fingers away from the mobile phone" 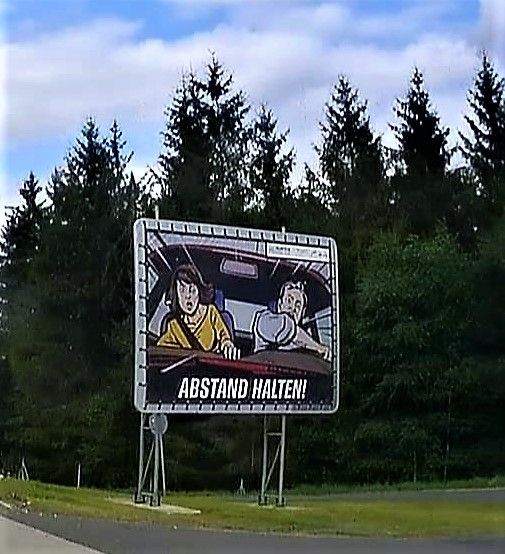 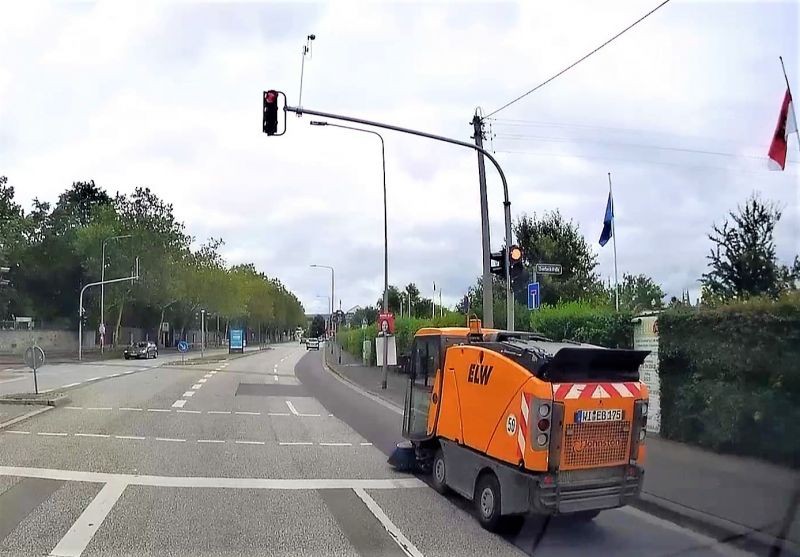 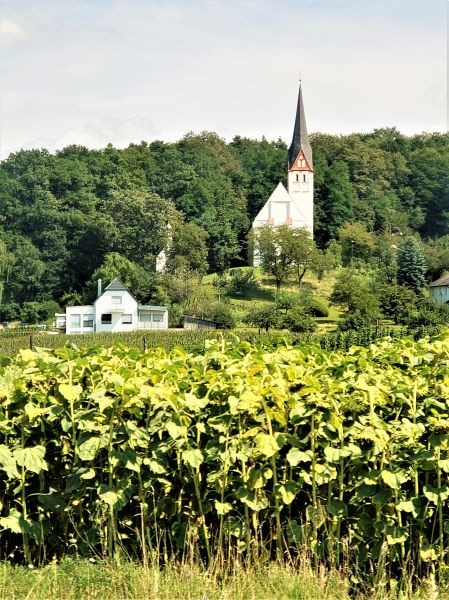 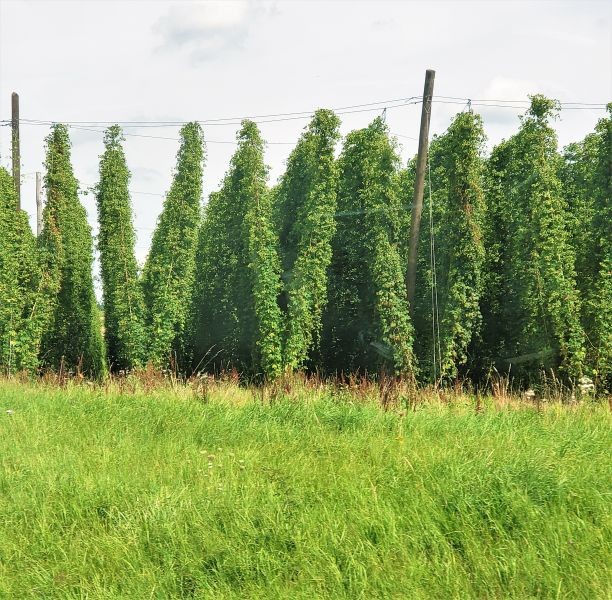 Der Freistaat also has a "mega store" of RV'ing supplies. It's like a Camping World store on steroids. We stopped in and purchased our much needed water hose, a couple plastic wine glasses (all we had before were coffee mugs), and some toilet chemicals. We had a great schnitzel lunch, then spent a couple hours looking over new motorhomes and vans. Besides our rental, this was the first time we had a chance to look at other European motorhome floorplans and manufacturers.

Today, we got an early start, as we went to Dachau. From Wikipedia: "Dachau (/ˈdɑːxaʊ/)[3] was a Nazi concentration camp opened on 22 March 1933, which was initially intended to hold political prisoners. It is located on the grounds of an abandoned munitions factory northeast of the medieval town of Dachau, about 16 km (10 mi) northwest of Munich in the state of Bavaria, in southern Germany."

Entrance is free, but there was a €5 ($6.00 US) parking fee for the motorhome. It was interesting to view the grounds and learn more of it's history. But it was also sobering to know what happened in this location. The previous concentration camp is now the Dachau Memorial. Not much of the original structures remain, but a few have been rebuilt. The memorial and museum explain in detail the history of the camp. Over 40,000 prisoners died here during it's 12 years of operation. Compared to other concentration camps, this is a fairly low number. Dachau wasn't primarily a Jewish camp. The informational signs are also in English, giving details of the camp. We spent a few hours here, then had a quick lunch in the motorhome before heading off again. 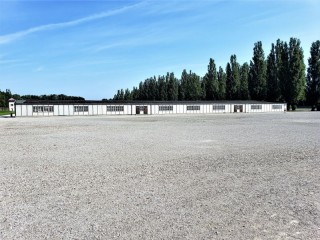 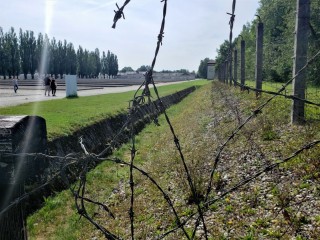 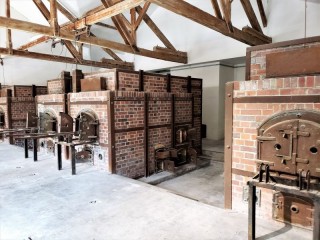 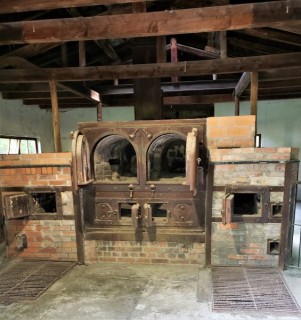 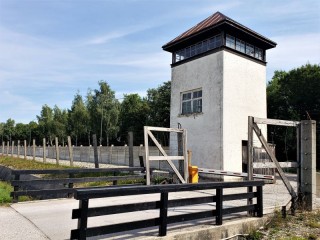 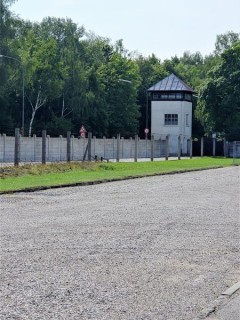 Around noon, we started the long 5 hour trip North. Google maps said it would be about 3 1/2 hours, but traffic and construction slowed us down. While slowed or stopped in traffic, we were able to enjoy the countryside. We went from the French vineyards (Champagne) to the German beeryards (Beer). We noticed that the farming areas around Nurnberg were large Hops fields. Germans do love their beer! We stopped for the night in another small town called Eisenberg. This is located in the former "East Germany". €5 ($6.00 US) for the night, and €1 ($1.20 US) for a kilowatt of electricity. But again, we got 900watts of electricity already paid for. This is just a stopover on our way to Berlin.

With all of the driving days lately, we decided to spend an extra day relaxing here. We're catching up on computer work and doing some reading. We forgot it was Sunday and all of the shops and stores are closed. Tomorrow - more driving with a Berlin campground as our destination. We've already booked a 3-day bus and cruise tickets.