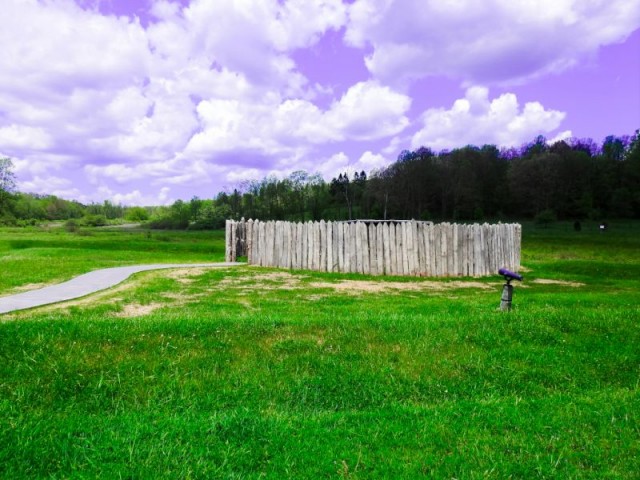 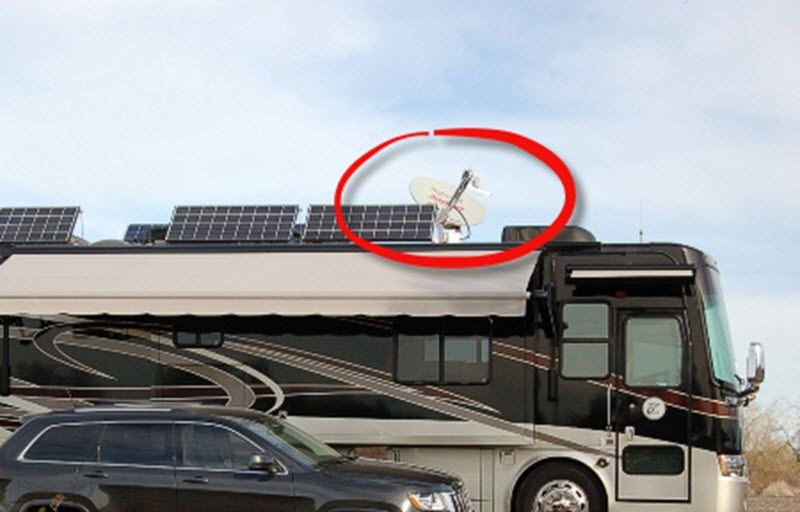 When May 22nd arrived, the Pennsylvania State Parks opened to camping. We had a 14-day reservation at Ohiopyle State Park, located in the southwestern part of the state. After leaving the little campground in Virginia, we were surprised the GPS took us through West Virginia into Maryland, and finally into Pennsylvania. We didn't mind the four-state drive in a day, we were just surprised. We didn't really look at the route ahead of time, just trusting our GPS.

We were glad we got the reservations for the state park, as it was Memorial Day weekend. After being isolated for a couple months AND it being a long holiday weekend, we knew they would be busy. We only made our reservations a few days in advance. 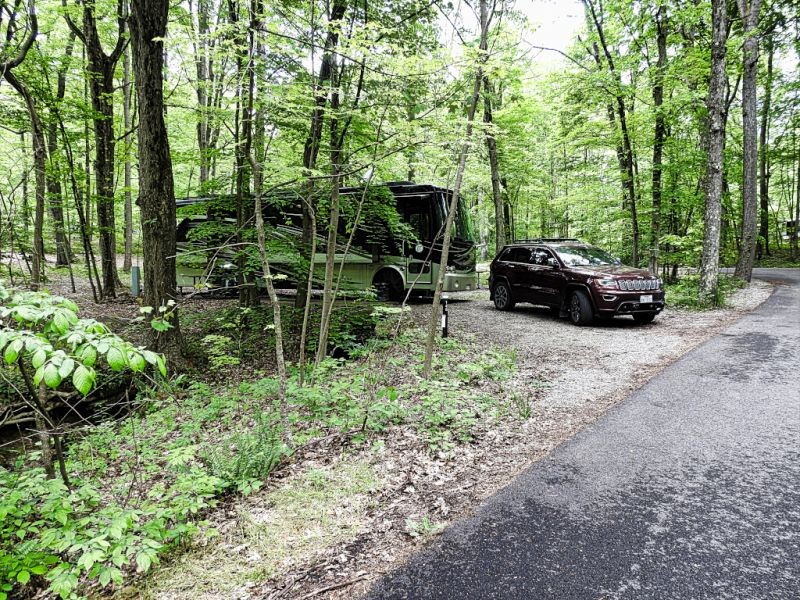 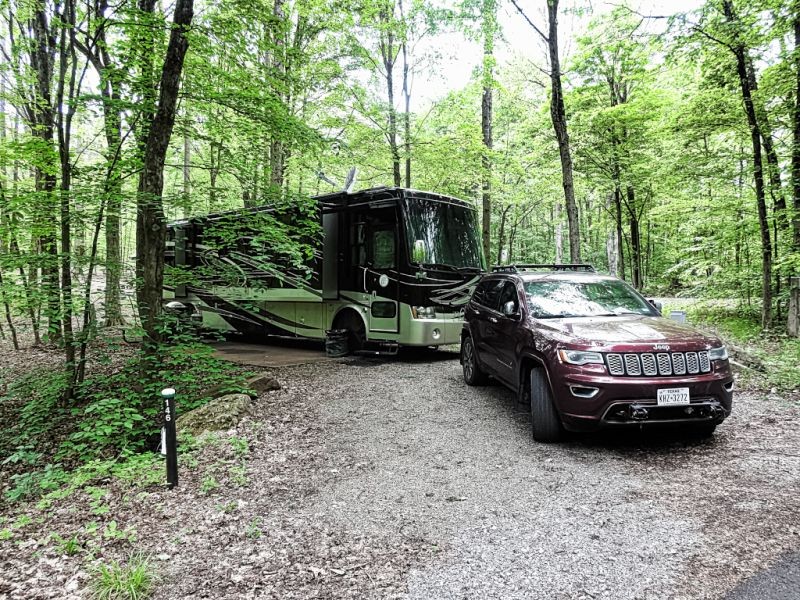 Our site was perfect! We had 30amp electricity. It was a large and level site. Surprisingly, our satellite dish was able to immediately find a "hole" in the trees to get television AND Internet access. We've had our "MotoSat" automatic satellite dish for almost 16 years. It's out-dated technology, but still works great. This is a three-foot dish on the roof, primarily to get HughesNet satellite Internet access. Originally, it was "DirecWay" Internet, but they were bought out by HughesNet. We keep the satellite Internet as a back-up system to our Verizon Mobile Internet.

When we find ourselves in a more remote location, Verizon doesn't work. As long as we have a clear view of the southwestern sky, we can still get Internet (and TV) through our dish. It's not real fast, but it's not real slow either. It's equivalent to having 3G cell phone service. There's a second receiver on the dish to get DirecTV television. The two satellites are two degrees apart. When the automated system finds our Internet satellite at 99°, we also automatically get standard definition TV from the DirectTV satellite at 101°. 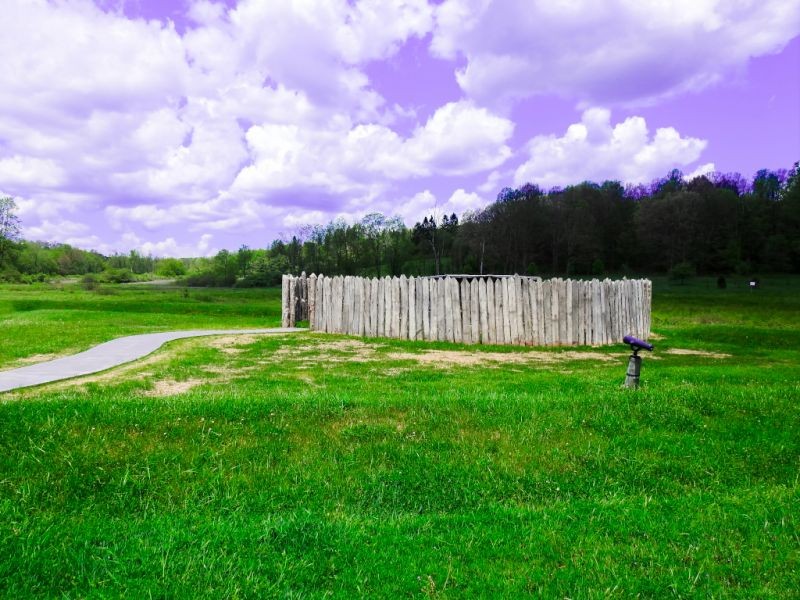 There's not a great deal to site see around the Ohiopyle State Park. There's a couple Frank Lloyd Wright homes in the area to view, but they are currently closed. Instead, we visited the historic and scenic spots.

We enjoy visiting historical locations. I like to imagine what life was like in the various times in history. I also take pleasure knowing I was standing in the same spot as some famous event or person in history. This time, we stood in and visited the same area where George Washington surrendered to the French. Yes, I didn't know it either. It's the only time that George Washington surrendered.

In 1754, George was 21 years old and a Lieutenant Colonel in the Virginia Militia. In May, 1754, Lt. Col. Washington had his first major event in his military career. It was also the opening battle of the war fought between England and France for control of the North America continent. After a small encounter with the French, Lt. Col. Washington was promoted to Colonel after the death of his commander in the fight. Col. Washington feared a major attack by "considerable forces", he undertook to fortify his position. Within 5 days, his men had built a circular palisaded fort, which he called Fort Necessity. 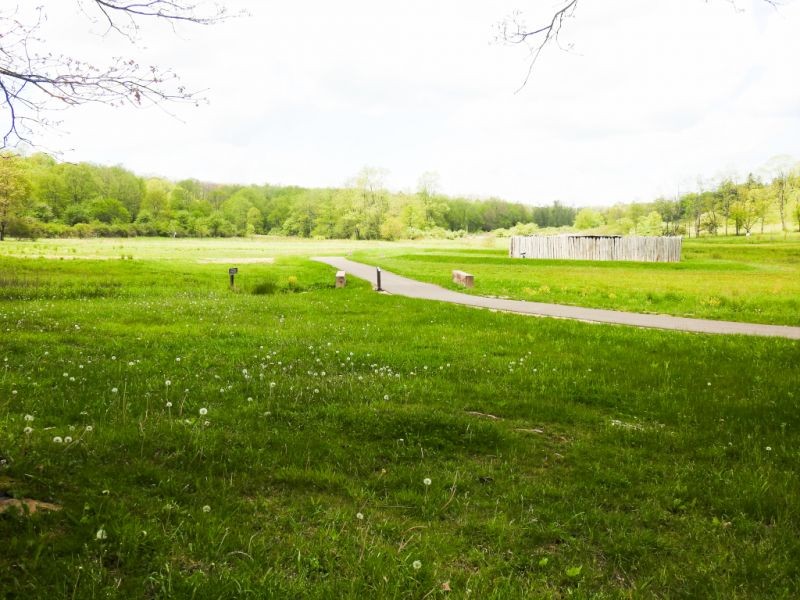 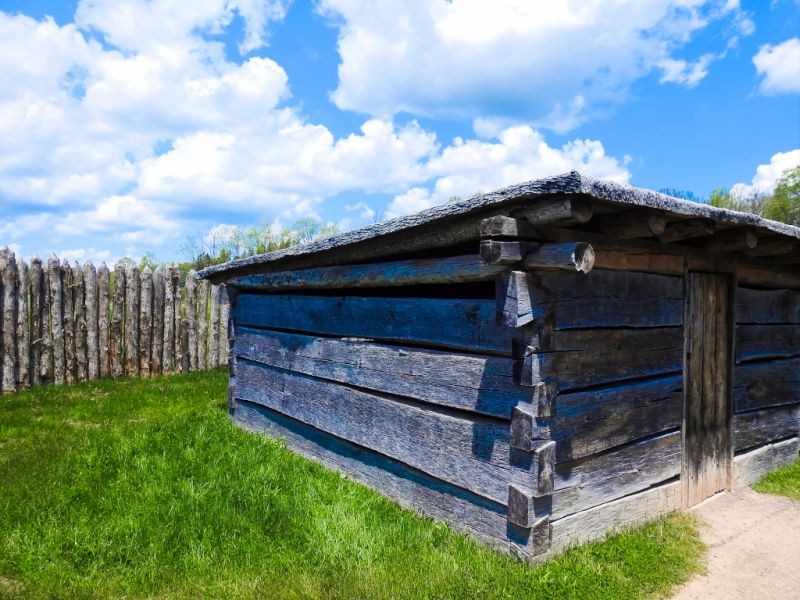 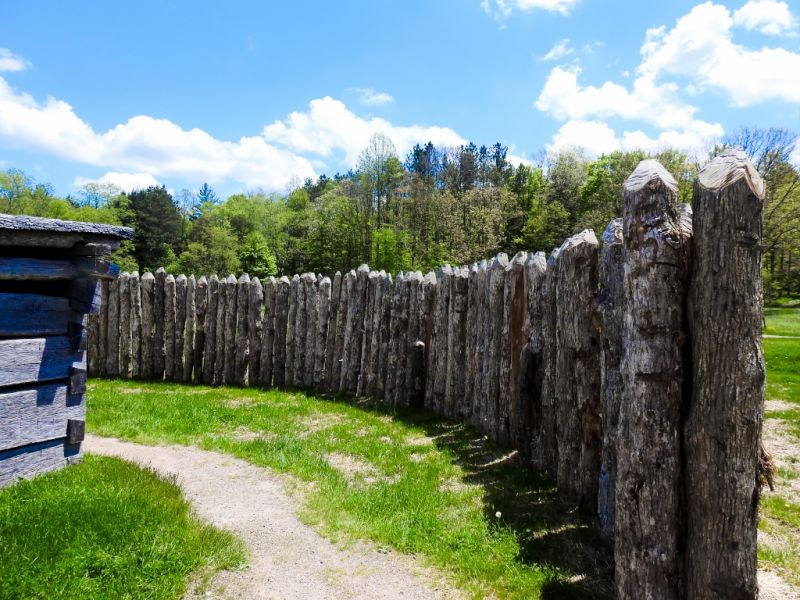 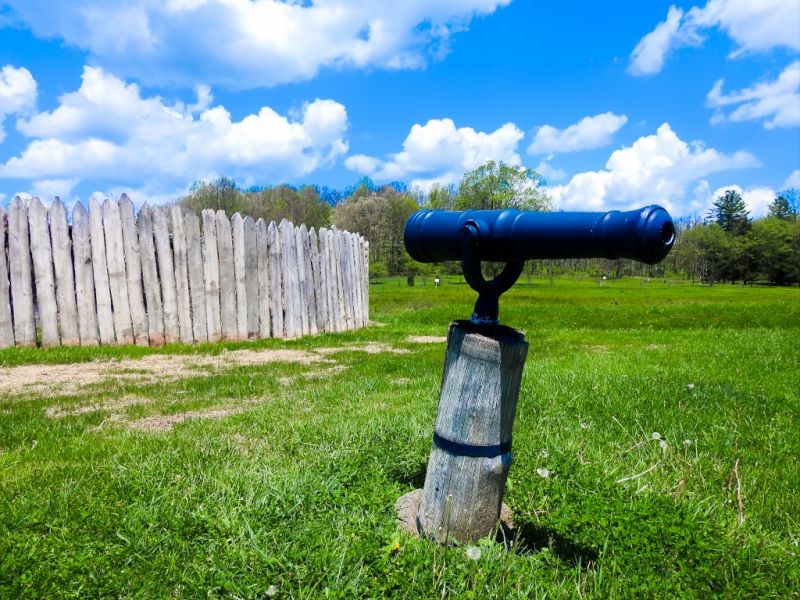 Eventually, on July 3rd the French did arrive and attack Fort Necessity. There were 600 French with 100 Indians. Col. Washington's command now totaled 393 officers and men. After over an 8-hour battle, both sides suffered casualties, but British losses were greater. The French requested a truce to discuss surrender. Washington eventually agreed to the surrender terms . The British were allowed to withdraw with the honors of war, retaining their baggage and weapons, but having to surrender their  swivel guns. On July 4th, the British left Fort Necessity and marched back to Virginia. The French burned Fort Necessity.

Today, the U.S. National Park Service maintains the Fort Necessity Battlefield. A replica of the Fort has been built in the original location, surrounded by the original trenches dug by Col. Washington's men. The visitors center/museum was closed during our visit, but we were able to walk the grounds and visited the replicate fort. We stood on the same grounds as our fist president, even if he did surrender to the French here. 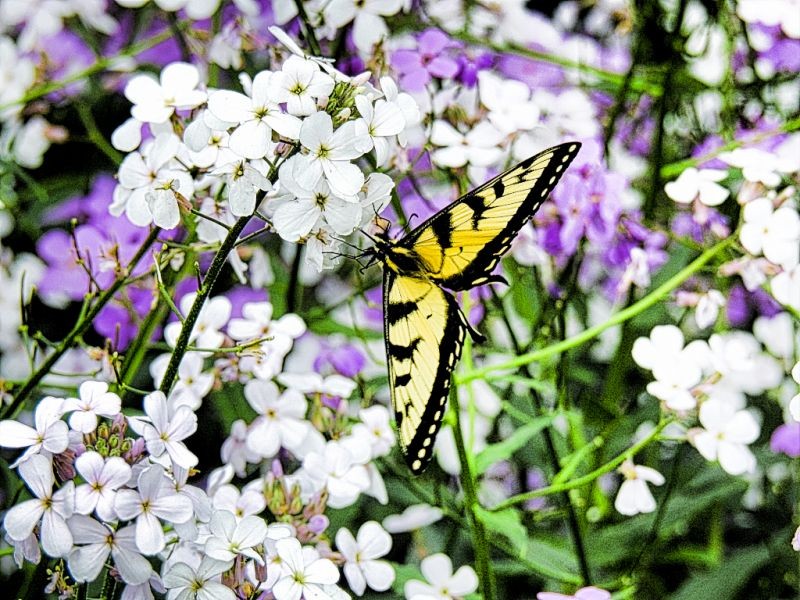 Our other day outings have been to see the local waterfalls in Ohiopyle State Park. We originally made the mistake of not paying attention to what day it was and attempted to go out on Memorial Day Monday. Wow! The streets were crowded with people fighting for parking spots. We turned around and went home.

Of course, the weekdays were MUCH better with almost nobody around. We were able to get parking spots close to the trailheads. 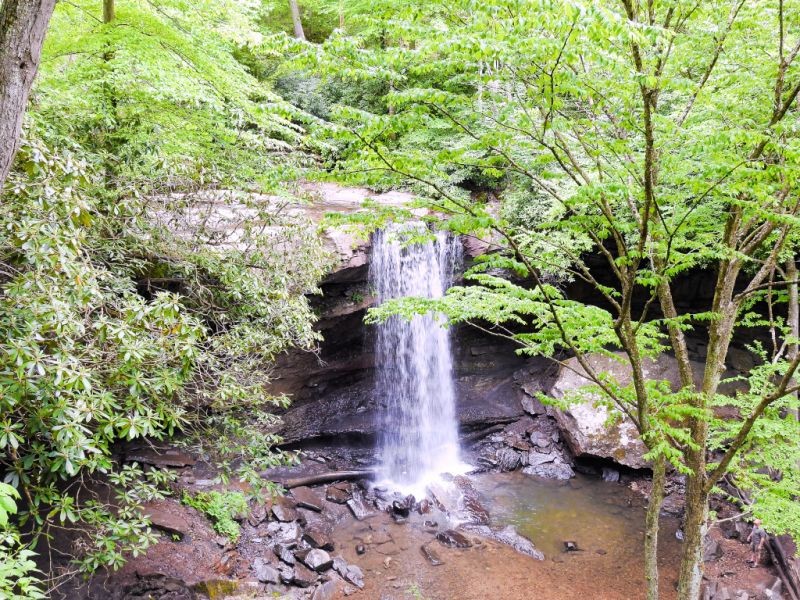 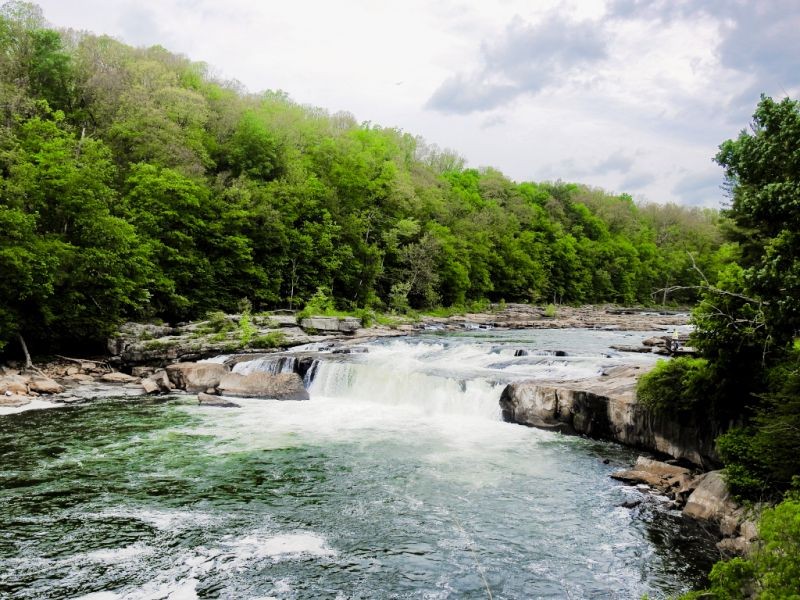 Our first outing was to visit the Ohiopyle Falls on the Youghiogheny River. Nice river and nice falls, but nothing spectacular here. However, it was interesting to note that George Washington rafted on this river to the falls. He decided not to attempt going over the falls. Smart man.

We also visited the Cucumber Falls on a smaller stream feeding into the river. These falls were more interesting. We visited on a cooler, overcast day. The trail goes down to the base of the falls. I really wanted to go stand underneath them, but it was cold and I didn't have a suit with me. I can see why this is a busy and crowded location on the weekends. 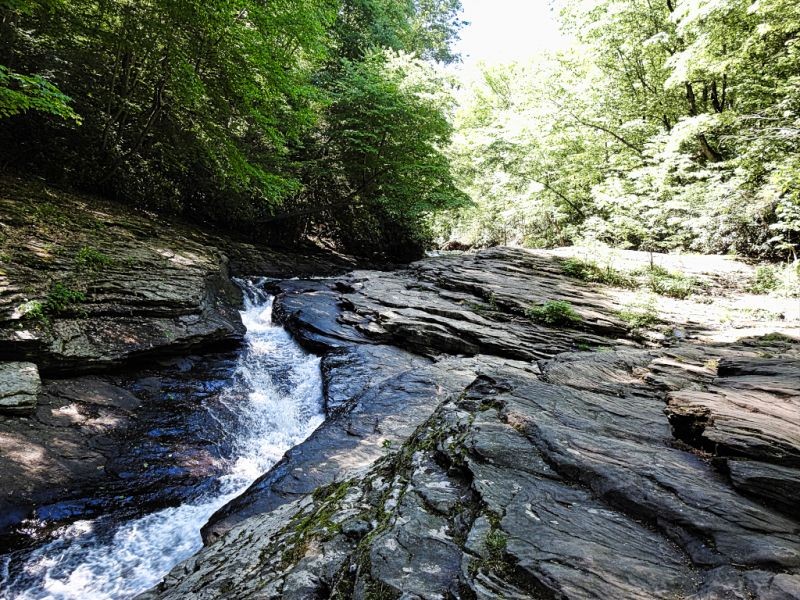 Nearby on another small river were the Natural Water Slides. I could also see this long water slide shoot being a very popular location on warm summer days. However, my tailbone hurt just looking at the slides. Perhaps they go down the slides with an inner-tube under their butt?

The rest of our time has been spent enjoying the peace and quiet of our park (even the weekends aren't noisy). Shopping and laundry are good excuses to get out. Reading, television, game playing, and working on the Internet is how we spend the rest of our time.

We leave here in a few days, heading to the Gifford Pinchot State Park, about 4 hours away (also in Pennsylvania). We've got another 14-day maximum reservation there. These PA state parks aren't priced too bad. We get a site with electricity for about $27 a night (senior rates).

Thanks for taking me along on the trip through history. I'm a history buff myself. Also appreciated the overview of the park especially since we'll be in PA probably sometime in the summer of 2021. Take care, safe journeys as you move on.

0 Cancel Reply
Thanks for taking me along on the trip through history. I'm a history buff myself. Also appreciated the overview of the park especially since we'll be in PA probably sometime in the summer of 2021. Take care, safe journeys as you move on.
Cancel Update Comment