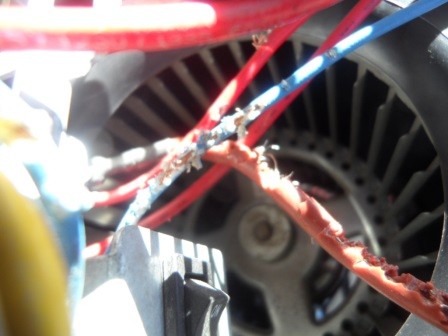 The other day, our rear gas furnace stopped working after a few minutes. The next time we used it, I realized it wasn't putting out any heat. During our days off, I thought I'd better take a look at it, before it gets real cold here. (BTW - the heater is a Suburban F35)

Taking this heater out of the motor home involves removing a side body panel to access the heater. Then I need to remove the 5 heater duct vents (I previously learned they just need to be turned to "unlock" the connection to the heater). After cutting some wires, I was able to pull the heater out. As we suspected, the heater had been ATTACKED BY A RODENT! About 6 wires were chewed up pretty bad.

I debated to replace the entire heater at $601, or try fixing the wires. After a little experimentation, I had better access to the wires. An hour later, I had spliced/patched together 6 wires. The heater was re-installed, and walla, the heater was working and putting out heat again. Now let's just hope the rodents stay away for the next couple of months. I'll make it a point to run it every morning to insure all is working well.