08/21/07: Huntington Lake, Sierra NF, CA: We elected to work this summer at Huntington Lake, CA, partly because it was near Yosemite and the Sequoia's. We visited Yosemite a couple months ago, and took the past couple days to visit the Sequoia National Park. It was another enjoyable "mini" vacation, with dining out and staying in a hotel. We deserve it! The Sequoia trees are HUGE! Although the park was full of tourists, it wasn't too bad in the middle of the week. We enjoyed a short hike through the Giant Forest where we could get away from the crowds and noise. While driving back to Morro Rock, we encountered 4 Black Bears. They didn't seem to care about the tourists snapping photos. One set of bears was a mother and her two cubs. Tourist were out of the cars and getting pretty close to the bears. We left the scene, as it was getting very close to someone getting hurt.

At work, the campgrounds have really slowed down during the weekdays. We still have a couple busy weekends left, then everything should (hopefully) really slow down after Labor Day. Many of our co-workers close their campgrounds in a couple weeks and will leave. We're lucky enough to stay until the very end and not leave until the end of October. But that's okay. Our savings account is growing and we have a free place to stay in a beautiful location. However, we're already talking about what we'll do and where to go when we leave here. We'll be heading back to Arizona again for this winter. We have many small repair items for the motor home, so will spend some time in Tucson getting everything repaired. We just don't know which route to take to get there.

08/13/07: Huntington Lake, Sierra NF, CA: WOW! I can't believe that time is slipping by us. I haven't been able to update this website as often as I'd like. Partly because we don't have Internet access at home. I may have already mentioned that trees block our Internet satellite dish. Luckily, Larry does have Internet access at the office. Of course, this isn't very convenient. Normally, I can sit at home watching TV and still work on the website. But the largest reason the website hasn't been recently updated is our busy website on Military Campgrounds was recently hacked. The intruder was able to cause enough problems that the website still isn't 100% operational. It's taking so long to restore that website because I don't have the free time (work is getting in the way), and the lack of Internet access at home. Getting that website operational has been priority #1. 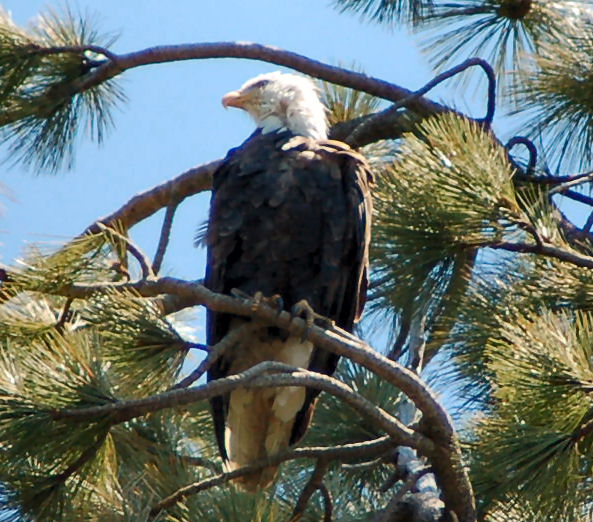 When we first arrived here 4 months ago, we were greeted by a Bald Eagle sitting on a rock in the lake. We've seen the Bald Eagles flying around many times and I've been wanting to get photos of them. We recently discovered their nest (it's a secret) and camper's told us where one of the Eagle's hangs out to go fishing. Many campers have seen the Eagle catch fish and fly directly over their heads with a fish in it's talons. I was finally able to get a photograph of the Bald Eagle on his tree perch. I wanted to get a photo of him catching fish, but he took off and I lost him. Perhaps when things slow down here I can get the photo.