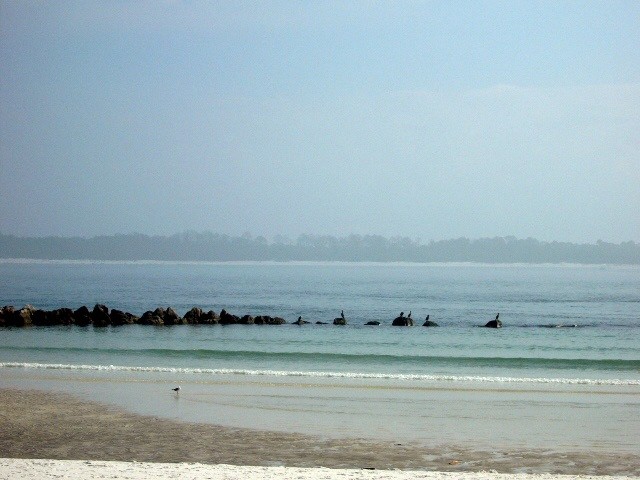 12/31/05: Panama City, FL: Happy New Year! I hope your past year has been as wonderful as ours. When we started traveling full time, we knew we would be moving slowly and enjoying life along the way. And move slowly, and enjoy life we did. In 2005, we drove the motorhome 9,280 miles visiting 22 different states. We parked our home in 36 different locations, spending from 1 night to 5 months in any one location. From our home, we've watched the sunset into the Pacific, and rise from the Atlantic. We've soaked in natural hot springs in the desert, toured the first Confederate White House, explored our Nation's Capitol, hiked the "Grand Canyon of the East", and visited numerous historic locations. From the large picture window in our living room, we've waken to magnificent views of the rugged desert, ocean front beaches, serene lakes, lush meadows, and majestic mountains. We met dozens of old friends on the road and made a hundred new ones. Life has been great for us as we continue to see ALL of America the Beautiful. 2006 promises to be even better.

12/29/05: Mary Esther, FL: Looks like we might loose our second baby! Cynthia, our youngest daughter let us know last night that her boyfriend Nick, proposed. They've known each other for over 5 years. No date set, yet. But we have a wedding to look forward too! Congratulations Cindy and Nick!

Yesterday, we were both terminated from Hickory Farms. This brought back the mental image of Mel Gibson in the movie "Braveheart" yelling out "FREEDOM!" The last week was pretty busy and I worried we would run out of stock before we made our seasonal sales goal. Part of our bonus would be based on meeting and exceeding this goal. I'd be pretty upset if we missed goal because Hickory Farms didn't send us enough stock. Well.. they sent me not one delivery, but two - just days before Christmas. We had PLENTY of gift packs and sausages to sell. And sell we did. We sold almost $20,000 of product in the last week alone! We ended our season with a big bang. After Christmas, everything went on clearance for 50% discount. We still sold another $5,000 of stuff.

Besides our hourly pay, we also got overtime. Although we were told Connie wouldn't be authorized overtime, she ended up getting a bunch. Between the two of us, we worked 724 hours since November 9th. Larry got 3 days off (including Thanksgiving and Christmas) and Connie 7. So our salary was decent. Although we haven't been paid our bonuses yet, we had the potential to get up to $650 in bonuses (only the manager gets a bonus). We ended up exceeding our seasonal sales goal. There's a $250 bonus if we were over 104% of our sales goal. We were 112%. Being below budget on employee costs is another $100 bonus. We were almost $1000 below budget. We had a special sales goal to sell 3 more bags of candy per day than last year, which would be another $100 bonus. We ended up selling 265 bags more than our goal, which is about 7 bags per day more than last year. Another $100 bonus is given for loss prevention. We had to have the cash register not exceed a variation of $100 and keep our inventory loss within .7%. Our register was only over by $8.64, but I'm not sure about inventory loss. Inventory was kind of messed up from the beginning. So we may not get this bonus. A new bonus was announced the week before Christmas. If we we exceeded that specific week's sales goal, it was another $100 bonus. We exceed that last week by over $4,000.

On top of bonuses, there were various sales contests. Although we tried hard to meet many weekly contests, we always came very close. These contests we as simple as selling 186 sausages in a week to win $10 for each employee. We sold 182 that week! Finally, we did win the last week's contest selling gift cards. So all employees should get $10 for that. Hickory Farms was also collecting phone numbers from customers and had contests. The top 25 stores in the nation to collect the highest percentage of phone numbers based on transactions would win $50 for the store for that week. There were 6 weeks of this contest, and our kiosk was in the top 25 each of these 6 weeks. So that was $300 to be divided among all employees. It worked out that Connie and I won $90 each, and our two employees got $60 each. In addition, there was a phone number contest for the season. The top store in the nation would win $100 for each employee. We missed winning this top position by .025%. So our second place prize was $75 for each employee. Yes - we ended up the season with a bang. If we get all bonuses as promised, we'll get at least $900 between the two of us, maybe $1000.

We've been asked if we would do this again next year. Maybe. We'll look for other work, but will still consider Hickory Farms next season. But I'll be smarter and be sure our pay is better suited. I may have mentioned that friends of ours made over $3 an hour more than we did. I felt we got taken advantage of. But there's a ton of seasonal jobs available. We could stop in any town and easily get work for the holiday season. We also have a few other ideas we're investigating for the next holidays.

We GREATLY enjoyed our first day of total freedom today. A little relaxing, playing cards, and some shopping. We even had a home cooked dinner together! We leave tomorrow for Panama City to bring in the New Year. Then we head for Tallahassee for some work to be done on the motorhome. Afterwards, we start our southern journey towards The Everglades and Key West. We plan to stop and see many friends along the way. I also bought a wireless web camera today. So our RVCam shouldn't be so boring in the near future. We can place it almost anywhere near the motorhome. My next project is to develop a way to keep it weather tight outside. We're looking forward to the future and am glad we can get our adventure back on track.

12/21/05: Mary Esther, FL:<What can I say? It's been long, tiring days of w**king. But the end is in sight! Many people have expressed interest in the financial aspect of working for Hickory Farms. Basically, has it been worth it? When the job is over, we'll be in a better position to determine if it was. I'll explain our compensation and summarize our working for Hickory Farms later. Then we can move onto more fun stuff, like traveling and seeing our wonderful nation.

12/13/05: Mary Esther, FL: I feel bad that I haven't been keeping this log current. But the fact is, life has been pretty routine (boring) here. All of our efforts are geared toward managing and working the Hickory Farms kiosk for the season. As I've written before, employee issues have been terrible! Just last week, I spent quite a bit of time with a prospective employee to insure there would be no problems with her. She assured me she would be dedicated and would stay until the end of the year. Yep! She worked 3 nights, then came in 10 minutes late to work, just to tell us she couldn't work that night. Connie wanted to fire her on the spot, but we need the help. So I gave her a chance. But the following night, she came in and quit. With only 2 weeks left, we're not going to bother hiring any new employees. Connie and I will be putting in many hours, but we're not going to worry about the overtime. Let's get a much pay as we can in the remaining 15 days.

>But we do have some GREAT NEWS! The Navy campground in Key West is open again! So our original plans to spend a couple weeks in the Keys is back on track. When we leave here in a couple weeks, we'll take two weeks heading down the west coast of Florida. Our daughter and son-in-law will arrive January 18th to visit for a week. They recently were SCUBA certified and want to dive in the Keys. We're looking forward to their visit and the fun we'll all have.

After December 28th, we'll be free to travel, explore, and have fun for about 6 months before our Summer workamper jobs at Mt. Rushmore, SD. We'll get these travel logs back into something worth reading again.

Life is pretty much the same here, but less than a month left with w**k! Did I tell you I'm looking forward to it ending? To help time go by quicker, and I saw a need for it, I've started another web site. This one is for the large population of military travelers. Although still being constructed, U.S. Military Campgrounds is a website that will provide information on military campgrounds in the U.S. I hope to keep it current with the help of user updates. Currently, there's no place on the web to find all of this information in one place that is current and up to date.