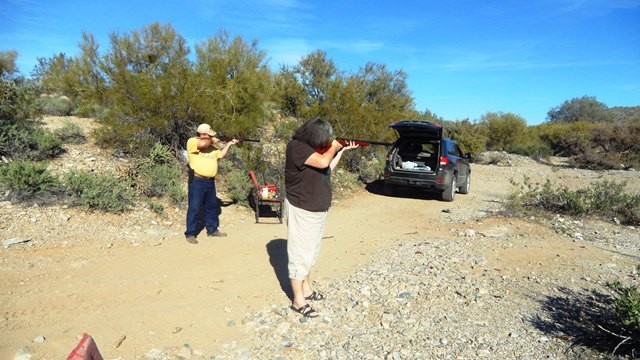 July 28, 2012 - Inyo National Forest, CA: I know it's been over 8 months since anything has been updated on this website. With the popularity of Facebook, I haven't seen much need to try and keep this website current. Connie is regularly on Facebook with family and friends. While we still get a few visitors to this website, it's only a trickle of guests. However, although much of the information is getting old, there's still good information available here. I know when we were researching about traveling full time, any information was helpful.

I'll go ahead and try to catch you up on what we've been doing. During the winter of 2011-2012, we hung out around Arizona and Southern California. We spent a couple months in San Tan Valley, near our youngest daughter. During this time, we got caught-up on medical appointments. Other than seeing Cynthia and Connie's Grandmother in Casa Grande, these were a couple of boring months! If it wasn't for the annual medical appointments, I won't do that again!

In mid-January, we headed out to Quartzsite, AZ again to spend a few weeks with Escapee Boomer friends. This is an annual "rally" held the last two weeks in January. We also met many other friends, as many RV'ers migrate to Quartzsite during this time. We also "work" in the large RV Show tent, helping to recruit camp hosts for CLM Services, which is the company we've been working for each summer for the past 6 years. Larry also attended the quarterly management meeting at this time. We enjoy the beauty, serenity, and friendships we have while in Quartzsite. There's LOTS of activities going on. This year, Connie danced/exercised with "Zumba" in the desert. She's set a goal to lose weight in 2012. (As of this morning, she's lost over 50 pounds in the past 7 months).

After Quartzsite, we started to "roam" Southern California. When we bought our new Phaeton motor home in early 2010, a "free" membership to Thousand Trails RV Parks came with it. This gives us 2 weeks of a free RV full hook-up site at one of their many RV Parks in the west. We can stay 2 weeks free, leave a week, then spend another 2 weeks at the same, or another RV Park. A pretty good deal, IF we use it. We do need to pay about $600 a year in "maintenance" fees. So we attempted to use these RV Parks as much as we could. However, we waited too long to make reservations and had some problems. After leaving Quartzsite in early February, we spent a little over a week in Palm Springs at a Thousand Trails park. No charge. But we got a terrible RV site near the freeway. We then spent a couple weeks at an Escapee RV Club park, called Jojoba Hills. At Quartzsite, freinds gave us a coupon for 50% off for a week. At about $8 a night, it was a good deal. We then stayed another week. This is a very nice membership RV Park, and we had lots of Boomer friends who have a RV lot there. We enjoyed visiting the Temecula, CA area again.

After our two weeks at Jojoba Hills, we headed to another Thousand Trails RV Park north of Temecula. We really liked this park, as it was quiet and fully equipped. While enjoying our free FHU site, we met with friends that we work with. We found out some lived nearby, and others were staying with relatives near by. We also met with more Boomer friends, who recently bought a condominium in the area. While here, we broke down and bought some bicycles.

After our 2 week stay here, we headed to the Seal Beach Navy Base. They have a wonderful campground there, only open to the military. We spent a week there, while visiting Connie's parents and brother. While I like this RV Park and visiting family, I don't like being in the Los Angeles traffic, noise, pollution, etc.

One of the "perks" of being an Operations Manager, is the use of a company vehicle. Larry's car was being stored at Lake Isabella for the winter. That was out next stop. We planned to spend a few days there, visiting the area, getting the car, and visiting with Larry's boss. However.... it was EXTREMELY windy. There was so much wind, that "billowed" out the awning over a slide-out (topper). The awning wouldn't retract. Here we are, with an awning billowed out and blowing in the wind. Upon further investigation, and trying not to get blown away, we saw that the "roller" appeared bent. Climbing on the roof of the motor home, Larry gave the awning roller a good slap, which straightened it out and the awning rolled up. Whew! Then it snowed that night. Luckily, the snow melted fairly quickly. While staying at Lake Isabella, we also went and visited some of Connie's relatives that she hasn't seen in over 30 - 40 years. We ended up only spending two nights at Lake Isabella (free at a company managed campground). We wanted to get out of that wind storm!

Next stop was a couple hundred miles further north in the town of Bishop, CA. This was only about 45 miles from where we would be working the summer, but at a much lower elevation. The weather was much warmer in Bishop. We stayed at a commercial RV Park for a week or so. During this time, we made trips to where we'd be working to check things out and determine the snow conditions. SInce the campground where we would be staying still had a few feet of snow (and this was a very light winter), we moved into Oh Ridge Campground. We turned on the electric and had the water turned on. There were the usual broken water pipes that needed to be repaired. Some of the staff started arriving and the new season had started. After a couple weeks at Oh Ridge Campground, the snow had melted and we were able to move into our summer RV site at Old Shady Rest Campground.

That brings us up to our movements so far this year. We're GREATLY enjoying working in the Inyo National Forest. While it's similiar to what we've been doing, it's also different in many ways. At least living is more comfortable for us. We have a FHU site, Internet access, and phone coverage. Shopping is less than a mile away. But we still have the same employee, camper, and maintenance issues. This location is MUCH busier than the area we had in the Tahoe National Forest. But it hasn't been all work for us either.

Once the campgrounds were all open and all staff had arrived and was trained, we've been trying to insure we get our 2 days off each week. While we usually end up doing some work, we've been trying to do some hiking and touring. This is a new area for us, so there's much to be seen and experienced. We visited the ancient "Bristlecone Pine Forest", with trees over 2,000 years old and still living. We greatly enjoyed the 7 mile hike. New friends we've made are Tim and Tracy Orteg. Tim's one of the area managers and Tracy is a camp host. They are a wonderful couple. Since we all have Mondays off from work, we've been doing some hiking together. Last month, we visited the old ghost town of Brodie. Well preserved and maintained, it's a large town from the 1800's. Another week, we all hiked around Horseshoe Lake, then up to McLeod Lake. A couple weeks ago, we made a 8 mile hike over Mammoth Pass, whcih took us into Reds Meadow. We then hiked to Rainbow Falls, then back to the Devils Postpile. We were pretty exhausted. But we planned it to take a shuttle bus back up the mountain, catch another shuttle, switch shuttles again, and end up back at the car at Horseshoe Lake. My legs hurt for a week! But it was a wonderful hike!

Last week, Connie and I drove to the Mazanar National Historic Site. This is the location of a Japanese Internment Camp during World War II. While not much remains, there were a few reconstructed barracks and a good museum.

It's been a very busy camping season here. Currently, we're in the middle of the season. But within another month, the kids will be back in school and camping will greatly slow down. We'll close some campgrounds in 6 weeks, while others will stay open until early November. While many of the employees are getting tired, it's a challenge to keep them motivated and productive. Many have learned that being a Camp Host is WORK. It's not just a matter of sitting around and talking to the campers.

Connie and I haven't really talked about what we'll do this winter. I think the plan will be similiar to last year. We'll return to Arizona for Christmas and the annual medical appointments. Then roam around Southern California again. However, I plan to make reservations for the Thousand Trails RV Parks early and visit more of them. We need to justify the annual $600 we spend on this program. I figure if we can get at least 30 nights out of the program, I'm a little ahead financially. If we didn't work in the summer, we would enjoy this program all year long. We have talked about cancelling our membership.