January 25, 2010 - Ortona South Locks, Corps of Engineer, FL: These past couple of months have gone by pretty quick. In December, we rushed from Alabama to Florida to see about purchasing a new motor home. You can read about that experience and decision here. We ordered the Tiffin Phaeton and had to wait for it to be built and delivered.

In mid December, our daughter Cynthia (and friend Melanie) flew in from Arizona to spend a week with us at Disney 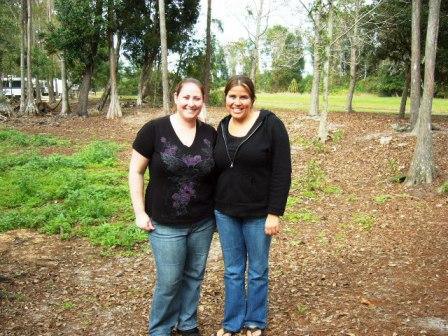 World. Since our Jeep doesn't have a back seat, we planned on renting a car. But wait! We figured it would be more cost effective to camp at Disney Worlds "Fort Wilderness" campground and NOT rent another car. This would save on renting a car (which would sit in the parking lot most of the time), and save on the daily parking fees. In addition, Disney would provide a free shuttle for the girls to and frm the airport. So we stayed a week at "Fort Wilderness"! It worked out very well, as the girls could have their own schedule to visit the various Disney parks, without relying on us for transportation. The campground was $66 a night, except the last night being $99. WOW! That's the most we've ever paid (and want to pay) for a campground. But this was the weekend before Christmas. Speaking of Christmas, MANY of the RV's in the campground decorated MORE than I've seen regular houses decorated. TONS of lights, animation, and blow-up decorations all over the place. We all had a great time that week. Connie and I really enjoyed spending time with Cindy and Melanie. Friends Bob and Joyce Childre, who live in central Florida, also came down to Fort Wilderness for a few days. We spent the days with them visiting the various Disney parks, while the girls went off at their own pace.

We called the Tiffin motorhome factory to see when our new Phaeton would be scheduled to be built. It was scheduled for December 14th. We would liked to have gone and watch it being built. but we spent the week at Disney World instead. We could have gone to Alabama afterwards, but the new motorhome would be in the paint shop by then. Watching paint dry didn't sound too exciting. Instead, we headed east to Melbourne, FL to stay at Patrick AFB for a few weeks while we waited for delivery of the new coach.

Patrick AFB provides support for NASA at the Kennedy Space Center and for Cape Canaveral. We visited the Kennedy Space Center a few years ago. On this trip, we took a day tour of Cape Canaveral while staying at Patrick AFB. It was interesting to see many of our historic launch sites. We enjoyed Christmas and New Years at Patrick AFB. In early January, the weather turned extremely cold. The cold caused hundreds of Puffer Fish to die and they started washing ashore. Sea turtles were also being effected by the cold and were going into some type of shock. The campground rescued 37 sea turtles in one week. Luckily, all of them survived with help of the local sea turtle rehabilition center. Yes, they do have these. We visited one on our last visit to Florida. (Read more here).

We had learned that our new motorhome was completed and being delivered to our dealer on January 9th. They needed a few days to clean her up and we scheduled to take delivery on January 14th. Since this was also around the same time that the "World Famous" Tampa RV Show was going on, we decided to visit the show for a day, then pickup our new home. We talked Lazy Days (our dealer) into letting us come in on the 13th. This gave us a place to stay while we went to the show. The RV show was "okay", but not as good as I had expected or hoped. There were plenty of new RV's to drool over, but we already had our new one coming the next day. We wanted to see more vendors than they had. Luckily, we had gotten a couple free tickets to the show, so we got what we paid for.

The day of accepting our new home finally arrived. Actually, we were lucky to ony have to wait a month for the motorhome to be built and delivered. The delivery day was a bit stressful, and exciting. We had an Internet Dish dealer come out and remove our old satellite dish from the old Dolphin motorhome. I had already purchased a used, newer model, but didn't want to leave this valuable piece of equipment on the old rig. However, the dish dealer only gave me $150 in services for it. We found out later he sold our old dish for $1000. I had kept telling the dish dealer I was being "ripped off" on my old dish, but he didn't seem to care. More on this topic later.

Back to deliver of our new Tiffin Phaeton motorhome. We had a walk though of the new coach, found a few small things wrong, with most of those items being corrected immediately. We eventually paid for the new coach and started to move "stuff" from the old Dolphin to the new Phaeton. This was MUCH more work and stress than I had anticipated. Connie kept complaining (and crying) that our "stuff" wouldn't fit in the new coach, although it's much larger. We eventually got everything moved over. It'll just take a little time to re-organize and find the best way to store items. We were trying to store everything the same way it was, which isn't going to work. Everything is okay now, and storage will only improve as we get better organized. There is more storage, we just need to learn how to better utilize this space. after we were moved over, I removed my 4 solar panels from the old rig and installed them on the new rig (not yet connected). I also didn't want to leave my 6 new AGM batteries in the old rig, so I moved them into the new Phaeton. I ended up giving away the 6 new flooded acid batteries that came in the Phaeton. I didn't need them and wasn't about to carry them around with us. Luckily, Lazy Days wasn't rushing us to leave. We spent 4 nights in a "delivery" site moving into the new Phaeton. We were treated pretty nice. With the purchase of our Phaeton, Lazy Days gave us a membership into their "Crown Club". This is special treatment for the more expensive rigs. We get free meals (nice, sit-down service) and free social hours (free drinks). They also give Crown Club members special treatment on many other things. The food was real good and we began to realy appreciate this special service. It was nice not having to fix meals, dine out, or do dishes while we were moving into our new home. Finally, on Sunday, January 17th, we drove off in our new home.

After leaving the Lazy Days RV Dealer, we headed to Tyndall AFB in Panama City, FL for a luncheon we were hosting for users of the U.S. Military Campgrounds and RV Parks website. We got a partial RV site with water and electric. This was our maiden voyage n the new Phaeton. WOW! It sure runs smooth and quiet. I guess I should tell you more about our new home:

We purchased a 2010 Tiffin Phaeton, 40' QTH. This "diesel pusher" motor home is almost 41' long, has 4 slide-outs, a Cummins 360 ISC engine, with air brakes and air bag suspension. Its larger, more slides, more power, and a better ride than our previous Dolphin. With the powerful diesel engine in the rear, we ride in almost complete silence. No loud engine noise like before. The braking is much stronger, and the ride is much smoother. Since we can't hear the engine, we joke that we're coasting all the time. But the fuel gage shows differently. We're also getting better fuel mileage. So far, we've averaged 8.5mpg in the Phaeton. About 6.7mpg was our average in the gas Dolphin.

After only a few days at Tyndall AFB, we rushed back down to Southern Florida to have our Satellite Internet dish installed on the Phaeton. We stayed in the installers front yard, but had electric service. What was planned to be a one-night installation, turned out to be 3 nights. Earlier in the month, I had purchased a used MotoSat automated Internet dish, with controller and modem. All of these were newer models than what I previously had installed. I got a great price on this used equipment. However, there were some delays getting everything transferred over form the previous owner. Part fo the delay was the weekend. MotoSat doesn't work on the weekends, so we had to wait until Monday morning to finish it all up. For those "techies" out there, I am now using a MotoSat D3 controller with a HughesNet HN7000S satellite modem, assigned to the G11 (91W) satellite. So far, everything is working fine.

We left the Ft. Lauderdale area yesterday, heading towards Fort Myers. Friends Bill Joyce and Diane Melde are staying in this area. We hadn't seen them in a few years, so we planned for a visit. They upgraded their Dolphin 5 years ago to a 40' Newmar Dutch Star diesel pusher. As we often do, we didn't know exactly where we were going to stay for the night. Connie found us a FANTASTIC Corps of Engineers RV Park located at the Ortona South Locks on the Caloosahatchee River. We were lucky to get a non-reservable site for the next 5 nights. It's quiet here, the site includes water and electric, and we can watch the boats rising and lowering in the locks. It also doesn't hurt that the weather is pretty nice again.