03/23/08: Livingston, TX: Happy Easter! No problems getting our 7th day free at Fort Sam Houston. We then moved toward Livingston and stopped in Katy, TX for the night. The wind was blowing extremely hard and I was ready to get off the road. We spent one night at the Katy Elks lodge and had an electric hook-up. We then continued the next day in strong winds to Livingston. Connie wasn't feeling good and slept the entire trip. We've been settled here at the Escapee headquarters RV Park for almost a week. I'm sorry to say, as much as we hated the train in San Antonio, the highway noise here is worse! We got placed in a RV site along a highway with a 70mph speed limit. Cars, trucks, and motorcycles constantly road by. I'm getting eager to be at work on our quiet mountain. Speaking of, we have a little over 3 weeks to report for work.

We've spent our time here taking care of personal business, and working on a new RV related website. I'll announce it when it's ready. We've been having some toilet issues. When in San Antonio, the toilet wouldn't stop running water. We took the flushing mechanism apart, but the water still runs at times. Unfortunately, we didn't recently catch it. Connie got up from knitting on the couch and stepped into a pool of water. The toilet had been running for 5 - 10 minutes and overflowed. Half the motor home was flooded. We grabbed all of our towels and mopped up the mess. In a couple days, we'll start making our way back to Phoenix, then to Fresno for summer work. At least I'll get away from this noisy highway!

03/16/08: Fort Sam Houston Army Travel Camp, TX:After leaving New Mexico, we were heading to San Antonio to spend a week or so. As I've mentioned before, we don't like to travel more than a couple hundred miles at once. What's the rush? This time, we pushed it a bit and stopped in Fort Stockton for the night. Without reservations, we tried to get into three different RV Parks, but everything was full. We ended up spending the night in Wal-Mart's parking lot. This is only the second time in almost 4 years that we've stayed in a Wal-Mart parking lot. After an uneventful night, we drove another 200+ miles to Kerrville. After a couple days of hard driving (for us), I was ready to stop and relax. Luckily, the Elks club had space for us and we stayed a few days. 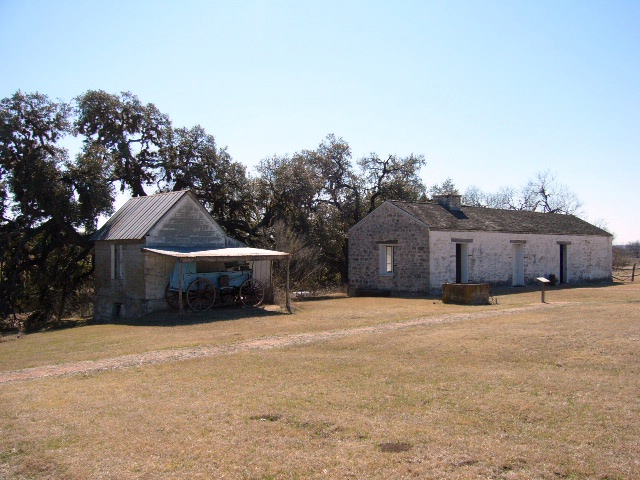 During our stay in Kerrville, we visited with friends Rob and Kim Johnson, who we worked with a few years ago. We also made a day trip to Fredericksburg. Our goal was to find some good German dining. While exploring the town, we discovered an old Frontier Army Post that had been slightly rebuilt. Fort Martin Scott was active from 1848 - 1853. The town owns the property now and has turned it into a small historical site. Self-guided walking tours are available at no charge. Despite the windy conditions, it was interesting to walk among the rebuilt fort. We would have stopped at the Pacific War museum, but the wind was pretty strong and we had enough of it. The highlight of this excursion was finding a fabulous German restaurant. We had a fantastic lunch at Friedhelm's Bavarian Inn.

One of the reason's we stopped in Kerrville was to relax and wait for our reservations at Fort Sam Houston Army Travel Camp in San Antonio. We rarely make reservations, but wanted to stay here. This park is always full this time of the year. We made the short 80 mile trip into San Antonio and have been here for 6 days now. We've caught up on business, visited with Rob and Kim Johnson again, visited and reviewed 5 military campgrounds in the area, and sought out more German food. Twice more we've had German meals, but nothing as good as we had in Fredericksburg. Yesterday, we made a day trip to Canyon Lake to review a couple military campgrounds there. Not too far from town, this is a wonderful local recreation area. We're supposed to leave today, but we're going to try and get a site for one more night. We'll have to change sites, but that's okay with us. I wish we had thought of this earlier. We've paid for 6 nights here, but a week is the same price. I need to convince the office to give us tonight free since we've already paid the week's price. We'll find out in an hour when the office opens. If they don't agree, we'll be moving towards Livingston a day early. Livingston, TX is our legal "domicile" and the HQ of the Escapee's RV Club.

03/01/08: White Sands Missile Range, NM: After spending 4 days in dry-camp at Davis-Monthan AFB, we rotated into a FHU site. 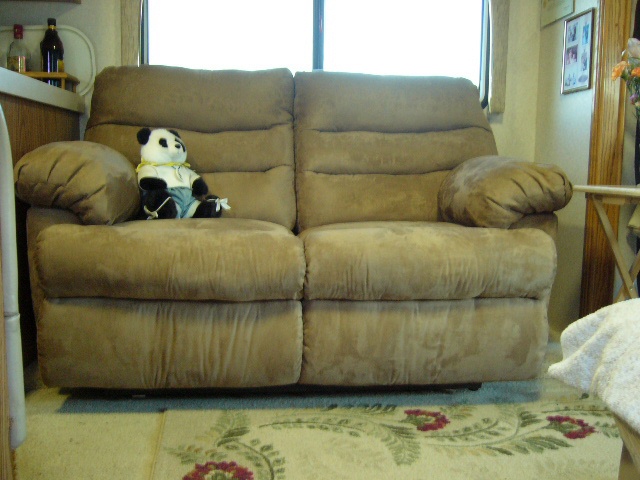 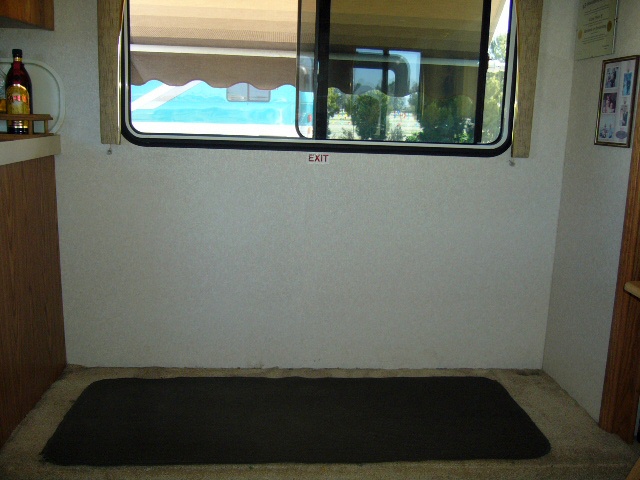 We stayed a couple more days there to catch up on laundry. Before we left town, we met with friends John and Nancy Grindley. They showed us a furniture store where we ended up purchasing a reclining love seat. It's larger than we expected, but very comfortable. Since we have a narrow slide out, the love seat extends beyond the slide. I bolted down a couple heavy strips of metal to support the seat, but the metal is just acting like a spring. I'll have to figure something else out to support the love seat. But it's useable. I'll probably wait until we're settled for the summer again before making any major modifications.

After leaving Tucson, we headed to Safford, AZ to visit friends Jim and Bonnie Douglass who we worked with a couple years ago. They just accepted a manager's position at an RV Park to allow time for Jim to recover from a recent heart attack. After visiting f 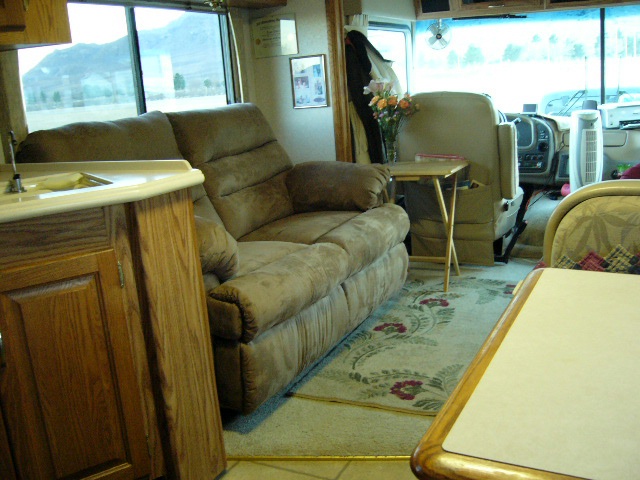 or a couple days, we headed to the White Sands Missile Range Army campground in New Mexico. We were pleasantly surprised at this quiet and peaceful campground. Originally planning to only stay a couple days, we've been here for 4 days and will leave tomorrow. The weather has been great.