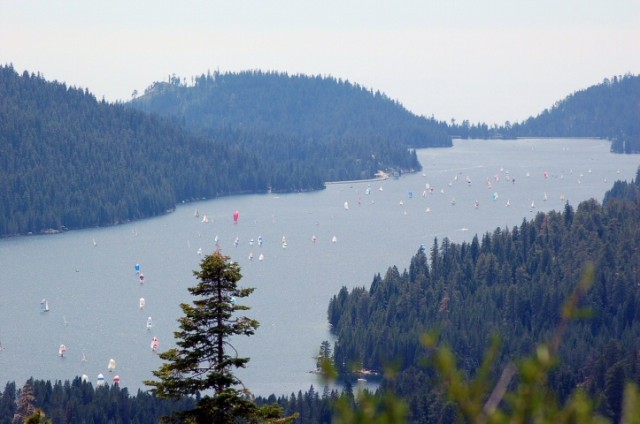 07/17/07: Huntington Lake, Sierra NF, CA: Time is starting to fly (slip) by now. We can't believe how fast these past two weeks 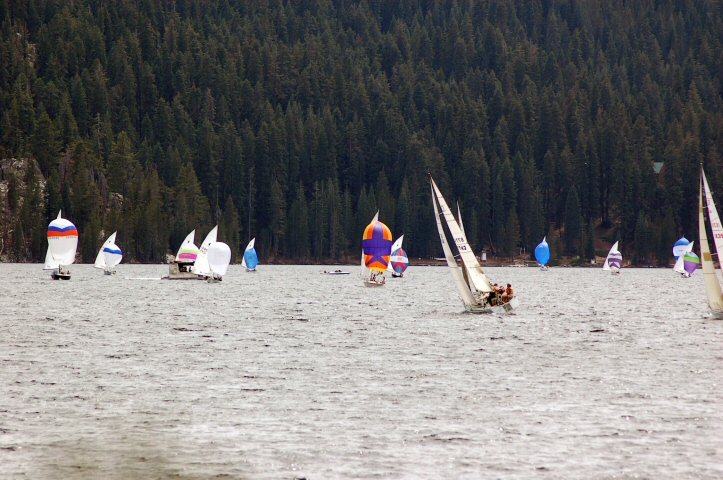 have gone. Perhaps this can be attributed to how busy we've started getting. Weekdays are still mellow, but the weekends are crazy! Our campgrounds have been almost 100% full on the weekends. Since we're also mainly "first come - first serve" on campsite selection, we're finding our busy weekends start on Thursdays. People come early to get the premium campsites near the lake. Huntington Lake is primarily a sailing lake. These past two weekends there were large sailing regattas on the lake. We had a lot of all sizes of sailing boats competing. We managed to slip away for a little while to catch a few photos.

When you get this many people partying on a lake, there's bound to be an accident. After a late night in the local "saloon", four men who worked at the Boy Scout camp across the lake were returning by boat to their camp. Two had life vests on, two didn't. In their condition, a fight broke out while on the boat. Fighting in a small 14' fishing boat on the lake at midnight resulted in a capsized boat. Frantic calls for "HELP!" were heard from the shore. A few good Samaritan's from shore headed out in their boats to provide assistance. Three of the men were rescued. The fourth man's body, not wearing a life vest, was recovered a couple days later. Here in our campground, we've had a few recent minor emergencies. A 75 year old man left to go hiking, but was over 6 hours late when we were asked to call for a search to start. Luckily, he returned to the campground 15 minutes later. He had gotten lost. We also had to call an ambulance last night for an 84 year old woman who tripped in her tent and seriously (broke?) her leg. Ah, the fun of being a campground host.

I've previously mentioned about our Bald Eagles around the campground. While we haven't sighted them lately, campers have. We've been shown a tree in our campground where a large Bald Eagle is regularly seen. Campers even captured a video of this Bald Eagle leaving his perch, swooping down over the lake, and snatching a trout from the lake. WOW! We live here and haven't seen this much yet! We're too busy out working and cleaning bathrooms, while the campers camping directly on the lake sit around and can enjoy the scenery more than we can. But we're keeping our eye out!

07/02/07: Huntington Lake, Sierra NF, CA: We're pretty much into a work routine now. We find we need to make the 120+ mile round-trip to Fresno every couple weeks. We get laundry and grocery shopping accomplished. We also enjoy a lunch out and get some other items we need. The days are going by fairly quickly. Financially, we're doing pretty good. So far, all paychecks have gone into savings. This is partly due to our low expenses. I've posted June's expenses in our Expense Report on the website. This is a fairly accurate record of our monthly expenses since starting to travel full time. Last month's expenses were slightly higher than May, due to our mini vacation to Yosemite, and the quarterly bill for Internet access.

We're also starting to see some of the rewards of being a camp host. It's a great feeling to receive compliments on how nice the campgrounds look, but the best is when we receive gifts. Some campers have provided us with plenty of fresh trout. One family cooked us a BBQ dinner, which was fantastic! They even gave Connie a potted flower and Larry some NASCAR hats and T-shirt. Scott is a crew member for Lynch Racing, Car 2, a NASCAR West team. Thanks Scott, Jana, Claire, and Emma!

Since today was the beginning of our 2 days off, we made the short hike to the Indian Pools nearby. This is located at around 7000' feet at the Sierra Summit. A gorgeous day, with a gentle 2 mile hike, to a gorgeous location. This is the perfect location for a picnic and dip in the cool natural creek pools. The Spring flowers are also starting to bloom. 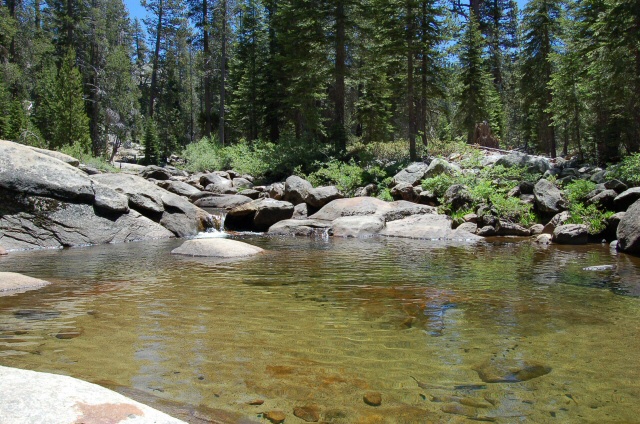 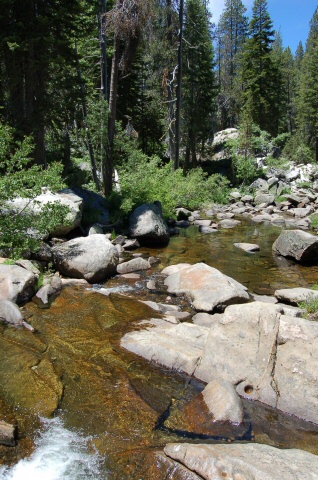