02/19/07: Torrance, CA: The brake parts arrived a few days ago and they got them installed the following morning. Come to find out that the right-rear brakes have NEVER WORKED! They were still brand new, except for some surface rust. For 5 years, we've been using only 3 brakes! They tried to repair the malfunctioning brake, but it seems to be in the ABS. There's no brake fluid at all getting to this brake. They replaced the rotors, calipers, and pads on these 3 brakes, for total of $3200, which included parts, priority shipping and 4 hours labor. I think Barstow Towing did a fantastic job, was reasonably priced, and was very hospital letting us stay in their lot.

Now the job is to find a Ford truck chassis dealer and get the 4th (new) brake working. Although it's not under warranty anymore, I plan to argue with them. How were we supposed to know this brake has never worked? If we had gotten in an accident involving fatalities, I bet they'd listen with the lawsuit they would have. We also need to get at least one tire replaced, as the flat we got on the road can't be repaired. This is turning out to be an expensive repair year!

We're currently visiting with Connie's family. In this suburb of Los Angeles, we're lucky to find an Elks club near her parent's home that has electric/water hookups. Otherwise, there's no RV parks around for miles. I'm ready to leave this traffic and noise. Give me the open spaces again.

02/14/07: Barstow Towing, CA: Happy Valentines Day! We made it out of Death Valley, barely. The motorhome brakes were sounding terrible! We didn't tow the Jeep to reduce the stress on the brakes and hoped we would make it the 180 miles safely to Barstow. But I wasn't thinking. We left Death Valley on Saturday, and not many repair shops would be open. So we stopped at the Barstow Marine Corps Logistics Base to wait out the weekend. Early Monday morning, we found a place that could work on them AND get us in immediately. With everyone else, we would need to wait a few days before they could look at us. Although it's a large towing operation, Barstow Towing also works on large vehicles.

Although a bit worried, we made it to the shop okay. But the brakes were screaming at me and brake fluid was pouring out of one wheel. They looked at the brakes and the damage was as bad as I expected. Bottom line, the rotors were all shot with deep trenches. The brakes were deep metal on metal by now. We've ordered all the parts and am paying extra to priority ship them in. They were kind enough to let us stay in their back lot and even had electric and water hook-ups for us. We've been waiting 2 days for the parts now, and am hoping they arrive by Friday morning. I'm told brakes should last about 75,000 miles. They think something was wrong to begin with, since mine went so bad in only 31,000 miles. The hill we had problems on wasn't that bad, and we didn't have any pre-warning of problems. Oh yea... the estimate for replacement brakes and labor is at $3500!

Connie suggested we stay away from places with "bad" names in them. Brake problems at DEATH valley and a flat tire and small fender bender at the "BADLANDS". Perhaps we're only meant to be around good places.

02/09/07: Death Valley, CA: We left the Phoenix area a few days ago. We stopped for the night in Quartzsite, AZ and visited Jim and Ruth Roberts, who we worked with a couple years ago in Lake George, NY. We then headed to Las Vegas to spend the night, but was delayed for a little while. Our little Doran tire pressure monitor worked again! While cruising along at 60mph, the alarm sounded. I saw that a motorhome tire was down to 74psi, and a few seconds later, it was 68psi, and was continuing down! We pulled over to check the tire, and sure enough, we had a flat! We weren't too far from Henderson, NV and our Coach-Net road service came through again. I LOVE that service. I highly recommend them, and any road service is a MUST for this lifestyle. Within an hour of calling for service, we were on the road again. It sure is nice having someone come out and change these large tires, for free (well, there is an annual premium for the road service).

We made it through the terrible Las Vegas traffic and spent the night in Indian Springs, NV behind a small casino. They had the greatest $3.99 steak and eggs breakfast. We were heading to Death Valley, and I decided to go through Beatty, NV on our way. Between Beatty to Death Valley is a 13 mile steep downhill. By the time we reached the bottom, my brakes were smoking and didn't work well. It was difficult stopping at the stop sign. And I tried not to ride the brakes down the hill. I'm hoping I have brakes when we leave, but they'll still need to be looked at. So now, I need a tire fixed or replaced and the brakes checked.

We're currently staying at Stove Pipe Wells campground in Death Valley. We toured a bit yesterday afternoon after arriving. Some of the colors of the hills is fantastic. No wonder they call it "Artist Point". We also visited an old Borax processing plant. The source for Borax is from the nearby dry lake. Remember the "20 mule team" for Borax? They processed the Borax here and transported it by 20 mule team's 165 miles to the nearest railroad. Actually, it was 18 mules and 2 horses. We saw the remains of the processing equipment for the Borax, as it was cheaper to process it here than transport the raw rocks. There was also an old wagon from the mule team, which was eventually replaced by a steam tractor (and wagons), which was eventually replaced by nearby railroads. We plan to do some more touring today, and may stay a 3rd day for even more touring. Death Valley is HUGE!

02/04/07: Usery Park, Mesa, AZ:It's been another relaxing week. We LOVE it here at Usery Park Recreation Area, AZ. This is a county 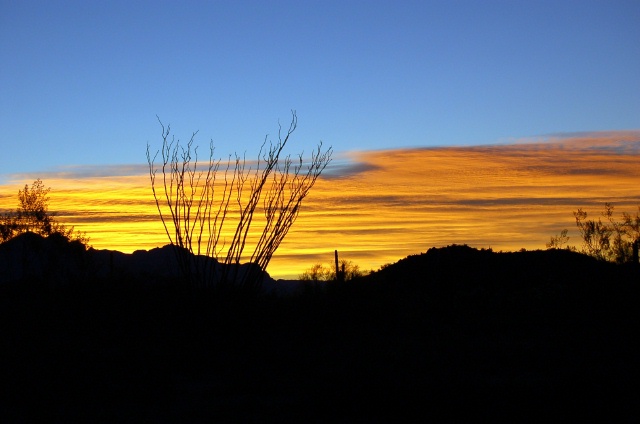 park. The price is a little high, at $18/nt. This gives us an RV site with electric and water, and use of the dump. But 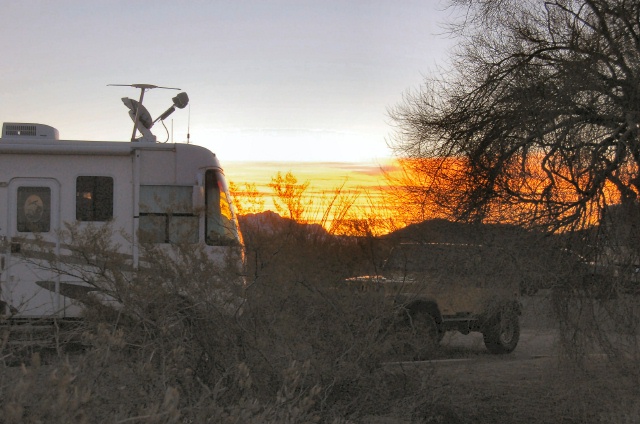 the views are outstanding and wildlife is all around. Check out the sunrise. We've seen coyote's about 4 times so far. It's only a few bucks more than the local commercial RV park, and they were full.

We've spent the week visiting our daughters and their families, including "the" grand baby. Connie's out visiting her grandmother now, who is 92 years old! I've been learning more about web design, using a Content Management System. If interested, take a look at www.MilitaryCampgrounds.us . But I've been playing with another site, learning new techniques. I've been doing some other computer/programming work - more on that later. Since Connie's got a doctor appointment 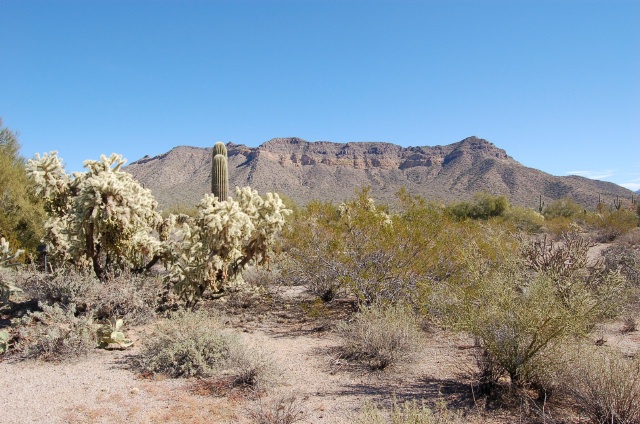 tomorrow, we'll wait and leave on Tuesday. We're heading to Lake Havasu for a night or two, then on to Death Valley, CA. We plan to be in Torrance, CA, to visit Connie's parents by February 14th. Geez! That only gives us 8 days to travel the 390 miles. I've got to be careful on rushing us!