7/31/06: Keystone, SD: Well, we've survived a month here! All of a sudden yesterday, life got more entertaining here. a dozen or more hummingbirds suddenly appeared and are putting on a show for us. Actually, they're fighting for possession of the few hummingbird feeders out. We've had one large one out since we've been here, and they still haven't found it (yet). But the neighbors had a couple and all of sudden these little hummers are all over the place. We put up another small feeder this morning and it took 3 minutes for them to find it. As I type, there's 5 hummingbirds 5' from our window fighting for the right to slurp up the sweet juice.

At work, everyone is getting excited and ready for the yearly Sturgis motorcycle rally. Tens of thousands of motorcycles start showing up soon. Even though Sturgis is an hour away, many of the bikers come here to visit Mt. Rushmore. Hotel prices TRIPLE in a few days for the week!

7/27/06: Keystone, SD: Time is starting to slip past us. We're pretty tired every day and don't go anywhere. But we have been enjoying many "social hours" with our fellow workampers. At least three times a week we get together under someone's awning and just visit. Visiting with new friends is something Connie and I enjoy. One of the attractions on our "to visit" list was an area advertised as "The Cosmos Mystery Area". Connie wanted to see what it was all about, so we did. As expected, another tourist business. You may have visited these weird buildings where water flows uphill, or you stand at an extreme angle. I visited one at Knott's Berry Farm in California many, many years ago. Although they state it's a mysterious vortex of gravity, it's all based on an optical illusion. This cabin is built on a an extremely steep hillside, then the cabin itself is also built an extreme angle. But once you're inside, everything appears normal, except you can't stand straight up. Water rolls up hill, balls roll up hill, an 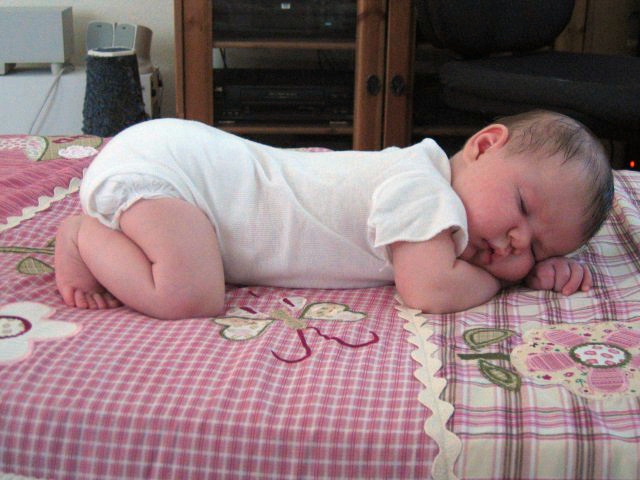 d other illusions (demonstrations) are shown. Some people were getting dizzy and motion sick just standing there. 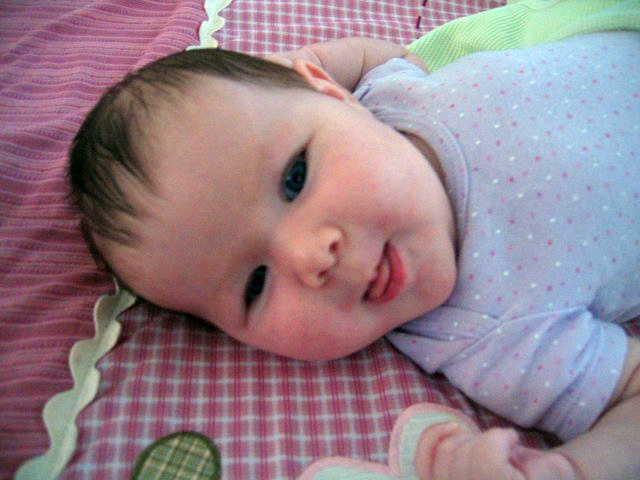 It was another interesting outing that we wouldn't have paid for.

We're missing seeing Kaylee, our new granddaughter. But Leslie has been good at sending us new photos every week. Got to love digital photos and e-mail!

7/21/06: Keystone, SD: We received our first pay check! Our finances for this year haven't been too great. We've spent more than we'd like, so it's nice to see a positive for the month. The income is needed and sitting still and keeping busy with work has greatly reduced our expenses.

The town we work in, Keystone, is a very small tourist town. There's no grocery stores, fast food, or medical facilities. We need to drive 20 miles to Rapid City for shopping or other services. The other day, we had a little time to kill on our way into town. We stopped and used our free pass to play in "The Maze". A large wooden maze that was fun, but took longer than we expected. 55 minutes later, we had completed the maze and were hot and tired. This was another small tourist attraction we never would have paid for. But it was fun. The employee pass we've received here for free tourist attractions is a great benefit.

7/16/06: Keystone, SD: Nothing eventful happening with work. That's just what it is.... work. Although not hard work, just a tad frustrating and tiring to stand for most of the eight hour shift. But the past few days have been days off! Since they are getting our work schedules stable, we have 4 days off in a row. We thought about visiting Connie's brother in Montana, since we had plenty of time, but it wasn't possible with short notice. We'll try to see him later, but we'll only have a couple days to make the 680 mile round-trip. I'm not looking forward to driving 6-7 hours, have dinner and spend the night, then drive 6-7 hours back and start work again the next morning.

So instead of making a trip to Montana, we're seeing many of the local sites. After working here for two weeks, we finally got to see Mt. Rushmore close up. I promise, this will be the last photos I post of Mt. Rushmore. After looking around and hiking the 1/2 mile trail, we continued on to the Crazy Horse Monument being constructed. When we last visited this area, about 25 years ago, Crazy Horse wasn't much to see. But much has been done in the past 25 years. We were a little surprised that they stopped working on it again. They're trying to get additional funds before continuing. It'll probably be another 40+ years before it's completed (if ever). Mt. Rushmore was technically never finished, according to Gutzon Borglum's plans. We stopped for lunch in the town of Custer and had a plain tasting meal. Then continued on to the "National Museum of Woodcarving". Not something we would normally visit, but it was on our free pass. It was the life's work of one artist. Good woodcarving's, with many of them being animated.

Early this morning, Connie woke me up and said "let's go drive the Wildlife Loop at Custer State Park". We just returned, and it was a pleasant morning drive. We did see much wildlife. Besides all of the usual birds, we saw squirrel, rabbit, turkey, deer, bison, mountain goat, and a coyote. We've never seen so much wild turkey and deer before. This included a couple bucks, and a doe with a nursing fawn, as well as wild turkey with about 20 chicks tagging along. Although, we didn't see as much Bison as we expected. Only about 20, but they also had calves. On the return trip back, we took the Needles Highway. A small, curvy road that goes through a few VERY narrow tunnels carved from the mountain. Less than 10' wide narrow!

7/12/06: Keystone, SD: We're starting to get back into a work routine. We have SO MUCH to see in this area, we're wondering if 4 months is going to be enough time. It looks like our work schedule will involve 2 mornings at the Travelodge hotel, and 3 closing shifts at the Rushmore Express and Suites hotel. We MUCH prefer working at the Express, even if we don't get home until almost midnight. It's a nicer hotel and has a better working environment. The 3pm - 11pm shift also lets us get up when we want, and still have time to do some local exploring. We plan to take great advantage of our free perks.

One of these perks was a free show and meal at the "Pitchfork Fondue". The meal is a 10oz steak cooked on a pitchfork, deep-fried in a fondue of peanut oil. It was pretty good and tender. The show was on a patriotic theme with a musical family - The Fiddlers Three. Although nothing spectacular, these brothers and sisters are real talented. The youngest, 14 years old, plays the fiddle and banjo real good, as do they all. The sister is a wiz on the fiddle. The second oldest brother plays the guitar, but also MADE the fiddles used by the group. Not sure if I'd want to pay $25 each for it, but this is a tourist town and everything is a bit expensive.

Yesterday morning, before our 3:00pm work time, we visited the nearby Reptile Gardens. I joked with Connie that tourist come to Mt. Rushmore to visit a reptile garden. But they do. We watched the snake show and the alligator/crocodile show. Both were good. I especially liked the aggressive Cobra snake. I'm sure everyone was glad he was caged up, because it sure wanted to bite everything that came close to him. They also had an 18' crocodile, named Maniac. Wow! This guy was HUGE!

7/7/06: Keystone, SD: The Independence Day potluck went off very well. After dinner, we watched the spectacular fireworks show from our patio. I tried to get some photos, but they didn't come out well. We're starting to get back into the routine of work (ugh!). We're learning our job very quickly, as it's not difficult. The computer reservation program they use here is real simple. They even installed a second computer, so we're a little more efficient now. It looks like Connie and I will be mainly working the closing shift, from 3:00pm to 11:00pm. It's not that bad. At least we don't have to set an alarm clock too often.

Today was our first day off. After a quick trip into Rapid City, which is 20 miles away, we planned to finally get up to the Mt. Rushmore Monument. We see "the boys" everyday, but haven't been up close to say "Hi" yet. After a nice sunny morning, we get up to the monument and a thunderstorm rolled it. We paid our $8 for the annual parking pass, took a couple photos, then immediately left. Maybe the weather will be better tomorrow. It's only a 2 mile drive. Sometimes, one of the benefits of workamping in the tourist industry is getting free, or reduced rates on many of the local tourist attractions. Guests ask us all the time to recommend a place to visit, or eat. If we have first-hand knowledge, it's easier to explain and recommend something. Last year, in Lake George NY, we had about a half a dozen places we got to visit free. But here, the Black Hills 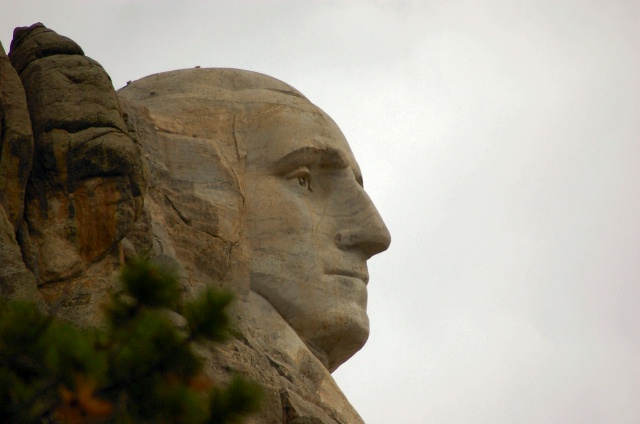 tourist association is well organized. We each received a pass that is good at well over 48 different tourist attractions. Most are free, with some of the dinner shows being half price. Connie highlighted the activities she wants us to visit. This list will keep us busy almost every day off. And most of it is free! Since it was raining and we left the National Monument, we returned to Keystone and took a (free) tour of the Borglum Historical Center. Gutzon Borglum is the artist who designed and lead the construction of the Mt. Rushmore Monument. This was an informative museum/tour and we learned much about the artist. We'll now have a little different perspective when we do get close to the monument.

7/2/06: Keystone, SD: Well, we completed our first day of work here. It doesn't seem that it will be hard to pick up on the job. Our first impression is confusion. We both work the front counter of an 85 room hotel, and it seems it could be better organized at the counter. I'm sure we'll slowly make our little changes for a smoother operation. But we don't want to come in "bossy" either. Our supervisor is a real nice 25 year old lady. She's doing a real good job for her experience, and the support she receives. We know we can live within their rules and style of operation. As we joke with each other, we're just the slave labor and will be leaving in a few (fast) 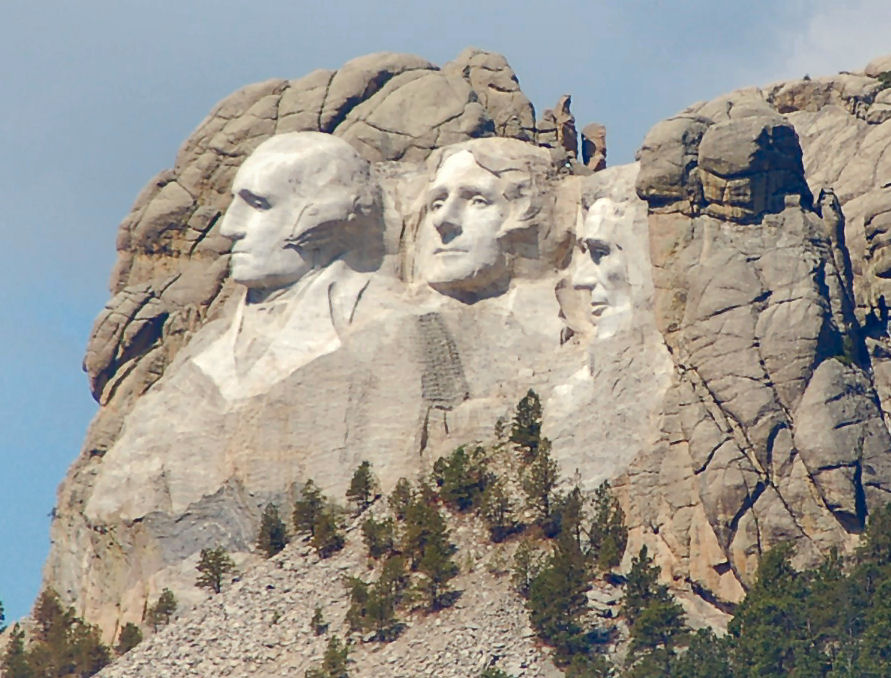 months. We found out we're lucky enough to be off tomorrow evening, which is when the National Park has a large fireworks show over the monument. The workampers have planned a potluck party in our yard to watch the show. We're also lucky to have one of the few RV sites for workers that has a view of the monument. Here's a close-up photo taken from our patio, but we can't see Teddy Roosevelt.