6/26: Lake George Escape Camping Resort, NY. The weather this past week has been great, and the water has gone down tremendously. Part of the RV park is still flooded, and about 100 sites won't be usable for the Fourth of July weekend. This means we'll have to cancel a bunch of families. I'm sure they won't be happy, but there's not much we can do to control Mother Nature. A couple days ago, we were asked to move back to our original camp site. It was mostly dry and good enough for us to move back. We had already unhooked everything and moved the motorhome, when the park manager drives up and tells us plans changed and we don't need to move so soon. Since they plan to fix the sites that were flooded up a bit, we moved the motorhome back to our temporary site. Oh well, we're flexible and we may get some improvements done to our original site. I know we'll need to move back before July 1st, when the RV park is 100%+ booked.

Yesterday, we went with fellow workers, Joe and Grace Morvant, to visit Fort Ticonderoga. In addition to touring the fort, we watched a large reenactment of a battle between the French and the English. This fort was originally built by the French in the 1755. This was a time when France and England were fighting for domination of the New World, with little thought for the Native people in the territory. There's a 250+ mile waterway located between New York City and Montreal that had a strong military value. This waterway is comprised of the Hudson River, Lake George, the La Chute River, and Lake Champlain. Along this waterway trail are three portages to get from one main body of water to the another. The English built Fort William Henry at the Southern portage point at the end of Lake George. The French built Fort St. John North of Lake Champlain, and Fort Carillon at the Southern end of Lake Champlain to command the headwaters of Lake Champlain and the two-mile portage from the outlet of Lake George. After one failed attempt in 1758, the British took the fort in 1759 and renamed it "Ticonderoga". This was during a time known as the "French and Indian War", or known as the "Seven Years War" in Europe. Just three weeks after the first shots of the American Revolutionary war were fired, the armies Ethan Allen and Benedict Arnold converged and conquered Fort Ticonderoga on May 10, 1775. The French and Americans believed a nearby mountain overlooking the fort was too steep to scale. However, in 1777 the British simply placed 6 cannons on nearby Mt. Defiance and the Americans abandoned the fort without a fight. 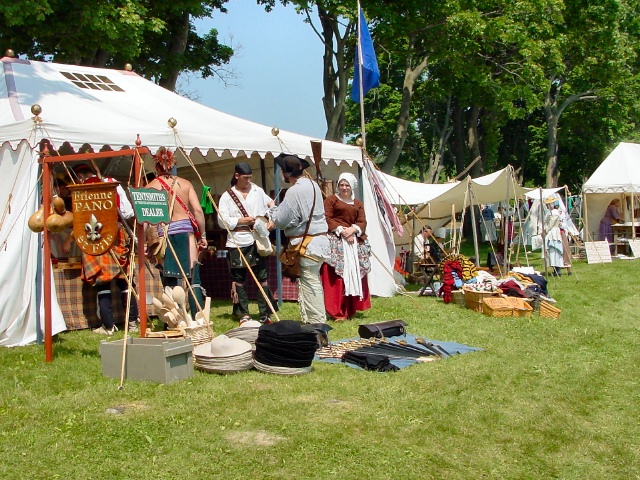 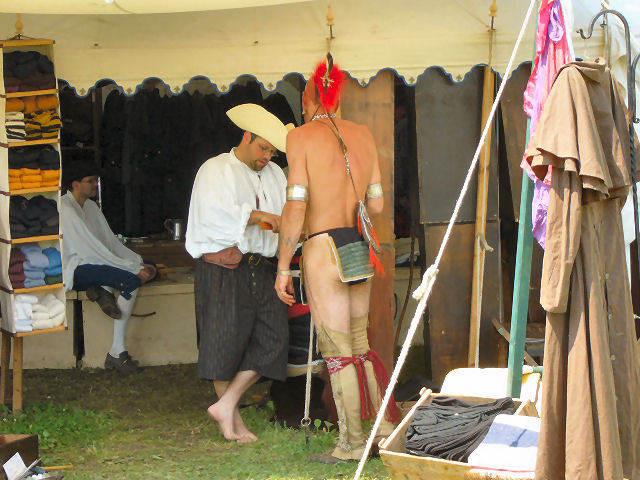 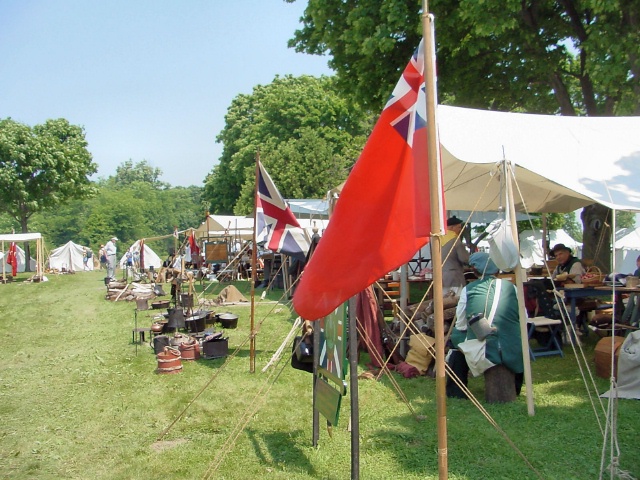 The fort has been rebuilt and is maintained by a non-profit educational foundation. Touring the fort and museum was interesting, but visiting the encampment and watching the reenactment of a battle between the French and British was the highlight of the day. We felt strangely out of place in the encampment, as 90% of the people there were dressed for the period. There were three distinct camps setup. The families camp, the sutler's camp (merchants), and the soldier's camp. These people slept, ate, and camped here using tools just as they did in the mid 1700's. A very interesting encampment. The main event of the day was the mock battle. For over 45 minutes, the two sides (along with native allies) fought each other. Cannons roared, muskets popping, and men chanting and hollering. Women came in to the fields to tend to the wounded. Although it was a hot and humid day, it's one we'll always remember. 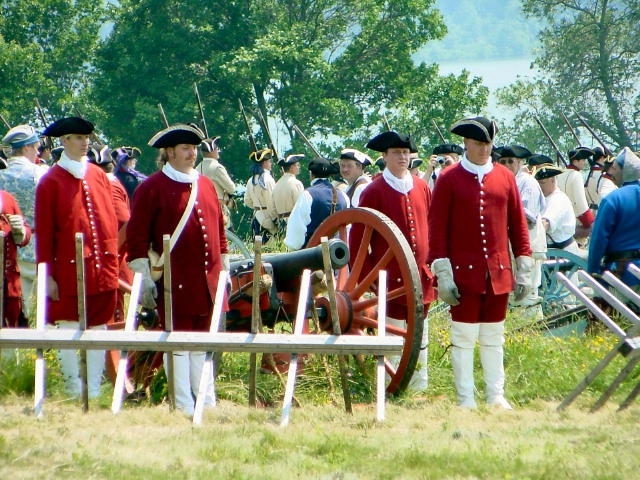 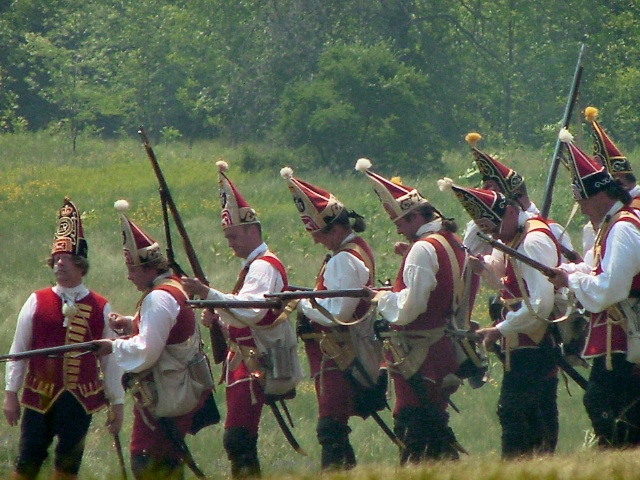 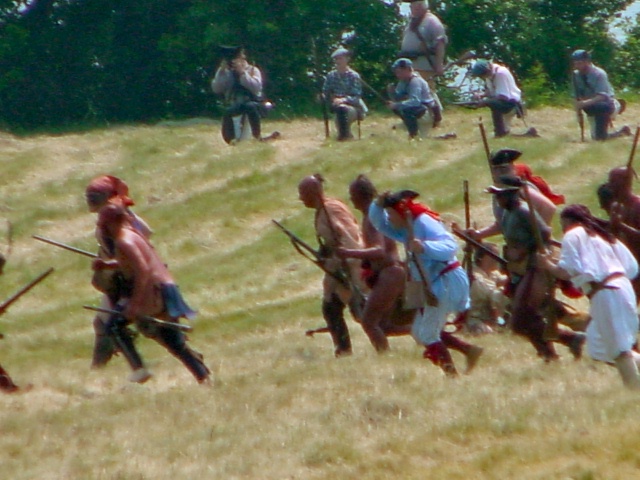 Click here for our photo album of Fort Ticonderoga and the battle reenactment.

6/19: Lake George Escape Camping Resort, NY. If I had to sum this past week in one word, it would simply be "rain". Mucho rain! Due to the heavy rain, the Interstate was closed for a few days, and we were on flood alert. There was strong concern that the dam up river from us would break. Well, the dam held, but we did get flooded. Slowly, over the past week, half of the resort was flooded in much the same way it was when we arrived here in May. We watched the water slowly rise over a few days, getting closer to our motorhome each day. A couple nights ago, the water was still about six feet from our motorhome. However, yesterday morning, the water was 2" above our rear tires. Other people across the street from us weren't as lucky and slowly started getting out of their flooded camp sites. Within a couple hours, the water had risen so much that we had to walk through a couple inches to get to our front door. The water was now over 6" above our rear tires. It was time for us to also pull out to higher ground. At least that's one of the advantages of having a house on wheels. We just packed everything up and drove to safety. The resort management did very well under this small crisis, because guests were also being affected by the over-flowing river. We're now located on a different lot, on higher ground. Once the water has rescinded, we'll move back to our previous spot where we get a good satellite signal. It was a day of adventure, but we're safe and dry. 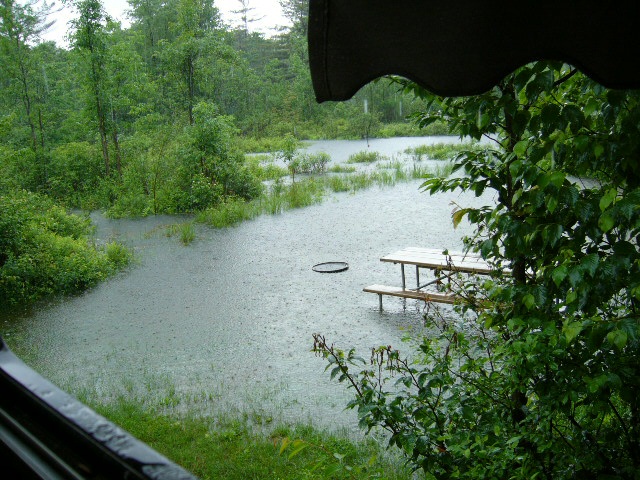 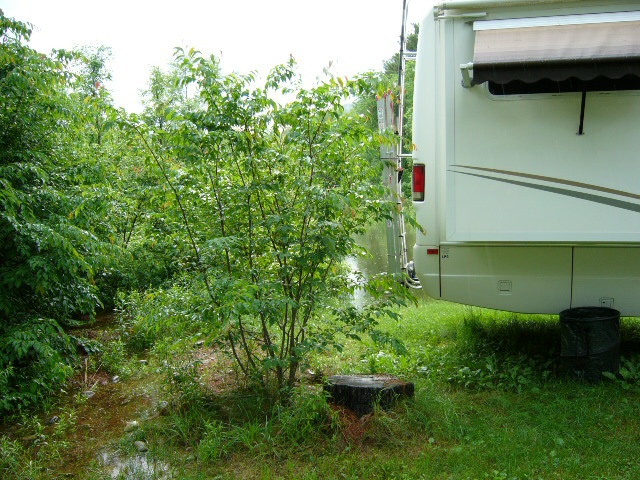 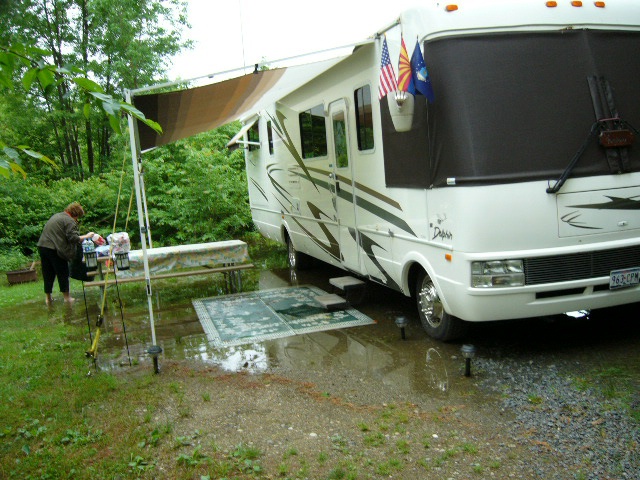 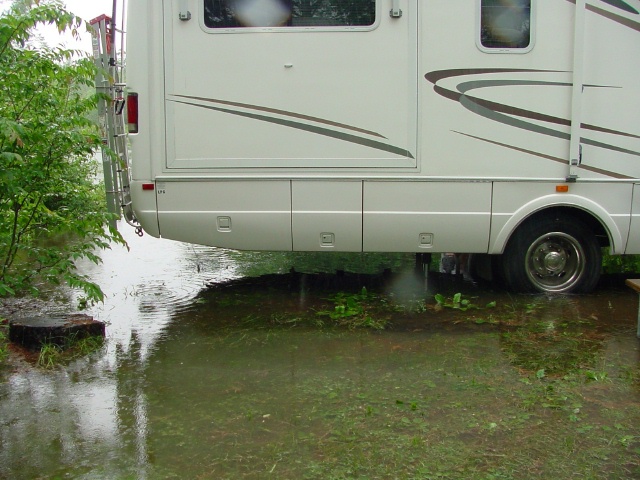 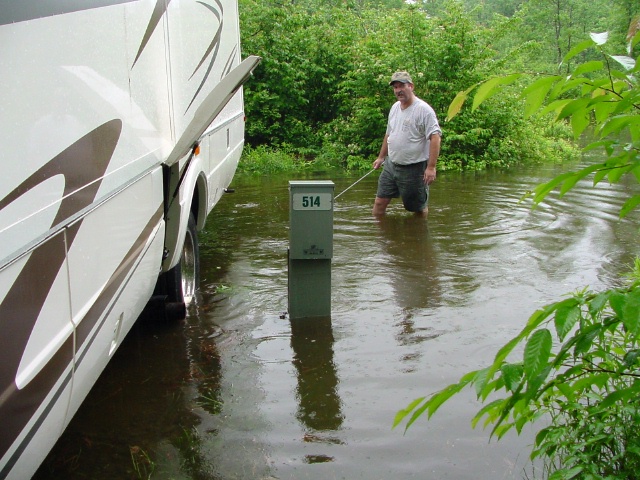 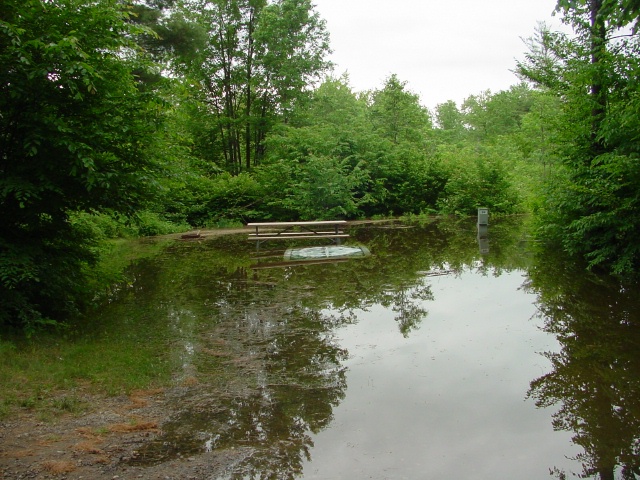 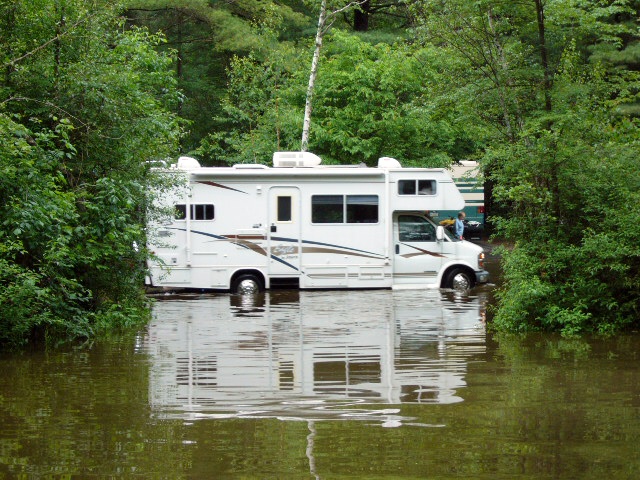 Since the trees are blocking our satellite signals, both Internet and television, we're lucky the RV park has cable TV hookups for us. We use our Verizon cell phones as backup for our Internet connection. Using Verizon's Mobile Office connectivity kit, our cell phone's will dial to the Internet at a pretty decent speed. Minutes used are the same as voice minutes, so we have unlimited minutes after 9:00pm and on weekends. Technology has made living and traveling full-time in a RV much more comfortable. 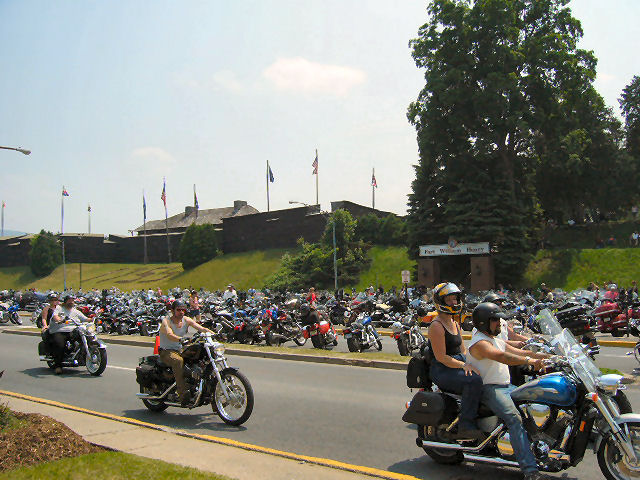 but I'm glad we'll be getting back to normal campers in the park. The motorcycle crowd was pretty well behaved, but the bikes were a bit noisy. Personally, I'd rather see kids having fun on their bicycles than the large motor bikes running all around. But they were neat to look at. Today, we took advantage of our free shuttle and 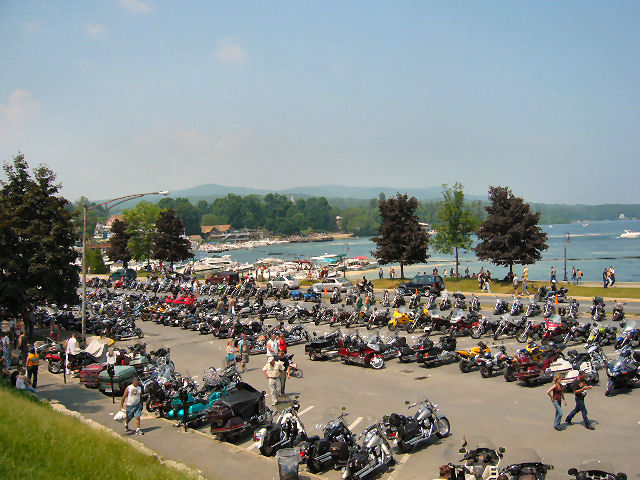 went into the small town of Lake George Village. Located directly on Lake George, we saw the largest assembly of motorcycles I could imagine. Bikers were everywhere! It seemed one of the favorite pastimes was to sit back and watch everyone cruise the streets. However, the 85°+ heat was pretty stifling in the high humidity.

I've seen flagpoles made of PVC pipe that stand about 6' tall, the top portion is angled and rotates with the wind. But I can't find plans to make one. If you know where I can get plans, please This email address is being protected from spambots. You need JavaScript enabled to view it. Thanks!

6/5: Lake George Escape Camping Resort, NY. The weather has been beautiful here and we're getting a regular flow of guests into the park daily now. However, the mosquitoes are also getting pretty intense and are bothersome. The Lake George area is about to be invaded with over 45,000 motorcycle enthusiasts. It's time for the annual Americade Motorcycle Rally. This RV park is 100% booked for the week. We're already seeing most of our guests arriving with their large road bikes and are expecting to have over 1,000 motorcycles in our 600+ campsites. But these aren't the stereotypical "gang" people. These are mostly business and professional people who enjoy their road bike. We're told these are the most well behaved guests we'll have staying here all year. 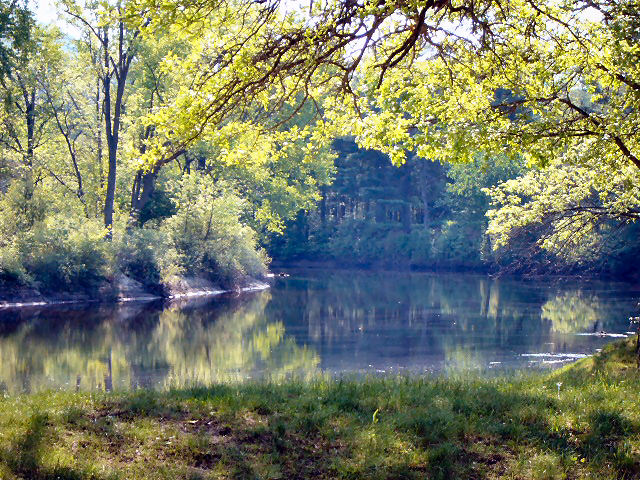 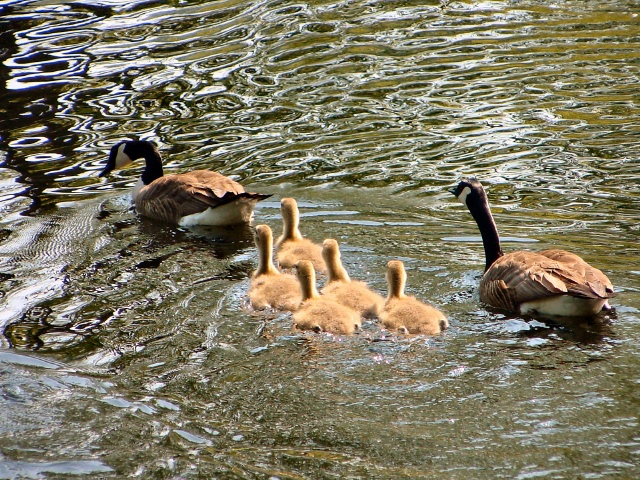 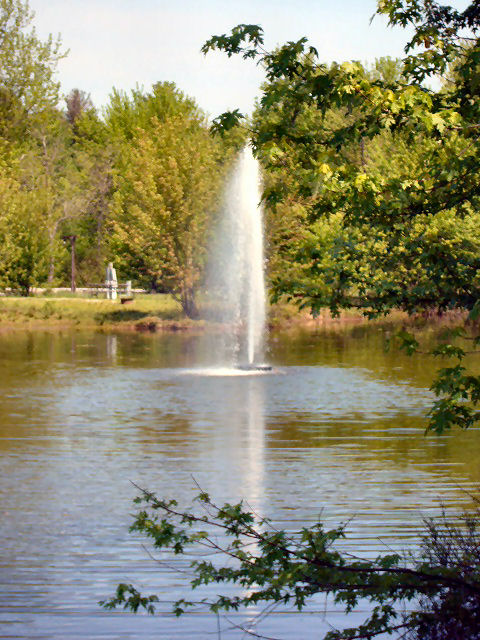 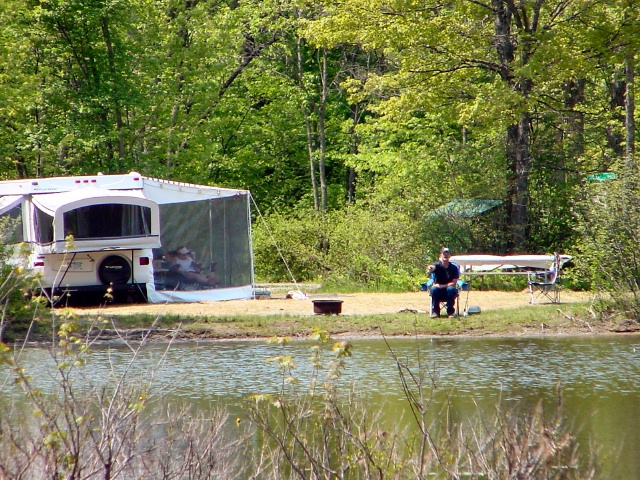 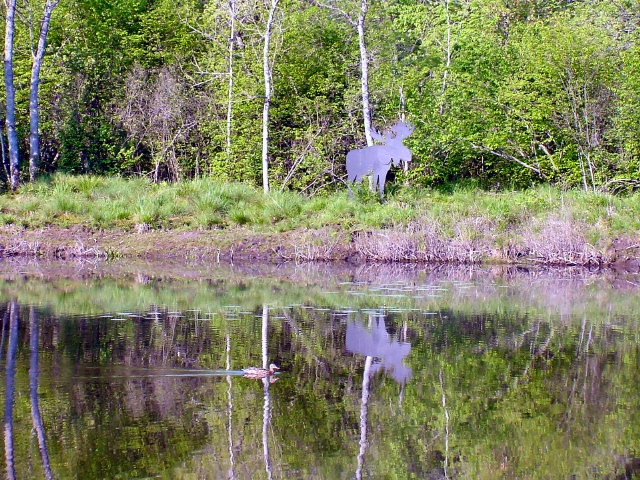 Being a family destination resort, the recreation staff here plans a ton of activities for our younger guests. One of the most popular activities is a "frog hunt". We have a few ponds here, and the largest is called the "frog pond". During the daily frog hunt, kids are encouraged to go catch the largest frog they can. We've seen bullfrogs that would stretch out to be over 12" long. Connie and I watched yesterday's frog hunt and enjoyed watching the kids trying to catch their frogs. It was a bit comical to see the kids sneak up on a frog, then have it jump away from them. One boy caught a frog in his bucket, but it jumped out a minute later. But one boy was successful and caught his 4" leopard frog to win the prize for the day. Of course, there's an alternate motive for this fun. Nearby, the rental hut sells nets to help catch the frogs. But nobody bought anything today. 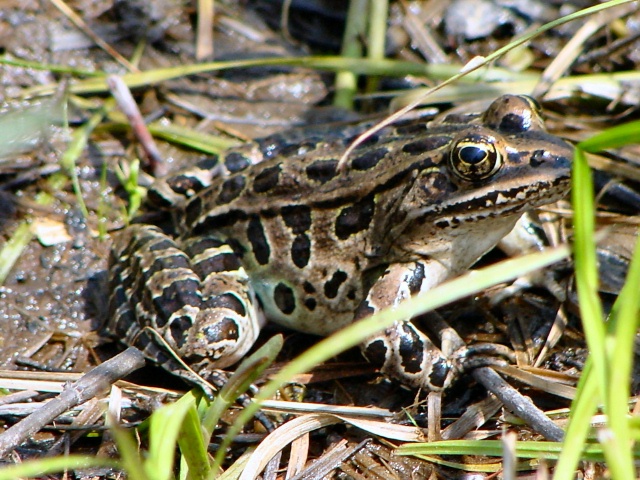 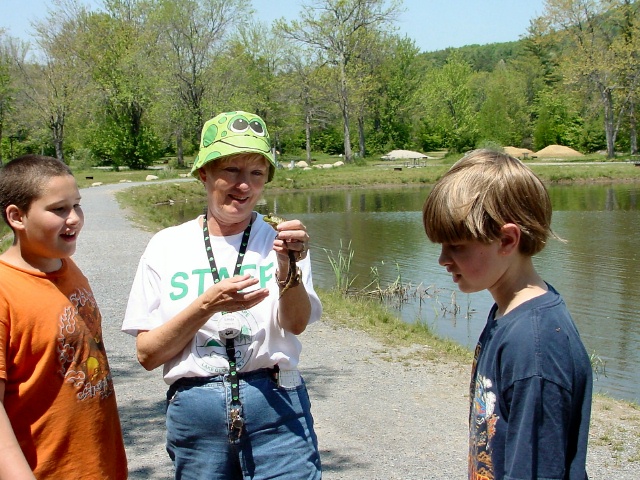 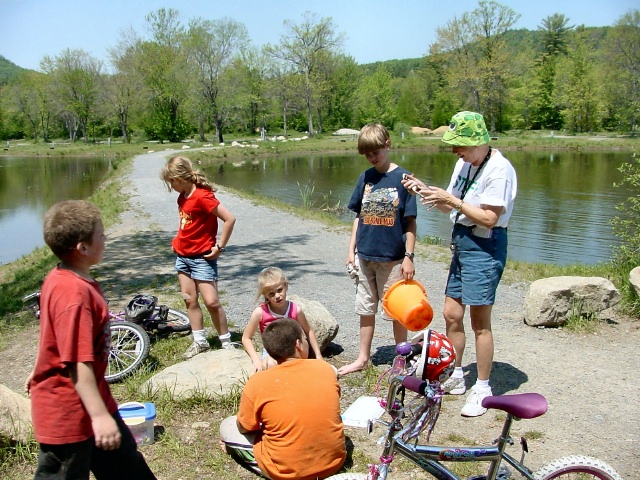