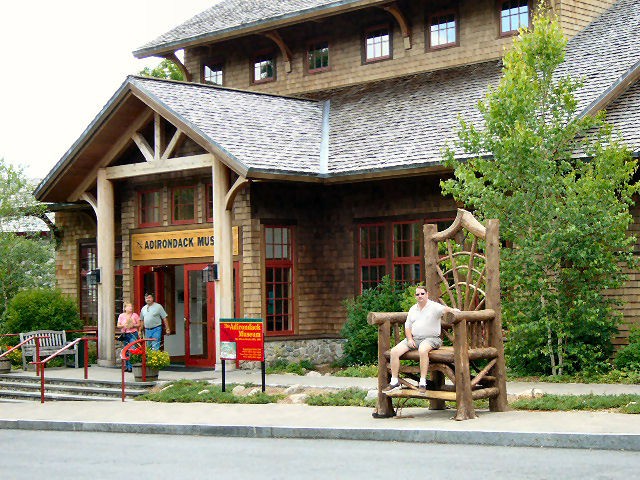 7/30: Lake George Escape Camping Resort. The Adirondack Wilderness is beautiful country. Growing up on the west coast, we never associated this type of mountains with New York state. Earlier this week, we toured the Adirondack Museum, located above Blue Lake. We walked the 32 acres of breathtaking scenery while exploring 22 exhibit buildings. There were displays and information on rustic Adirondack furniture made of bark, twigs, and tree roots, as well as numerous hand-made boats, which was an essential mode of transportation in the early days. There were exhibits on the history of wagons used in the area, logging, tools, and much more. During the Gilded Age of the Adirondacks, great camps and industrialists filled the Adirondack's for recreation and pleasure. We climbed aboard a private luxury railcar, which was used by a wealthy family. We also toured original summer cabins, furnished from the early 1900's. It was another wonderful day, driving through the Adirondack Mountains and visiting this unique museum. 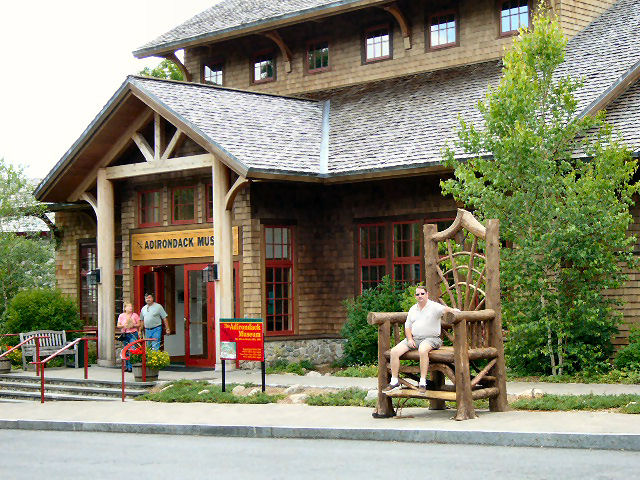 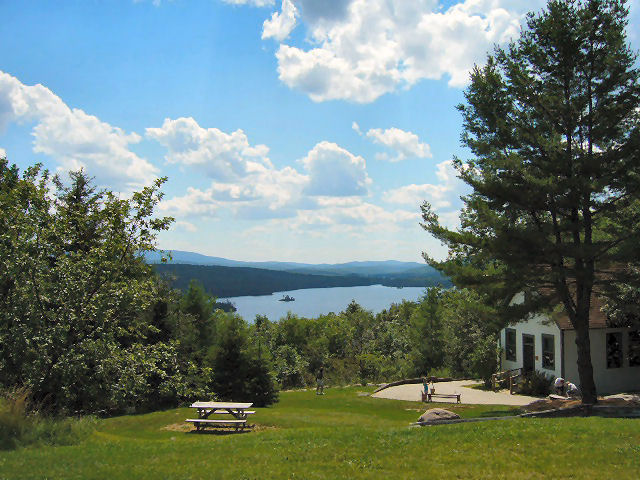 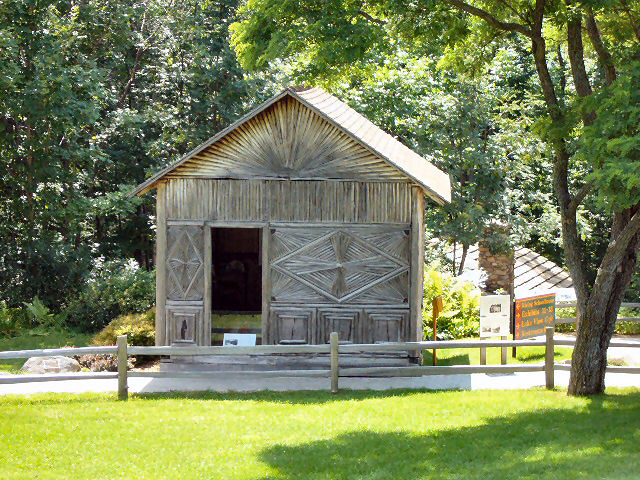 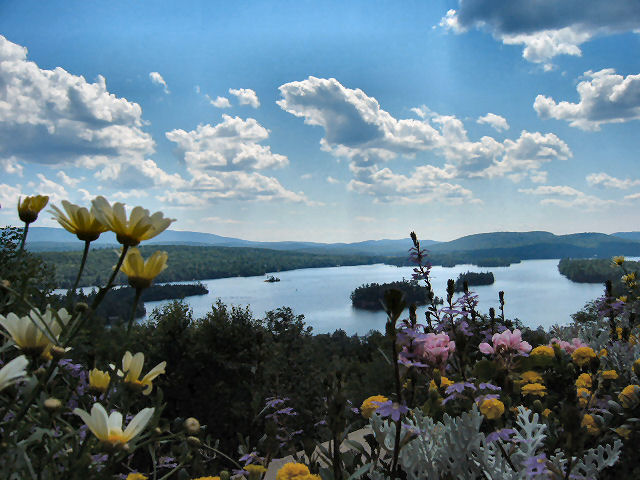 7/25: Lake George Escape Camping Resort, NY. We belong to many Email lists that provide us with information and support for our RV lifestyle. One of these lists, the "RV Full time Travel Yahoo Group" is ran by Allan Pederson. I just recently visited Allan's personal website and read "his story", which has left me speechless. Allan was a US Marine Infantryman in Vietnam. He lost both legs to a landmine. I highly recommend reading Allan's story.

Another link found on Allan's website also had me sitting on the edge of my chair for hours. This is the story of Lewis Haas, who was a POW during World War II. After much prodding from his family, Lewis wrote his story in 1999. Lew passed away the following year at 76 years old. I also highly recommend reading Lew's story

7/23: Lake George Escape Camping Resort, NY. Things have been busy in the campground, with high occupancy almost every night. This weekend, and the next few weekends are fully booked. We haven't had many complaints recently, since the weather has been sunny and warm with not much humidity. Even the mosquitoes have decided not to be as much of a bother. To give you an idea of the complaints we've heard in the past couple months, I wrote a short article I called "City Campers".

Being a camping resort for families, the campground has themes each week. Most of the games, activities, and crafts revolve around the theme for the week. In the coming weeks is Halloween week, Western Roundup week, and Mardi Gras. This week's theme was Winter Wonderland. We've been celebrating Thanksgiving, Christmas and New Years in July! Even though Saturday is our normal day off, we worked for a couple hours to help at the Christmas party. A TON of kids attended and made small gingerbread houses. They sure had fun! Connie was dressed in her Christmas dance clothes and took pictures of the kids visiting Santa. Larry had the pleasure of being Santa Claus, with Ron, a regular park guest, being an elf. It was wonderful to see the excitement and love in the kids faces. The experience was well worth the price of being dressed in fur in the July sun for a couple hours. 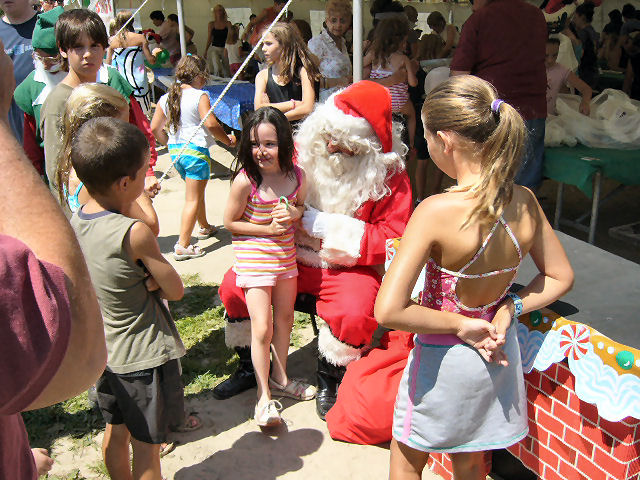 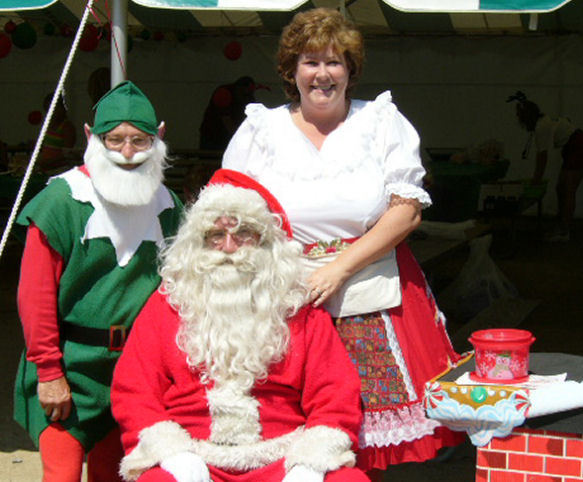 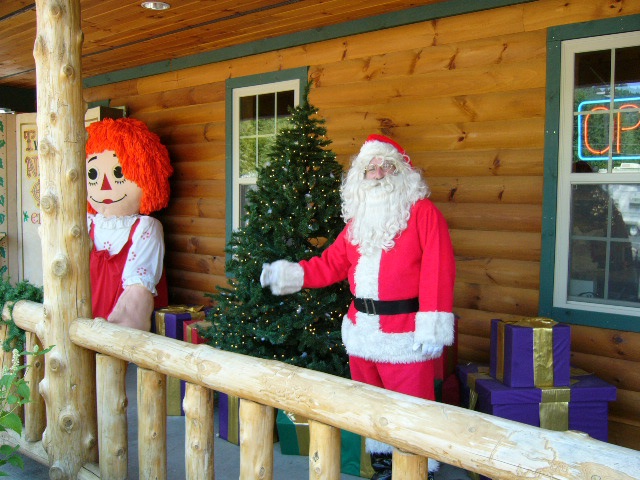 7/16: Lake George Escape Camping Resort, NY. Just as in a sticks-n-bricks house, our house on wheels needs periodic maintenance and has it's problems. For the past couple months, our ice maker had a serious water leak. Of course, it was in a location I couldn't reach. Planning on having the "shop" look at it when we left Lake George, we turned it off and having been buying bagged ice. Yesterday, Connie felt productive and defrosted the freezer again. She noticed the water line to the ice maker was plugged up with ice. She was right! After thawing the ice out and unplugging the line, the ice maker is working great again! However, now the electric water heater has stopped heating. Luckily, the propane water heater is working great. 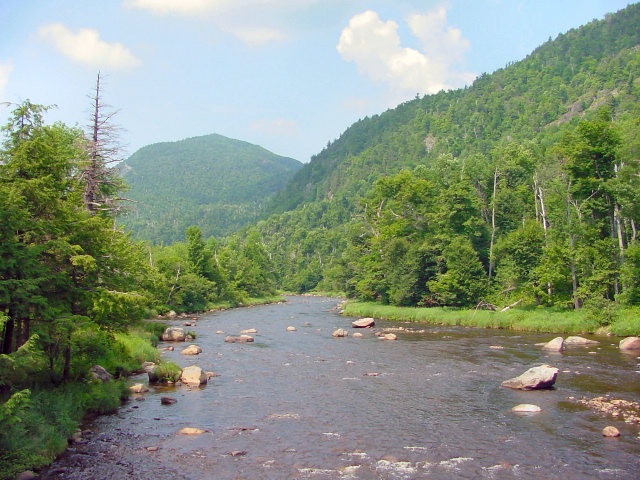 Time here is flying by! While each day seems to take it's time, the entire week is over before we know it. We've only seen a fraction of the sights we wanted to see, so we've made a list and will try to get out every chance we can. Today, we took advantage of another free familiarization ticket to the High Falls Gorge Adventure Center, which was an hour away from us near Lake Placid. It was 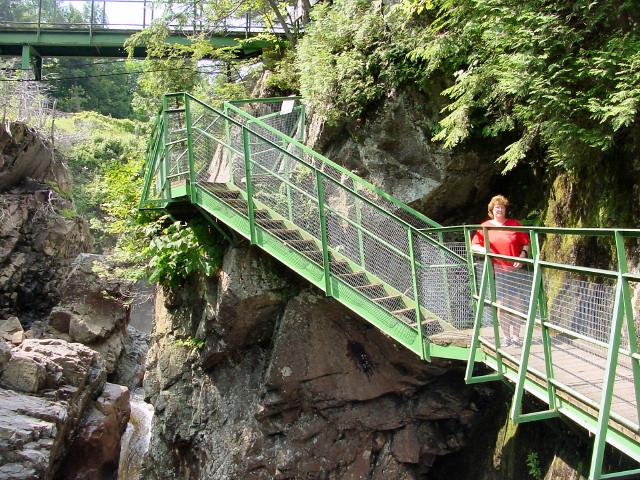 another nice day as we made our way North. It normally costs almost $10 to view the 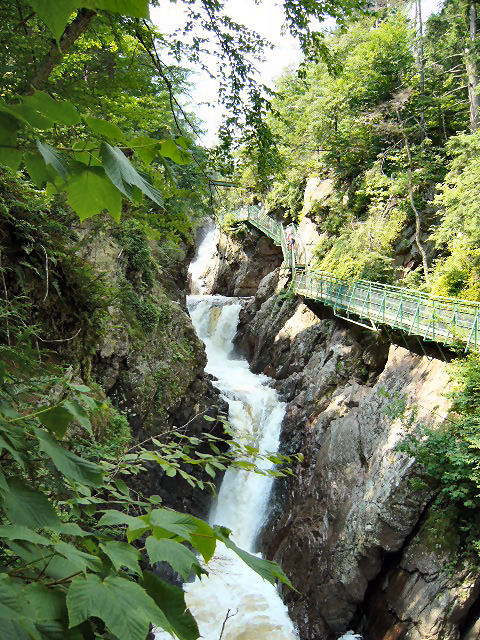 High Falls Gorge, which is in the shadows of the Whiteface Mountain. Here, you take a short hike along the AuSable River and watch as it rushes through deep crevices on it's 700 foot decent. Hiking on catwalks and on suspension bridges, you get a good view of the gorge and waterfalls. It was nice and scenic, but we didn't think it would be worth $10. The walk lasted around 30 minutes. We've seen much larger and more scenic gorges on free public land. I guess a tourist from New York City would think this was fantastic, though, as there were quite a few visitors.

While in the area, we also visited the mountain town of Lake Placid, NY. This was the site of the 1932 and 1980 winter Olympics. Although it was another tourist town, it's still very active with USA Olympic team training. We had a wonderful lunch across the street from the Olympic stadium, where ice skating events were, and still are held. We saw ice skaters practicing on the rink used for the 1932 Olympics. We rested in the cool air and watched the Zamboni clean the ice in the 1980 ice rink. Nearby were the snow skiing jump towers. We never imagined this is how they looked; large towers standing up on a mountain. Even though it's summer, skiers were practicing their high distance jumps. Instead of paying the admission to get close, we watched from across the street. We don't know if they had artificial snow to ski down, or what. We could see that the landing area wasn't snow. Perhaps plastic rollers? 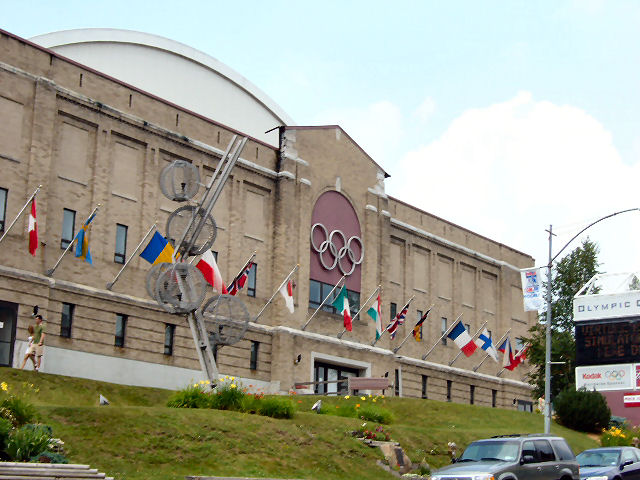 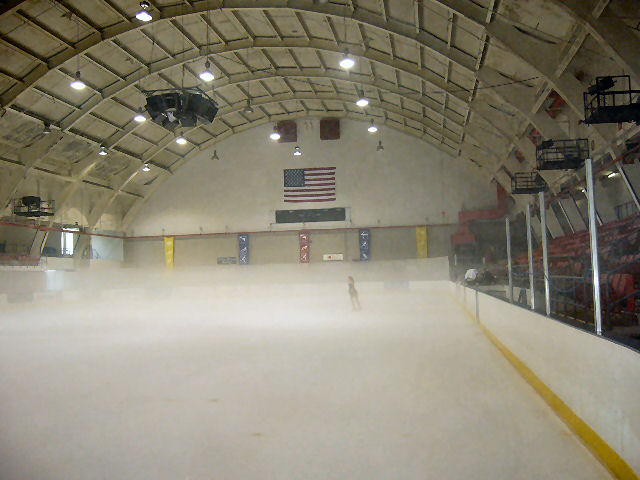 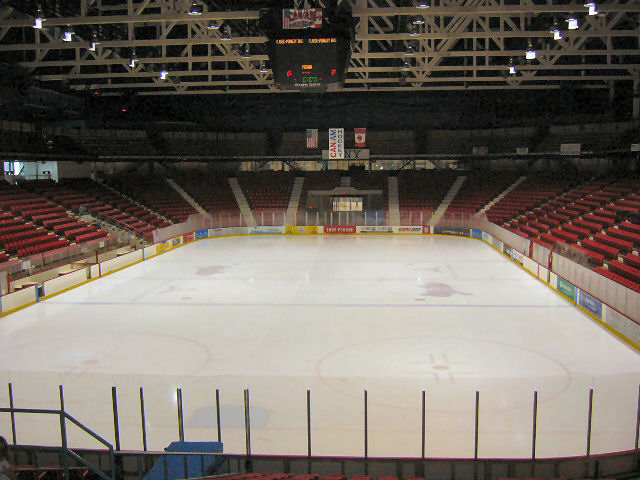 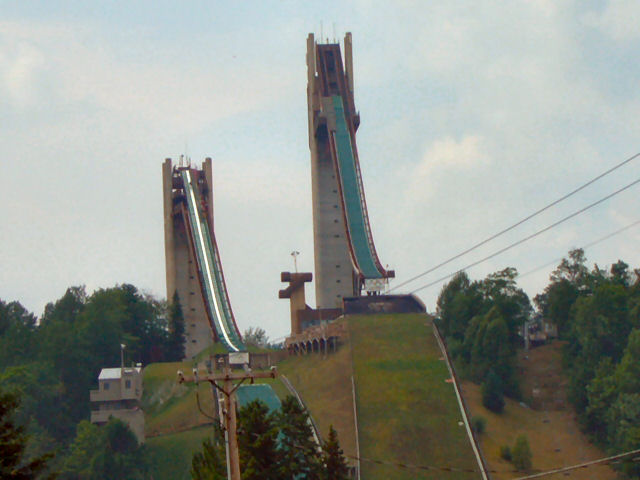 7/10: Lake George Escape Camping Resort, NY. Time sure flies by when you're having fun! We were half-way through our commitment here (until Labor Day), and were starting to plan where to go next. However, our managers asked us to stay on until the resort closes on October 10th. We'll only have to work about 3 days a week, but will get our site free the entire time and paid for all hours work (no working free for the site). We agreed, and plan to explore the Fall colors during our 4 days off each week, which starts after Labor Day weekend. We'll use the resort as a home base for the month of September and return to work on weekends.

We had another surprise during this past week. Management was reluctant to hire the both of us to work in the same department. They took a chance and let us work together. There was one other couple in the entire resort that they allowed to work together and they also worked in reservations. In our office, all 14 workampers seemed happy with no problems with management or each other. One day, the other couple didn't return after lunch. They packed up and left! This was totally unexpected and unexplained. They never complained about anything, or hinted there was any problems. They seemed happy. Don is a university professor in Southern Arizona, but I feel leaving the way they did without any warning was totally unprofessional and rude. They didn't bother to say goodbye to anyone. This couple even paid for themselves to fly from Arizona to New York for a job interview last year. We just did telephone interviews. They knew exactly what the pay and benefits were, and what was expected from them. If they had doubts about this job, they should never had taken it. For whatever reason they left, I'm sure it wasn't a conflict with co-workers or management; It was an issue within themselves. However, the two of them leaving hurt the department and I'm sure management won't consider hiring a couple to work the same department again. Loosing two at once is a big hit. Connie and I love our job, and have no intention of leaving. 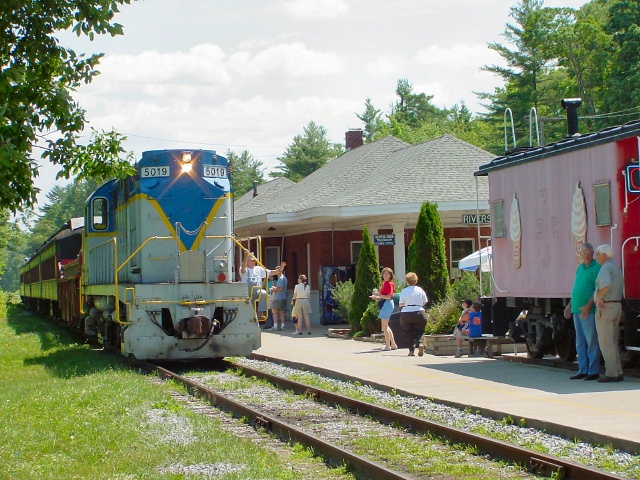 We're getting tired of all the rain we've been having. But today was beautiful! We took advantage of the good weather on our day off. One of the fringe benefits here 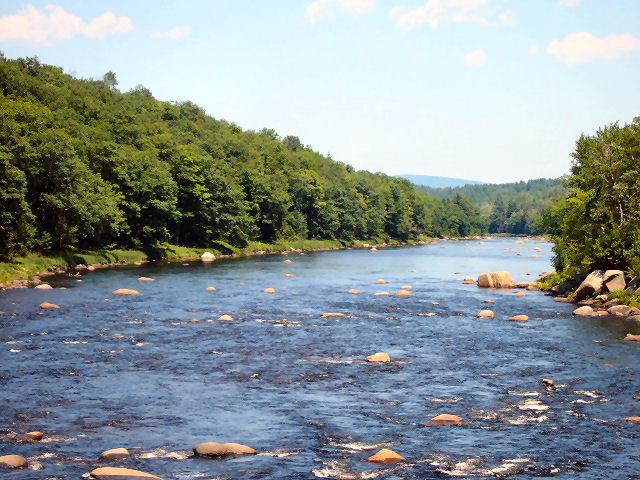 , is we get free or reduced passes to many of the local attractions. Today was a free trip on the Upper Hudson Railroad. This train trip lasted over 2 hours and took us from North Creek along the Hudson River in the Adirondack mountains to Riverside, then back. A beautiful, scenic, and enjoyable trip. MUCH better than the supposedly scenic train trip we took in Australia.

7/3: Lake George Escape Camping Resort, NY. We've done it! We checked-in over 500 camping sites in the past two days. With the recent flooding, it went smoother than we expected. We still had the usual complaints, but everyone finally got settled in. The weather rained some, but has been beautiful this past weekend. That helped put everyone in good moods. Last month, I mentioned we might close 100 sites. It ended up being only 24 sites that were flooded for the weekend. The managers called over 100 guests that were staying in tents and offered them full refunds if they cancelled. If they didn't cancel, at least they were aware their camp site would be muddy with puddles of water and didn't have grounds to complain. Surprisingly, most people didn't want to cancel. But we did finally get the needed 24 sites canceled.

We've moved back into our original camp site and hope we can stay here until we leave. This is the sixth time we've setup camp. Otherwise, we didn't do anything special this past week, or weekend. Being a holiday, everything is extremely crowded. Eighteen months ago, we volunteered to publish the newsletter for our Escapees Boomer group. Every month, we're responsible for getting 4250 photocopies done and made into 425 newsletters. We attach mailing labels and stamps to them and send them off to our members. It was that "time of the month" again, so we worked on them. Larry also worked/played on getting the RV Webcam operational. Every minute, this camera will send in a photo from our front windshield. Of course, it'll only be working when we're parked and have Internet access. Check it out.